The Best Intentions: Unintended Pregnancy and the Well-Being of Children and Families (1995)

Get This Book
Visit NAP.edu/10766 to get more information about this book, to buy it in print, or to download it as a free PDF.
Page i Share Cite
Suggested Citation:"Front Matter." Institute of Medicine. 1995. The Best Intentions: Unintended Pregnancy and the Well-Being of Children and Families. Washington, DC: The National Academies Press. doi: 10.17226/4903.
×

Unintended Pregnancy and the Well-Being of Children and Families

The Institute of Medicine was chartered in 1970 by the National Academy of Sciences to enlist distinguished members of the appropriate professions in the examination of policy matters pertaining to the health of the public. In this, the Institute acts under both the Academy's 1863 congressional charter responsibility to be an adviser to the federal government and its own initiative in identifying issues of medical care, research, and education. Dr. Kenneth I. Shine is president of the Institute of Medicine.

This project was funded by the Carnegie Corporation of New York, which does not take responsibility for any statements or views expressed; the Robert Wood Johnson Foundation; and the U.S. Public Health Service (specifically the Maternal and Child Health Bureau, the Centers for Disease Control and Prevention, the National Institute of Child Health and Human Development, and the Office of Population Affairs).

The best intentions: unintended pregnancy and the well-being of children and families / Committee on Unintended Pregnancy, Institute of Medicine, National Academy of Sciences; Sarah S. Brown and Leon Eisenberg, editors.

The serpent has been a symbol of long life, healing, and knowledge among almost all cultures and religions since the beginning of recorded history. The image adopted as a logotype by the Institute of Medicine is based on relief carving from ancient Greece, now held by the Staatlichemuseen in Berlin.

Center for Demography and Ecology, University of Wisconsin at Madison

(liaison from the Board on Children and Families, jointly sponsored by the Commission on Behavioral and Social Sciences and Education and the Institute of Medicine)

School of Public Health, University of Alabama at Birmingham

George A. Little, Professor of Pediatrics and Obstetrics and Gynecology,

This report on unintended pregnancy represents the collaborative efforts of many groups and individuals, particularly the supervising committee and staff whose names appear at the beginning of this document. The topic addressed by this study proved to be an unusually complicated one, and it required great dedication and effort by all concerned to complete the report that appears here.

Particularly helpful were the many papers developed for the committee; a full listing of them is in Appendix A. These papers assisted the committee in understanding and integrating many disparate sets of information. In addition, major portions of some papers were incorporated directly into the report itself. For example, material drafted by Kristin Moore and Dana Glei formed the backbone of Chapter 2; sections drafted by Jim Marks and Kristin Moore and by committee members Larry Bumpass, George Little, Sara McLanahan, and, in particular, Carol Hogue, were relied on heavily in Chapter 3; the work of committee member Allan Rosenfield and of Lisa Kaeser, Cory Richards, Jane Brown, and Jeanne Steele contributed to much of Chapter 5; a review article by Nancy Adler and Warren Miller assisted in the conceptualization of Chapter 6; and the work of committee members Lorraine Klerman and Marie McCormick and of Vanessa Gamble, Judith Houck, Mort Lebow, William D'Antonio, and Allan Carlson contributed substantially to Chapter 7. Rebecca Maynard and committee members Mark Montgomery and Lorraine Klerman also provided much helpful material for Chapter 8. Finally, it is important to acknowledge the particular contributions of committee members Carol Hogue, Larry Bumpass, and Mark Montgomery who developed important technical materials in Appendixes D, E, and G, respectively. All sections benefited enormously from the careful review of research on the determinants of contraceptive use

developed by Koray Tanfer, as well as from the thoughtful paper on men and family planning by Freya Sonenstein and Joseph Pleck. To all of these scientists and others listed in Appendix A, the committee expresses its deep admiration and appreciation.

The Institute of Medicine staff who assured the completion of this document, Dana Hotra and Alison Smith, worked exceedingly hard on this project and have the deepest respect and appreciation of all concerned. Dana helped to draft much of Chapter 2 and completed virtually all of Chapters 4 and 8 and Appendix F. Alison drafted two key sections of Chapter 3 and also prepared the manuscript for publication. In doing so she improved the appearance and accuracy of the final product immeasurably. Finally, we acknowledge the many contributions of our editors, Mike Edington, Michael Hayes, and Elaine McGarragh.

This report was funded by the combined efforts of three groups: the Carnegie Corporation of New York, the Robert Wood Johnson Foundation, and the U.S. Public Health Service (specifically the Maternal and Child Health Bureau, the Centers for Disease Control and Prevention, the National Institute of Child Health and Human Development, and the Office of Population Affairs). Their willingness to finance a study on the causes, consequences, and prevention of unintended pregnancy took no small degree of commitment, inasmuch as this issue continues to be sensitive, even controversial, in some sectors. Their encouragement and funding are gratefully acknowledged.

Next: Summary »
The Best Intentions: Unintended Pregnancy and the Well-Being of Children and Families Get This Book
× 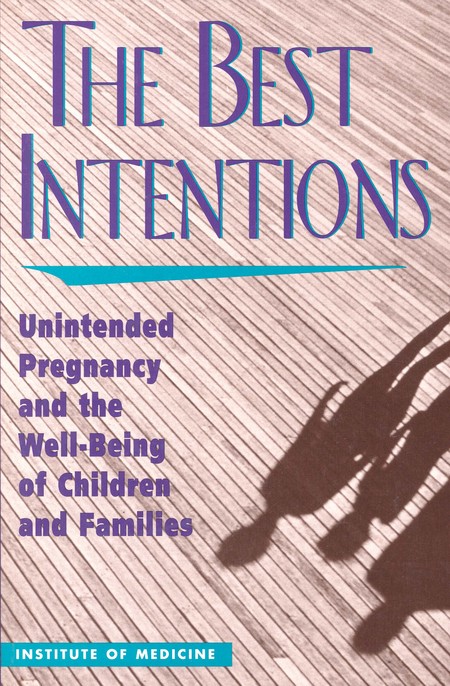 Experts estimate that nearly 60 percent of all U.S. pregnancies—and 81 percent of pregnancies among adolescents—are unintended. Yet the topic of preventing these unintended pregnancies has long been treated gingerly because of personal sensitivities and public controversies, especially the angry debate over abortion. Additionally, child welfare advocates long have overlooked the connection between pregnancy planning and the improved well-being of families and communities that results when children are wanted.

Now, current issues—health care and welfare reform, and the new international focus on population—are drawing attention to the consequences of unintended pregnancy. In this climate The Best Intentions offers a timely exploration of family planning issues from a distinguished panel of experts.

This committee sheds much-needed light on the questions and controversies surrounding unintended pregnancy. The book offers specific recommendations to put the United States on par with other developed nations in terms of contraceptive attitudes and policies, and it considers the effectiveness of over 20 pregnancy prevention programs.

The Best Intentions explores problematic definitions—"unintended" versus "unwanted" versus "mistimed"—and presents data on pregnancy rates and trends. The book also summarizes the health and social consequences of unintended pregnancies, for both men and women, and for the children they bear.

Why does unintended pregnancy occur? In discussions of "reasons behind the rates," the book examines Americans' ambivalence about sexuality and the many other social, cultural, religious, and economic factors that affect our approach to contraception. The committee explores the complicated web of peer pressure, life aspirations, and notions of romance that shape an individual's decisions about sex, contraception, and pregnancy. And the book looks at such practical issues as the attitudes of doctors toward birth control and the place of contraception in both health insurance and "managed care."

The Best Intentions offers frank discussion, synthesis of data, and policy recommendations on one of today's most sensitive social topics. This book will be important to policymakers, health and social service personnel, foundation executives, opinion leaders, researchers, and concerned individuals.