Tempo and Mode in Evolution: Genetics and Paleontology 50 Years After Simpson (1995)

Get This Book
Visit NAP.edu/10766 to get more information about this book, to buy it in print, or to download it as a free PDF.
Page i Share Cite
Suggested Citation:"Front Matter." National Academy of Sciences. 1995. Tempo and Mode in Evolution: Genetics and Paleontology 50 Years After Simpson. Washington, DC: The National Academies Press. doi: 10.17226/4910.
×

Tempo And Mode In Evolution

Genetics And Paleontology 50 Years After Simpson

This volume is based on the National Academy of Sciences' Colloquium on the Tempo and Mode of Evolution. The articles appearing in these pages were contributed by speakers at the colloquium and have not been independently reviewed. Any opinions, findings, conclusions, or recommendations expressed in this volume are those of the authors and do not necessarily reflect the views of the National Academy of Sciences.

Tempo and mode in evolution: genetics and paleontology 50 years after Simpson/Walter M. Fitch and Francisco J. Ayala, editors, for the National Academy of Sciences.

George Gaylord Simpson said in his classic Tempo and Mode in Evolution (1944) that paleontologists enjoy special advantages over geneticists on two evolutionary topics. One general topic, suggested by the word "tempo," has to do with "evolutionary rates…, their acceleration and deceleration, the conditions of exceptionally slow or rapid evolutions, and phenomena suggestive of inertia and momentum." A group of related problems, implied by the word "mode," involves "the study of the way, manner, or pattern of evolution, a study in which tempo is a basic factor, but which embraces considerably more than tempo'' (pp. xvii–xviii).

Simpson's book was self-consciously written in the wake of Theodosius Dobzhansky's Genetics and the Origin of Species (1937). The title of Dobzhansky's book suggested its theme: the role of genetics in explaining "the origin of species"—i.e., a synthesis of Darwin's theory of evolution by natural selection and the maturing science of genetics. In the introduction to his book, Simpson averred that an essential part of his study was an "attempted synthesis of paleontology and genetics," an effort that pervaded the whole book, but was particularly the subject of the first two chapters, which accounted for nearly half the book's pages.

Darwin believed that evolutionary change occurs by natural selection of small individual differences appearing every generation within any species. Singly the changes effected by selection are small but, given enough time, great changes can take place. Two of Darwin's most dedicated supporters, Thomas Huxley and Francis Galton, argued

instead that evolution occurs by selection of discontinuous variations, or sports; evolution proceeds rapidly by discrete leaps. According to Huxley, if natural selection operates only upon gradual differences among individuals, the gaps between existing species and in the paleontological record could not be explained. For Galton, evolution was not a smooth and uniform process, but proceeded by "jerks," some of which imply considerable organic change.

This controversy was continued in the latter part of the nineteenth century by the biometricians Karl Pearson and W. F. R. Weldon, who believed, like Darwin, in the primary importance of common individual differences, and by the geneticist William Bateson, who maintained the primary importance of discontinuous variations. The rediscovery of Mendelian inheritance in 1900 provided what might have been common grounds to resolve the conflict. Instead, the dispute between biometricians and geneticists extended to continental Europe and to the United States. Bateson was the champion of the Mendelians, many of whom accepted the mutation theory proposed by De Vries, and denied that natural selection played a major role in evolution. The biometricians for their part argued that Mendelian characters were sports of little importance to the evolutionary process.

The conflict between Mendelians and biometricians was resolved between 1918 and 1931 by the work of R. A. Fisher and J. B. S. Haldane in England, Sewall Wright in the United States, and S. S. Chetverikov in Russia. Independently of each other, these authors proposed theoretical models of evolutionary processes which integrate Mendelian inheritance, natural selection, and biometrical knowledge.

The work of these authors, however, had a limited impact on the biology of the time, because it was formulated in difficult mathematical language and because it was largely theoretical with little empirical support. Dobzhansky's Genetics and the Origin of Species completed the integration of Darwinsim and Mendelism in two ways. First, he gathered the empirical evidence that corroborated the mathematico-theoretical framework. Second, he extended the integration of genetics with Darwinism beyond the range of issues treated by the mathematicians, into critical evolutionary issues, such as the problem of speciation, not readily amenable to mathematical treatment. Moreover, Dobzhansky's book was written in prose that biologists could understand.

The formulation of the modern theory of evolution may well be traced to the publication in 1937 of Genetics and the Origin of Species (second edition in 1941; third in 1951). Several important books appeared in the ensuing years that deepened the synthesis and extended it to subjects, such as systematics (Ernst Mayr, Systematics and the Origin of Species, 1942), zoology (Julian S. Huxley, Evolution: The Modern Synthesis, 1942),

The first two chapters of Tempo and Mode embraced a subject totally innovative at the time. Simpson first defined rates of evolution as resultants of genetic change. Then, he elucidated the contribution of various population genetic "determinants" to evolutionary rates. Simpson's determinants are variability, rate and effect of mutations, generation length, population size, and natural selection. Many of his conclusions have resisted the test of time: variability within populations and not between populations is of consequence in determining evolutionary rates; high variability is "a sort of bank in which mutations are on deposit, available when needed" so that populations need not wait for mutation to occur; mutations per gene are rare, but per population they are not; mutations with small effects are much more frequent than those with relatively large effects; rates of evolution are time dependent, rather than generation dependent; selection is more effective in large than in very small populations; and a myriad other insights and clever calculations that illustrate conceptual points.

Simpson develops a wonderful argument against the misconception that selection is purely a negative process. Selection controls the frequencies of different genes in a population and thus it determines, within limits, which combinations will be realized and in what proportions. Thus selection does not "simply kill off or permit to live fixed types of organisms delivered to it … Selection also determines which among the millions of possible types of organisms will actually arise, and it is therefore a truly creative factor in evolution" (p. 80).

Many current motifs in paleontology appeared first in Tempo and Mode , at least in their modern definition. Simpson had much of interest to say about the differentiating characteristics of microevolution and macroevolution and about the troubling (at the time) issue of discontinuities in the fossil record. Discontinuities result, on occasion, from deficiencies of the fossil record; but often, as in the origin of mammalian orders and other major transitions, because animals were evolving at unusually high rates. Increased rates of evolution ensue, in part, from reduced population numbers, a state of affairs likely when new niches or adaptive zones are invaded.

Simpson saw that low rates as well as high rates of evolution occur in the record. He called them "bradytelic" and "tachytelic" rates, and "horotelic" those that evolve at the standard rate of the group. The stasis that proponents of punctuated equilibrium would stress three decades later, Simpson recognized in the "so-called living fossils, groups that survive today and that show relatively little change since the very remote time when they first appeared in the fossil record'' (p. 124).

Similarly, "major transitions do take place at relatively great rates over short periods of times and in special circumstances" (p. 207).

Simpson failed to anticipate that molecular biology would make it possible to measure rates of evolution "most desirably" as "amount of genetic change in a population per year, century, or other unit of absolute time" (p. 3). He was defeatist on this subject. Immediately after the phrase just quoted, he wrote: "This definition is, however, unusable in practice." It would be unfair to claim lack of vision here, where nothing short of a sorcerer's clairvoyance could have anticipated the magician's tricks of molecular biology and its boundless contributions to elucidating the history of evolution. It is in this respect that the papers that follow depart the most from the themes of Tempo and Mode in Evolution. Indeed, most of what is now known about phylogenetic relationships among organisms that lived during the first three billion years of life on earth is an outcome of molecular biology; and three billion years amounts to most of the history of life.

The sixteen papers that follow were presented and discussed at a colloquium sponsored by the National Academy of Sciences to celebrate the 50th anniversary of the publication of Simpson's Tempo and Mode in Evolution. The Colloquium was held on January 27–29, 1994, at full capacity in the Academy's splendid facility in Irvine, California, the Arnold and Mabel Beckman Center. We are grateful to the NAS for the generous grant that financed the Colloquium, and to the staff of the Beckman Center for their skill and generous assistance.

Next: Early Life »
Tempo and Mode in Evolution: Genetics and Paleontology 50 Years After Simpson Get This Book
× 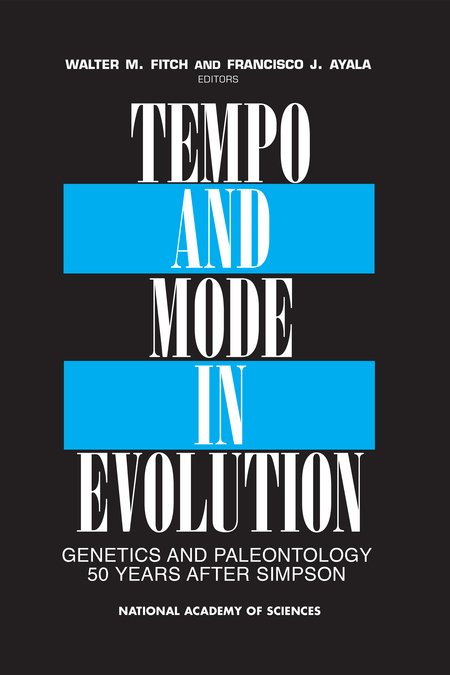 Since George Gaylord Simpson published Tempo and Mode in Evolution in 1944, discoveries in paleontology and genetics have abounded. This volume brings together the findings and insights of today's leading experts in the study of evolution, including Ayala, W. Ford Doolittle, and Stephen Jay Gould.

The volume examines early cellular evolution, explores changes in the tempo of evolution between the Precambrian and Phanerozoic periods, and reconstructs the Cambrian evolutionary burst. Long-neglected despite Darwin's interest in it, species extinction is discussed in detail.

Although the absence of data kept Simpson from exploring human evolution in his book, the current volume covers morphological and genetic changes in human populations, contradicting the popular claim that all modern humans descend from a single woman.

This book discusses the role of molecular clocks, the results of evolution in 12 populations of Escherichia coli propagated for 10,000 generations, a physical map of Drosophila chromosomes, and evidence for "hitchhiking" by mutations.