APPENDIX D 177 Appendix D Accuracy Definitions And Mathematical Relationships Expressions of accuracy stated in this report, unless otherwise noted, are designated as 2 drms.1 When referring to horizontal positioning, 2 drms is defined as where ÏN2 and ÏE2, are the variances of the north and east position estimates respectively. The quantity is generally considered to be the uncertainty in the estimation of the two-dimensional (horizontal) position and is called the distance root mean square positional error. Under the simplifying assumption that ÏN2 = ÏE2 and that the errors are independent and normally distributed, the probability that the positional errors are less than 2 drms is 98 percent. In other words, 98 percent of the time in repeated determinations of the horizontal position, the errors will be less than the 2 drms value. In actuality, the percentage of horizontal positions contained within the 2 drms value varies between approximately 95.5 percent and 98.2 percent, depending on the degree of ellipticity of the error distribution. Circular Error Probable (CEP) is another common measure of horizontal positioning error. CEP is defined to be CEP = 0.589 (ÏN + ÏE). The probability of the actual horizontal position lying inside (or outside) a circle with radius CEP is 50 percent. If it is assumed that positioning errors have a circular normal distribution, then the values of CEP and 2 drms are related as follows: 2 drms = 2.4 CEP. Similarly the Spherical Error Probable (SEP) is defined to be SEP = 0.513 (ÏN + ÏE + Ïh). The probability of the actual position in space lying inside (or outside) a sphere of radius SEP is 50 percent (Ïh is the square root of the variance in the height). There are other expressions that are commonly used to quantify the uncertainty associated with determination of position. Three such quantities are PDOP, VDOP, and 1 Ronald Braff and Curtis Shively, "GPS Integrity Channel," in vol. III of Global Positioning System - Papers Published in Navigation (Washington, D.C.: The Institute of Navigation, 1986), pp. 258-274.

APPENDIX D 178 HDOP (Position, Vertical, and Horizontal Dilution of Precision, respectively). Mathematically where Ïr2 is the variance of a single (pseudorange) observation. Here the level of significance associated with the recovery of position is tied to the uncertainty of the measurements used. This is a function of geometry between the receiver and the tracked satellites. 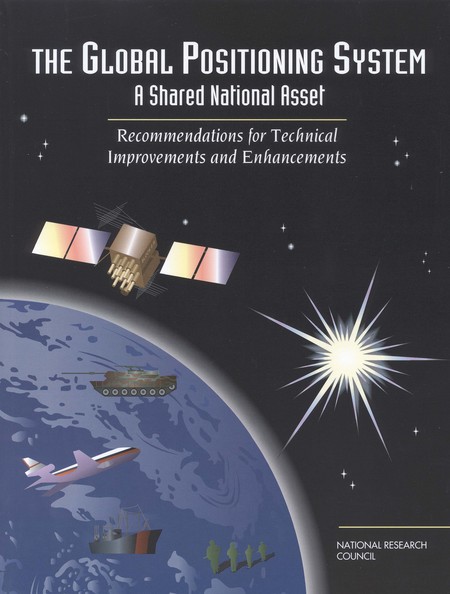 The Global Positioning System (GPS) is a satellite-based navigation system that was originally designed for the U.S. military. However, the number of civilian GPS users now exceeds the military users, and many commercial markets have emerged. This book identifies technical improvements that would enhance military, civilian, and commercial use of the GPS. Several technical improvements are recommended that could be made to enhance the overall system performance.