Reshaping the Graduate Education of Scientists and Engineers (1995)

Visit NAP.edu/10766 to get more information about this book, to buy it in print, or to download it as a free PDF.
Page i Share Cite
Suggested Citation:"Front Matter." Institute of Medicine, National Academy of Sciences, and National Academy of Engineering. 1995. Reshaping the Graduate Education of Scientists and Engineers. Washington, DC: The National Academies Press. doi: 10.17226/4935.
×

ii NATIONAL ACADEMY PRESS 2101 Constitution Ave., N.W. Washington, D.C. 20418 NOTICE: This volume was produced as part of a project approved by the Governing Board of the National Research Council, whose mem- bers are drawn from the councils of the National Academy of Sciences, the National Academy of Engineering, and the Institute of Medicine. It is a result of work done by the Committee on Science, Engineering, and Public Policy (COSEPUP) as augmented, which has authorized its release to the public. This report has been reviewed by a group other than the authors according to procedures approved by COSEPUP and the Report Review Committee. The National Academy of Sciences (NAS) is a private, nonprofit, self-perpetuating society of distinguished scholars engaged in scien- tific and engineering research, dedicated to the furtherance of science and technology and to their use for the general welfare. Under the authority of the charter granted to it by Congress in 1863, the Academy has a working mandate that calls on it to advise the federal govern- ment on scientific and technical matters. Dr. Bruce M.Alberts is president of the NAS. The National Academy of Engineering (NAE) was established in 1964, under the charter of the NAS, as a parallel organization of dis- tinguished engineers. It is autonomous in its administration and in the selection of members, sharing with the NAS its responsibilities for advising the federal government. The National Academy of Engineering also sponsors engineering programs aimed at meeting national needs, encourages education and research, and recognizes the superior achievements of engineers. Dr. Robert M.White is president of the NAE. The Institute of Medicine (IOM) was established in 1970 by the NAS to secure the services of eminent members of appropriate profes- sions in the examination of policy matters pertaining to the health of the public. The Institute acts under the responsibility given to the NAS in its congressional charter to be an adviser to the federal government and, on its own initiative, to identify issues of medical care, research, and education. Dr. Kenneth I. Shine is president of the IOM. The Committee on Science, Engineering, and Public Policy (COSEPUP) is a joint committee of the NAS, the NAE, and the IOM. It includes members of the councils of all three bodies. This project was supported by the National Science Foundation, the U.S. Department of Energy, and the Kellogg Endowment Fund of the National Academy of Sciences and the Institute of Medicine. Library of Congress Catalog Card Number: 95â69122 International Standard Book Number: 0-309-05285-8 Internet Access: This report is available on the National Academy of Sciences' Internet host. It may be accessed via World Wide Web at http://www.nas.edu, via Gopher at gopher.nas.edu, or via FTP at ftp.nas.edu. On the Cover: The cover depicts decision trees illustrating the variety of paths scientists and engineers decide to pursue throughout their career. Available from: National Academy Press, 2101 Constitution Avenue, N.W., Box 285, Washington, D.C. 20055 1â800â624â6242 or 202â 334â3313 (in Washington metropolitan area) Copyright 1995 by the National Academy of Sciences. All rights reserved. This document may be reproduced solely for educational purposes without the written permission of the National Academy of Sciences. Printed in the United States of America First Printing, May 1995 Second Printing, November 1995

PREFACE v PREFACE In 1993, the Committee on Science, Engineering, and Public Policy (COSEPUP) issued a report entitled Science, Technology, and the Federal Government: National Goals for a New Era (the Goals report), which proposed a framework for federal policy to support science and technology. During the preparation of the report, it became apparent that a complete discussion of the science and technology enterprise would require an examination of the process by which scientists and engineers are educated. If scientists and engineers are to contribute effectively to national, scientific, and technological objectives, their educational experience must prepare them to do so. The present report can be considered a companion volume to the Goals report. Several key questions guided the committee during its initial deliberations: â¢ What are typical career paths for scientists and engineers, and how have they changed in recent years? â¢ Given present career paths, what are the most appropriate structures and functions for graduate education? â¢ How can science and engineering graduate students be prepared for a variety of careers in teaching, industry, government, and other employment sectors, in addition to research? â¢ Are we producing the right numbers of PhDs?1 â¢ What should be the nation's goals for graduate science and engineering education? 1 Because of the concerns regarding PhD unemployment, the report focuses on the PhD.

PREFACE vi In attempting to answer those questions, we found important gaps in our knowledge of employment rates and patterns. It has proved difficult, for example, to determine where PhDs are and what they are doing in nonacademic positions or to determine accurately either unemployment rates of scientists and engineers or the extent of underemployment, especially among recent graduates, because of the lack of timely data. In fact, we were sufficiently troubled by the lack of generally available information to conclude that students', professors', and mentors' lack of accurate, timely, and accessible data on employment trends, careers, and sources of student support is a serious flaw in our education system. This deficiency makes it difficult for potential and current graduate students to make well-informed decisions as to whether and where to enter graduate school. It also hampers the faculties at our universities in preparing their students adequately for the full range of professional careers in science and engineering. Therefore, the committee faced a dilemmaâwhether to make recommendations despite gaps in current understanding or to counsel delay until such understanding is attained. It proceeded to make recommendations now because students, universities and colleges, professors, mentors, funding agencies, employers, and others must make decisions today that will affect the careers of science and engineering students for the rest of their lives. The recommendations in this report reflect a common theme. Many of the job opportunities of the future will favor students with greater breadth of academic and career skills, so the universities and their partners in the graduate-education enterprise should therefore cooperate to broaden curricular options for graduate students. We hope this report will be useful not only for university presidents, provosts, deans, and others in the decision-making structure of universities, but also for all institutions and individuals who are part of the graduate- education enterprise: federal and state government,2 industry and business, and faculty, mentors, and students at both the graduate and undergraduate levels. The committee acknowledges the invaluable information and opinions received from a variety of sources. We convened more than a half-dozen panels of experts from academe, government, industry, foundations, and other sectors. The panel members are listed in Appendix E. A call for comments to scientists, engineers, administrators, students, and educators across the country drew more than 100 thoughtful replies, many of them reflecting exceptional care; some correspondents even conducted informal surveys within their own institutions. Those responding to the call for comments are listed in Appendix D and their thoughtful responses are provided in Appendix F. In addition, Appendix G summarizes a survey we sent to graduate students asking what information they need to make decisions. The committee also made use of continuing work by the National Research Council's Office of Scientific and Engineering Personnel. 2 There is a lack of adequate information about educational and funding activities at the state level. The states have supported graduate education for many years, and a number of state governments and agencies have initiated innovative ways to broaden graduate education through interactions with industry, government, and community groups.

PREFACE vii The production of the report was the result of hard work by the committee as a whole and by the extra effort of the Guidance Group (consisting of Arden Bement, Mary J.Osborn, David Challoner, Alexander Flax, and me), which convened between regular committee meetings. The project was aided by the invaluable help of COSEPUP professional staff: Michael McGeary, study director, who provided research and analytical support, as illustrated in Appendixes B and C and Chapter 2, and drafted major portions of Chapters 3 and 4; Deborah Stine, senior program officer, who managed the committee's outreach efforts and contributed in a major way to Chapter 2; Alan Anderson, consultant/writer, who helped draft and revise the text throughout the project; and Lawrence McCray, executive director of COSEPUP, who oversaw the committee's activity. Wise guidance was provided by Philip M. Smith as a consultant. National Research Council staff members Dimitria Satterwhite, Jeffrey Peck, and Patrick Sevcik ably assisted the project. The committee also thanks its diligent editor, Norman Grossblatt. PHILLIP A.GRIFFITHS Chair Committee on Science, Engineering, and Public Policy

CONTENTS x 3 THE EDUCATION OF GRADUATE SCIENTISTS AND ENGINEERS 47 3.1 OVERVIEW 47 3.2 THE MASTER'S EXPERIENCE 49 3.3 THE DOCTORAL EXPERIENCE 49 3.4 TIME TO DEGREE 51 3.5 MECHANISMS OF ASSISTANCE FOR GRADUATE EDUCATION 53 3.6 CAREER INFORMATION AND GUIDANCE 59 3.7 THE GRADUATE EDUCATION OF WOMEN AND MINORITY-GROUP STUDENTS 60 3.8 FOREIGN GRADUATE STUDENTS 62 3.9 POSTDOCTORAL EDUCATION 62 4 DISCUSSION OF MAJOR RELATED ISSUES 65 4.1 THE âRIGHTâ NUMBER OF SCIENCE AND ENGINEERING PHDS 65 The Current Unemployment Situation 66 Limitations of Supply-Demand Models for Forecasting Science and Engineering Personnel 67 Needs Conclusion 68 4.2 THE ISSUE OF FOREIGN STUDENTS 69 Support of Foreign Graduate Students 69 Where do Foreign-Citizen PhDs Go? 69 What Are the Effects? 70 Conclusion 71 4.3 TIME TO EMPLOYMENT 72 4.4 INFORMATION AND ANALYSIS NEEDS 73 5 CONCLUSIONS AND RECOMMENDATIONS 75 5.1 NATIONAL OPTIONS 76 5.2 TOWARD GREATER VERSATILITY 77 5.3 TOWARD BETTER CAREER INFORMATION AND GUIDANCE 84 5.4 TOWARD IMPLEMENTATION OF A NATIONAL POLICY 89 5.5 CONCLUSION 91

CONTENTS xi APPENDIXES A BIOGRAPHICAL INFORMATION ON COMMITTEE MEMBERS 93 B STATISTICS ON GRADUATE EDUCATION OF SCIENTISTS AND ENGINEERS 97 C EMPLOYMENT TRENDS AMONG SCIENTISTS AND ENGINEERS WITH GRADUATE 139 DEGREES D RESPONDENTS TO CALL FOR COMMENTS 173 E PANELISTS 179 F CALL FOR COMMENTS: SUMMARY OF RESPONSES 183 G SUMMARY OF RESPONSES TO SURVEY ON INFORMATION NEEDS 197 REFERENCES 203

Next: EXECUTIVE SUMMARY »
Reshaping the Graduate Education of Scientists and Engineers Get This Book
× 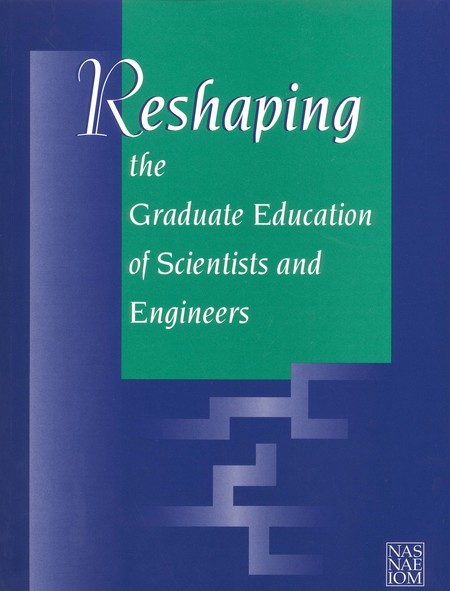 Are we producing too many PhDs? Does the current graduate education system adequately prepare science and engineering students for today's marketplace? How do foreign students enter the picture? What should be the PhD of the future? These and other questions are addressed in this book by a blue-ribbon panel of scientists and engineers. Recommendations are aimed at creating a new PhD that would retain the existing strengths of the current system while substantially increasing the information available, the potential versatility of students, and the career options afforded to them by their PhD education.