Upstream: Salmon and Society in the Pacific Northwest (1996)

Visit NAP.edu/10766 to get more information about this book, to buy it in print, or to download it as a free PDF.
Page i Share Cite
Suggested Citation:"Front Matter." National Research Council. 1996. Upstream: Salmon and Society in the Pacific Northwest. Washington, DC: The National Academies Press. doi: 10.17226/4976.
×

UPSTREAM i Salmon and Society in the Pacific Northwest Committee on Protection and Management of Pacific Northwest Anadromous Salmonids Board on Environmental Studies and Toxicology Commission on Life Sciences NATIONAL ACADEMY PRESS Washington, D.C. 1996

NATIONAL ACADEMY PRESS · 2101 Constitution Ave., N.W. · Washington, D.C. 20418 NOTICE: The project that is the subject of this report was approved by the Governing Board of the National Research Council, whose members are drawn from the councils of the National Academy of Sciences, the National Academy <>f Engineering, and the Institute of Medicine. The members of the committee responsible for the report were chosen for their special competences and with regard for appropriate balance. This report has been reviewed by a group other than the authors according to procedures approved by a Report Review Committee consisting, of members of the National Academy of Sci- ences, the National Academy of Engineering, and the Institute of Medicine. The project was supported by Department of Commerce, National Oceanic anti Atmospheric Administration under grant #NA26FH0208. Library of Congress Cataloging-in-Publication Data Upstream: salmon and society in the Pacific Northwest / Committee on Protection and Management of Pacific Northwest Anadromous Salmonids, Board on Environmental Studies and Toxicology, Commission on Life Sciences. p. cm. Includes bibliographical references (p. ) and index. ISBN 0-309-05325-0 1. Pacific salmon Northwest, Pacific. 2. Fishery conservation- Social aspects Northwest, Pacific. 3. Pacific salmon fisheries- Pacific Northwest Management. 4. Pacific salmon Effect of habitat modification on Northwest, Pacific. I. National Research Council (U.S.). Committee on Protection and Management of Pacific Northwest Anadromous Salmonids. QL638.S2U67 1996 597'.55 dc20 95-51662 CIP Copyright 1996 by the National Academy of Sciences. All rights reserved. Cover art: Midnight Run by Ray Troll, Ketchikan~ Alaska Printed in the United States of America

OTHER RECENT REPORTS OF THE BOARD ON ENVIRONMENTAL STUDIES AND TOXICOLOGY Carcinogens and Anticarcinogens in the Human Diet: A Comparison of Naturally Occurring and Synthetic Substances (1996) Science and the Endangered Species Act (1995) Wetlands: Characteristics and Boundaries (1995) Biologic Markers in Urinary Toxicology (1995) Review of EPA's Environmental Monitoring and Assessment Program (three reports, 1994- 1995) Science and Judgment in Risk Assessment (1994) Ranking Hazardous Sites for Remedial Action (1994) Pesticides in the Diets of Infants and Children (1993) Issues in Risk Assessment (1993) Setting Priorities for Land Conservation (1993) Protecting Visibility in National Parks and Wilderness Areas (1993) Biologic Markers in Immunotoxicology (1992) Dolphins and the Tuna Industry (1992) Environmental Neurotoxicology ~ 1992) Hazardous Materials on the Public Lands (1992) Science and the National Parks (1992) Animals as Sentinels of Environmental Health Hazards (1991) Assessment of the U.S. Outer Continental Shelf Environmental Studies Program,Volumes I-IV ~ 1991 - 1993) Human Exposure Assessment for Airborne Pollutants (1991) Monitoring Human Tissues for Toxic Substances ~ 1991 ~ Rethinking the Ozone Problem in Urban and Regional Air Pollution (1991) Decline of the Sea Turtles (1990) Tracking Toxic Substances at Industrial Facilities (1990) Biologic Markers in Pulmonary Toxicology (1989) Biologic Markers in Reproductive Toxicology (1989) Copies of these reports may be ordered from the National Academy Press (8009 624-6242 (202) 334-3313 Vl

Preface The Committee on Protection and Management of Pacific Northwest Anadromous Salmon was formed in 1992 under the auspices of the National Research Council's Board on Environmental Studies and Toxicology (BEST). The committee was formally charged as follows: The committee will review information concerning the seven species of the genus Oncorhynchus in the Pacific Northwest. The review will focus on the population status, habitat, and environmental requirements of the stocks. It will include analysis of information about their genetics, history, management, and production by hatcheries, as well as federal, state, tribal, and other management regimes. The committee will evalu- ate options for improving the prospects for long-term sustainability of the stocks, and will consider economic and social implications of such changes. The committee will undertake the following general tasks: Assess the state of the stocks. This assessment will include a consid- eration of the nature of local adaptations of stocks to environmental conditions. More specific questions will probably include the degree to which the adaptations are due to phenotypic plasticity versus genetic differences, the nature and appropriate definition of a stock, the value of a diversity of stocks for preserving evolutionary potential, and which stocks are in danger of extinction or of becoming irretrievably mixed with other stocks. Analyze the causes of decline. This analysis will consider all stages of . . V11

. . . V111 PREFACE the life history of the seven species: spawning and nursery habitat, downstream migration, life at sea, and the return upriver to spawn. Analyze options for intervention (management). Again, this will in volve all stages of the life history. It will include a consideration of previous activities, such as the Pacific Northwest Power Planning Council's program in adaptive management; federal, state, and local regulations and enhancements; and other activities. The analysis will include some consideration of socioeconomic costs and benefits. Composition of this "salmon" committee was especially broad; it had to be to encompass the geographic, scientific, and human breadth of the issues in the continuing interactions in the Pacific Northwest between salmon and humans. Members included experts with general and specific knowledge of genetics, fish ecology, stream ecology, fish biology, inland waters and ocean science, anthro- pology, social science, political science, international fisheries and transboundary issues, habitat and habitat rehabilitation, hydrology, hatcheries, dams, fishery management, and fishery science. The committee's biographies are in Appendix A. I especially appreciated the degree to which the committee was able to frame and synthesize the many facets of the "salmon problem." I continue to be amazed by the high quality of the National Research Council staff; on behalf of the committee I especially thank David Policansky, Tania Williams, and Adrienne Davis. The committee met seven times from December 1992 to June 1994; two meetings were held in Portland, Oregon, and two in Seattle, Washington, to allow persons from the Pacific Northwest with information relevant to the issues easy access to the committee. In addition, a writing subgroup met and individual committee members met in pairs and trios on specific issues. The dates and meeting locations are in Appendix B. The committee thanks the many persons who provided information and points of view to us in open sessions and public hearings. These people further broadened the scope of the committee, and the specific information we received greatly helped develop our own perspectives on the issues. These individuals and organizations are identified in Appendix C. Also, I thank Courtland L. Smith for his many contributions during the period he served on the committee, both to the process of the committee and the text of our report. The "salmon problem" in the Pacific Northwest is one that can be dealt with only if the diverse participants work together on the many issues that unfold over the long meandering path laid out by the salmon over their lives from clear cold streams where they hatch, to the ocean where they grow, and back again to their natal streams to spawn. Owing to the wide distribution of Pacific anadromous salmon, the region over which the salmon-human interactions play out cuts across

PREFACE IX local, state, and international boundaries; across the responsibilities of many human institutions designed to deal with parts of the problem; and across the lands and waters used in many different human endeavors. The interactions with human activity cannot be solved by the action of single groups or by focusing on single issues and single causes. In a sense, Upstream: Salmon and Society in the Pacific Northwest challenges society to deal with this large issue involving environmental, resource, and human considerations at the time and space scales necessary to prevent further declines or perhaps even rehabilitate the human- salmon system. John J. Magnuson Chair

i PSTREAH Salmon and Society in the Pacific Northwest ~ \~ ,~ ,~ Yew

Next: Executive Summary »
Upstream: Salmon and Society in the Pacific Northwest Get This Book
× 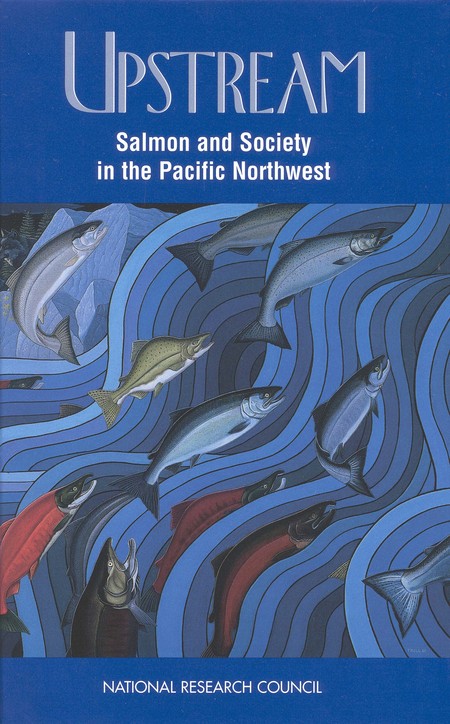 The importance of salmon to the Pacific Northwest—economic, recreational, symbolic—is enormous. Generations ago, salmon were abundant from central California through Idaho, Oregon, and Washington to British Columbia and Alaska. Now they have disappeared from about 40 percent of their historical range. The decline in salmon numbers has been lamented for at least 100 years, but the issue has become more widespread and acute recently.

The Endangered Species Act has been invoked, federal laws have been passed, and lawsuits have been filed. More than $1 billion has been spent to improve salmon runs—and still the populations decline.

In this new volume a committee with diverse expertise explores the complications and conflicts surrounding the salmon problem—starting with available data on the status of salmon populations and an illustrative case study from Washington state's Willapa Bay.

The book offers specific recommendations for salmon rehabilitation that take into account the key role played by genetic variability in salmon survival and the urgent need for habitat protection and management of fishing.

The committee presents a comprehensive discussion of the salmon problem, with a wealth of informative graphs and charts and the right amount of historical perspective to clarify today's issues, including:

This book offers something for everyone with an interest in the salmon issue—policymakers and regulators in the United States and Canada; environmental scientists; environmental advocates; natural resource managers; commercial, tribal, and recreational fishers; and concerned residents of the Pacific Northwest.