HIV and the Blood Supply: An Analysis of Crisis Decisionmaking (1995)

Get This Book
Visit NAP.edu/10766 to get more information about this book, to buy it in print, or to download it as a free PDF.
« Previous: 8 Conclusions and Recommendations
Page 237 Share Cite
Suggested Citation:"Appendixes." Institute of Medicine. 1995. HIV and the Blood Supply: An Analysis of Crisis Decisionmaking. Washington, DC: The National Academies Press. doi: 10.17226/4989.
×

Next: A Individuals Interviewed by the Committee »
HIV and the Blood Supply: An Analysis of Crisis Decisionmaking Get This Book
× 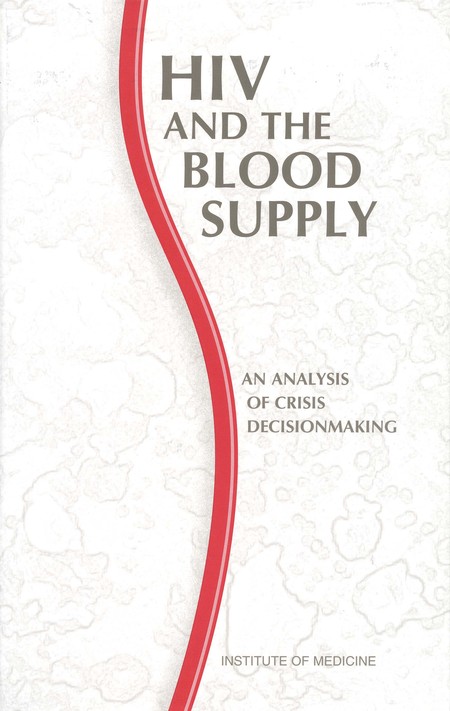 During the early years of the AIDS epidemic, thousands of Americans became infected with HIV through the nation's blood supply. Because little reliable information existed at the time AIDS first began showing up in hemophiliacs and in others who had received transfusions, experts disagreed about whether blood and blood products could transmit the disease.

During this period of great uncertainty, decision-making regarding the blood supply became increasingly difficult and fraught with risk. This volume provides a balanced inquiry into the blood safety controversy, which involves private sexual practices, personal tragedy for the victims of HIV/AIDS, and public confidence in America's blood services system.

The book focuses on critical decisions as information about the danger to the blood supply emerged. The committee draws conclusions about what was done—and recommends what should be done to produce better outcomes in the face of future threats to blood safety.

The committee frames its analysis around four critical area: