Get This Book
Visit NAP.edu/10766 to get more information about this book, to buy it in print, or to download it as a free PDF.
« Previous: Acronyms
Page 103 Share Cite
Suggested Citation:"A Biographies of Committee Members." National Research Council. 1996. Shipbuilding Technology and Education. Washington, DC: The National Academies Press. doi: 10.17226/5064.
×

Appendix A— Biographies of Committee Members

John M. Stewart is a director of McKinsey & Company. Mr. Stewart has specialized in solving problems for international technical companies in merger and acquisition, project management, management information systems, and research and development. He has served on many boards and commissions, including the Joint Council on Economic Education, the New York State Commission on Management and Productivity, and the U.S. National Commission on Productivity and was vice chairman of the Manufacturing Studies Board Committee for the Study of Defense Manufacturing Strategy. Mr. Stewart received a B.S. degree from Yale University and an M.B.A. from Harvard Business School.

Gerald J. Blasko is a construction superintendent at Newport News Shipbuilding. He was previously program manager for advanced technology and supervisor of manufacturing engineering. His previous employment includes Dravo Corporation, where he held a variety of positions in production planning and production engineering. Mr. Blasko received a degree of B.S. in industrial management from the University of Akron.

Edward J. Campbell, NAE, retired as president of J.I. Case Co. Prior to that, he was president of Newport News Shipbuilding for 13 years. He is a past president of the Society of Naval Architects and Marine Engineers from which he also received the Admiral Land Award. He also served two terms as chairman of the Shipbuilders Council of America and is now a trustee of the College of William and Mary and Webb Institute of Naval Architecture. He is also a board director of Global Marine Inc., Zurn Industries, and the American Bureau of Shipping Group.

Mr. Campbell received a B.S. degree in mechanical engineering and an M.B.A. from Northwestern University.

Joseph J. Cuneo is a principal with MARINEX International, Inc., and with New York Bulk Carriers, Inc. He has served as chairman of the board and CEO of J.J. Henry Co., was co-founder, president and chief operating officer of Energy Transportation Corp., and president and chief operating officer of John J. McMullen Associates, Inc. He is a member of several professional and classification societies, including the Society of Naval Architects and Marine Engineers, where he is chairman of the Investments Committee; a member of the Executive Committee and the Finance Committee, the American Bureau of Shipping; and a member of the Board of Trustees of Webb Institute of Naval Architecture. Mr. Cuneo received a B.S. degree from Webb and an M.B.A. from Harvard Business School.

Arthur J. Haskell retired as senior vice president of Matson Navigation Company. Previous employment includes Western Gear Corporation, National Bulk Carriers, and commissioned service in the United States Navy. He is chairman of the Pacific Coast Committee of the National Cargo Bureau and has served as president of the Society of Naval Architects and Marine Engineers and as director of the San Francisco Bay Area Marine Exchange. Mr. Haskell is a graduate of the U.S. Naval Academy and received the graduate degree of Naval Engineer from the Massachusetts Institute of Technology.

Harold C. Heinze is a senior management advisor to Alaska Petroleum Contractors. He has served as resource development advisor to the governor of Alaska and as commissioner of natural resources for the state of Alaska. He was also president of ARCO Transportation company and president of ARCO Alaska, Inc. Mr. Heinze received a B.S. degree from Colorado School of Mines.

George H. Kuper is the president and CEO of the Council of Great Lakes Industries. He was previously CEO of the Industrial Technology Institute. Past positions include executive director of the National Center for Productivity and Quality of Working Life, executive vice president of the Boston Venture Management Co., deputy director of the Mayor's Office of Justice Administration in the City of Boston, and executive director of the Manufacturing Studies Board. He has been an advisor to the Center for Strategic and International Studies and the Council for Economic Development, chairman of the National Association of Manufacturers' Committee on Productivity, a founder and vice president of the American Productivity Management Association, and a member of the U.S. Chamber of Commerce Council on Trends and Perspective. Mr. Kuper received a B.S. degree from Johns Hopkins University, an M.B.A. from Harvard Business School, and a graduate degree from the London School of Economics.

Henry S. Marcus is professor of marine systems and is the NAVSEA Professor of Ship Acquisition in the Ocean Engineering Department and chairman, Ocean Systems Management Program, at the Massachusetts Institute of Technology. He was a visiting professor at the School of Travel Industry Management of the University of Hawaii at Manoa. He also serves as a transportation consultant to maritime industries and government. His research interests include ocean system logistics and marine environmental protection. Dr. Marcus is a former member of the Marine Board. He was a member of the National Research Council's Maritime Transportation Research Board during the late 1970s. More recently, he has served as a member of the Marine Board's Committee on Productivity of Marine Terminals and the Committee on Control and Recovery of Hydrocarbon Vapors from Ships and Barges, and he served as chairman of the recent assessment of tank vessel design alternatives. Dr. Marcus holds a B.S. degree in naval architecture from Webb Institute, two M.S. degrees from Massachusetts Institute of Technology (one in naval architecture and the other in shipping and shipbuilding management), and a D.B.A. degree from Harvard University.

T. Francis Ogilvie is a professor at and formerly head of the Department of Ocean Engineering of the Massachusetts Institute of Technology. Previous employment includes the University of Michigan, where he was chairman of the Department of Naval Architecture and Marine Engineering, and the David Taylor Model Basin, where he was head of the Seaworthiness and Fluid Dynamics Division. He is a member of numerous professional societies, including the Society of Naval Architects and Marine Engineers, of which he is a fellow and recipient of the William H. Webb Medal, and the Society of Naval Architects of Japan. His service to organizations include the U.S. Coast Guard Academy Advisory Committee, and several committees of the National Academy of Sciences. Dr. Ogilvie received a B.A. from Cornell University, an M.S. from the University of Maryland, and a Ph.D. from the University of California at Berkeley.

Irene C. Peden, NAE, is a retired professor of electrical engineering at the University of Washington, Seattle, where she has also served terms as associate dean of the College of Engineering and as associate chair of the Department of Electrical Engineering. She recently completed service as director of the Division of Electrical and Communications Systems at the National Science Foundation. She is a member of several professional societies, including the Institute of Electrical and Electronics Engineers (IEEE) for which she is a fellow, and has served as vice president for educational activities, member of the Board of Directors and Executive Committee, Fellows Committee, Awards Board, and Editorial Board of the Proceedings of the IEEE. She is a member of the Engineering Development Council of the University of Colorado at Denver, the Electrical and Computer Engineering Department Advisory Board of the University of California at Santa Barbara, the Board of Visitors of the School of Engineering

at Duke University, and the National Advisory Board of the GATEWAY Engineering Education Coalition. Dr. Peden served on the Engineering Societies' accreditation board for maritime colleges. She has received numerous awards, including the National Science Foundation's 1993 Engineer of the Year, the American Society for Engineering Education Hall of Fame, the Linton E. Grintner Award of the Accreditation Board for Engineering and Technology, and the Haraden Pratt Award of the IEEE. She is a former Chair of the Army Science Board. Dr. Peden received an M.S. from the University of Colorado at Boulder and a Ph.D from Stanford University.

Richard W. Thorpe is a principal consultant with Kværner Masa Marine, Inc. Previous employment includes the Shipbuilders Council of America, where he was vice president of export activities and technical research; John J. McMullen Associates, where he was executive vice president; Bath Iron Works, where he was contract administrator for all Navy programs; and Bethlehem Steel Corporation, where he was leader of the Nuclear Engineering Group. He is a lifetime member of the American Society of Naval Engineers and a member of the Society of Naval Architects and Marine Engineers, for which he is a member of the Technical and Research Steering, Production, Sealift, and Public Service Advisory committees. Mr. Thorpe received a B.S. from Webb Institute of Naval Architecture, a Nuclear Engineering Certificate from Oak Ridge School of Reactor Technology, and an M.B.A. from Harvard Business School.

John S. Tucker is retired vice president of engineering of National Steel and Shipbuilding Company. He is a member of the Society of Naval Architects and Marine Engineers, the Navy League, and the American Bureau of Shipping Technical Committee. Mr. Tucker earned a Higher National Certificate in Naval Architecture from Paisley Technical College.

Richard H. White is a research staff member at the Institute for Defense Analysis. He was formerly an economist with the Maritime Administration, and the chief economist of the Congress of the Federated States of Micronesia. He is a member of the American Economic Association and formerly a lecturer in microeconomics at Montgomery College. Dr. White received a B.A. degree from the Johns Hopkins University and an M.A. and a Ph.D. from the American University.

Next: B Presentations to the Committee »
Shipbuilding Technology and Education Get This Book
× 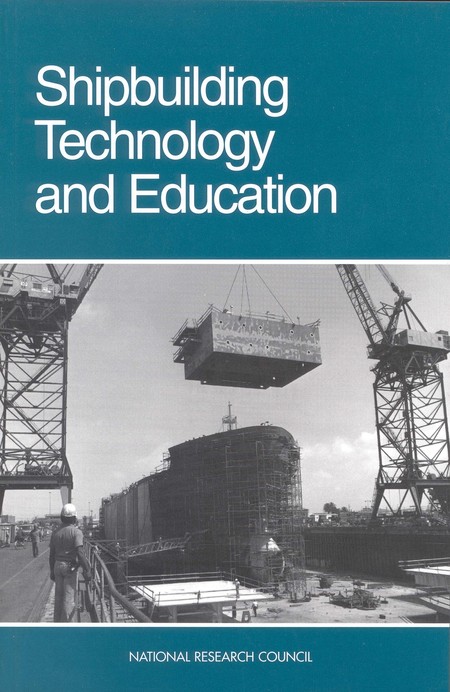 The U.S. shipbuilding industry now confronts grave challenges in providing essential support of national objectives. With recent emphasis on renewal of the U.S. naval fleet, followed by the defense builddown, U.S. shipbuilders have fallen far behind in commercial ship construction, and face powerful new competition from abroad. This book examines ways to reestablish the U.S. industry, to provide a technology base and R&D infrastructure sustaining both commercial and military goals.

Comparing U.S. and foreign shipbuilders in four technological areas, the authors find that U.S. builders lag most severely in business process technologies, and in technologies of new products and materials. New advances in system technologies, such as simulation, are also needed, as are continuing developments in shipyard production technologies. The report identifies roles that various government agencies, academia, and, especially, industry itself must play for the U.S. shipbuilding industry to attempt a turnaround.