Get This Book
Visit NAP.edu/10766 to get more information about this book, to buy it in print, or to download it as a free PDF.
« Previous: L - Other Looming Issues Related to Cryptography Policy
Page 485 Share Cite
Suggested Citation:"M - Federal Information Processing Standards." National Research Council. 1996. Cryptography's Role in Securing the Information Society. Washington, DC: The National Academies Press. doi: 10.17226/5131.
×

Agencies at all levels of government set regulatory standards for products and processes in order to protect health, safety, and the environment. They also produce specifications for public procurement of goods and services. The Federal Register regularly publishes requests for comments on standards proposed by federal agencies. Some of these are developed by agencies, while others originate as voluntary standards set in the private sector and are adopted by reference within the text of regulations and specifications.

2 Many standards related to information used in private industry are developed through voluntary consensus processes. Among the most active information technology standards developers are the Institute of Electrical and Electronics Engineers (IEEE), a professional society; the Information Technology Industry Coalition (ITIC), which administers information processing standards development in Committee X3; and the Alliance for Telecommu-

consensus standards development procedures promulgated by the American National Standards Institute (ANSI). These include open participation of volunteer technical experts in standards-writing committees; consensus among committee members in support of any proposed standard; and elements of administrative due process, such as opportunities for comment and voting by affected parties. These procedures increase the likelihood of achieving a broad-based consensus and enhancing the acceptance of the resulting standard.3

NIST personnel are frequent participants in consensus standards committees, and FIPSs generally cite or draw on consensus and de facto industry standards.4 This practice is consistent with government-wide policy; Office of Management and Budget Circular A-119 requires that all federal agencies cite existing consensus standards in regulation and procurement wherever possible, rather than develop government-unique

nications Industry Solutions (ATIS), coordinator of Committee T1 for telecommunication standards. The American Banking Association sponsors Committee X9, which is currently developing a cryptographic standard for interbank transactions based on the triple-DES algorithm. The Internet Engineering Task Force determines the protocols that are used (in varying degrees of compliance) to communicate between Internet sites.

Other private sector standards result from competition in the commercial marketplace. When one firm's product becomes so widespread that its specifications guide the decisions of other market participants, those specifications become a de facto industry standard. Firms may promote their technologies as de facto standards in pursuit of goals such as gaining economies of scale, protecting or increasing market share, and obtaining revenues from licensing intellectual property, among others. The IBM-compatible personal computer architecture is an example of a de facto industry standard. See Michael Hergert, "Technical Standards and Competition in the Microcomputer Industry," in H. Landis Gabel (ed.), Product Standardization and Competitive Strategy, Elsevier Science Publishers B.V., Amsterdam, 1987.

In recent years, some firms in the information technology industry have tried to establish de facto standards by promoting them through industry consortia. The Open Software Foundation's efforts to set a de facto UNIX operating system standard are an example. See Carl Cargill and Martin Weiss, "Consortia in the Standards Development Process," Journal of the American Society for Information Science, Volume 43(8), 1992, pp. 559-565.

The decentralized nature of standard setting in the United States can be confusing and inefficient in specific circumstances. A recent National Research Council study of standards and international trade in many industry sectors concluded, however, that the existence of multiple standard-setting processes generally serves the national interest well, for reasons that include flexibility in responding to changing technological and market forces and competitive pressures placed on rival standards developers. See National Research Council, Standards, Conformity Assessment, and Trade, National Academy Press, Washington, D.C., 1995, pp. 60-61.

standards.5 NIST's participation also reflects its recognition of the fact that the standards it sets will be more likely to succeed—in terms of reducing procurement costs, raising quality, and influencing the direction of information technology market development—if they are supported by private producers and users.6

There is an additional benefit to government reliance on industry standards that is especially relevant to information technology. Recent economic analysis and ample experience demonstrate that standards governing the interoperability of information technology products pose special challenges. Such standards control the ability of separate users, devices, software, and services to work with each other. Examples include computer operating systems and cryptographic algorithms used for communication or data exchange.

Reliance on de facto industry standards may involve problems as well. For example, the establishment of a formal standard based on de facto informal industry standards may freeze technology prematurely. User commitments to the use of that standard and a hard-to-change infrastructure can then restrict the development and deployment of new and more useful technologies. Moreover, a standard that is popular in the marketplace may not necessarily be the most appropriate for all end-user applications.

One vexing problem with industry standards relates to the competitive nature of the marketplace. The setting of a formal standard that has the effect of favoring any individual company or set of companies could be viewed as unfair and anticompetitive if it has the effect of suppressing other, equally useful technologies. Further problems arise if the payment of royalties is necessary to use a particular formal standard, and many standards-setting bodies do not adopt patented technology unless the patent holders agree to certain terms with regard to licensing those who wish to implement the standards.

The issuance of a FIPS can have enormous significance to the private sector as well, despite the face that the existence of a FIPS does not legally compel a private party to adopt it. One reason has already been stated-

5 Office of Management and Budget, Circular No. A-119, Revised, Federal Register, October 26, 1993, p. 57644. The Department of Defense, among others, has experienced dramatic reductions in procurement costs by taking advantage of the economies of scale inherent in large-volume commercial production relative to production solely for the government market. Purchasing commercial products also reduces significant cost burdens on suppliers of meeting separate commercial and military-unique standards. For further discussion of government use of private standards, see National Research Council, Standards, Conformity Assessment, and Trade, 1995, pp. 54-57.

to the extent that a FIPS is based on existing private sector standards, it codifies standards of existing practice with all of the benefits (and costs) described above. A second reason is that a FIPS is often taken as a government endorsement of the procedures, practices, and algorithms contained therein and thus sets a de facto ''best-practices" standard for the private sector. A third reason is related to procurements that are FIPS-compliant as discussed in Chapter 6.

Products such as computers and communication devices that are intended to interoperate with other equipment are of little value if they are based on a standard few others use—there is no one to communicate with. For this reason, interoperability standards often foster a sudden acceleration in market share growth—a bandwagon effect—in which users afraid of being left out rush to adopt a standard once it appears clear that most other users will adopt that standard. The flip side of this phenomenon is the potential for significant delay in development of a market prior to this takeoff point: users put off purchasing products and services that might become "orphaned" in the future. During a period in which more than one competing standard exists, the entire market's growth may be adversely affected. The failure of a consumer market for AM stereo receivers, for example, was largely due to the lack of a dominant standard.7

Competing standards developed in the private and public sectors could be slowing the spread of cryptographic products and services. The two cryptography-related FIPSs most recently produced by NIST were not consistent with existing de facto industry standards. As discussed previously, the Escrowed Encryption Standard was adopted as FIPS 185 despite the overwhelmingly negative response from private industry and users to the public notice in the Federal Register.8 The Digital Signature Standard was also adopted despite both negative public comments and the apparent emergence of a de facto industry based on RSA's public-key algorithm.9

Next: N - Laws, Regulations, and Documents Relevant to Cryptography »
Cryptography's Role in Securing the Information Society Get This Book
× 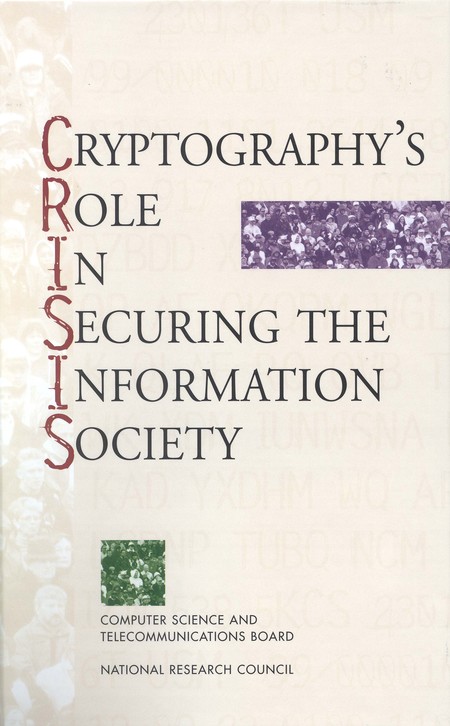