Get This Book
Visit NAP.edu/10766 to get more information about this book, to buy it in print, or to download it as a free PDF.
Page i Share Cite
Suggested Citation:"FRONT MATTER." National Research Council. 1995. Natural Climate Variability on Decade-to-Century Time Scales. Washington, DC: The National Academies Press. doi: 10.17226/5142.
×

Board on Atmospheric Sciences and Climate

The National Research Council was established by the National Academy of Sciences in 1916 to associate the broad community of science and technology with the Academy's purposes of furthering knowledge and advising the federal government. Functioning in accordance with general policies determined by the Academy, the Council has become the principal operating agency of both the National Academy of Sciences and the National Academy of Engineering in providing services to the government, the public, and the scientific and engineering communities. The Council is administered jointly by both Academies and the Institute of Medicine. Dr. Bruce Alberts and Dr. Harold Liebowitz are chairman and vice chairman, respectively, of the National Research Council.

COVER: The Eye of the Storm, the oil painting reproduced on the cover of this book, is the work of Ilana Cernat of Bat-Yam, Israel. Dr. Cernat is linked to the world of intermediate-scale climate change through her son Michael Ghil, a dynamicist who has contributed substantially to our understanding of the interactions that affect climate variability. The Eye of the Storm (1989) is one of several of her paintings that express her concern for the future, particularly what sort of world we will be leaving to the generations to come. A lawyer by training and profession, Dr. Cernat began studying painting in her teens. Her work has been exhibited in Romania, Hungary, Israel, and the United States, and hangs in collections in other countries as well.

Board on Atmospheric Sciences and Climate

The University of Iowa, Iowa City

One objective of the Climate Research Committee of the National Research Council's Board on Atmospheric Sciences and Climate is to promote progress in climate research through the organization of workshops and the preparation of reports. Over the course of a number of meetings and study sessions, the Committee began to recognize that climate variability on decade-to-century time scales had received significantly less attention than was warranted by its relevance to society. Much of climate research has focused either on seasonal-to-interannual climate variability, or on potential long-term climate change in response to human activities. These two research topics are of critical importance, but we cannot adequately address climate and climate change without also considering decade-to-century-scale variability.

Consequently, the CRC sponsored a workshop on Natural Climate Variability on Decade-to-Century Time Scales, which was held September 21-25, 1992. The conference was organized by CRC members Kirk Bryan, Michael Ghil, Doug Martinson, and Lynne Talley. It was generously sponsored by NOAA, NASA, DOE, and NSF, through the Climate Systems Modeling Program of the University Corporation for Atmospheric Research, with later assistance from EPA, USDA, the USAF Office of Scientific Research, and the Office of Naval Research. Much of the success of this workshop can be credited to the eagerness of members of the scientific community to participate and to contribute timely papers on the diverse topics that constitute this important subject.

This volume is built around the papers presented at the workshop. The organizers wished to obtain the broadest coverage of the topic possible at one meeting, recognizing that the collection of papers would be representative rather than complete and that their findings would not always be unambiguous. A commentary on each paper by its discussion leader has therefore been included, as well as an edited version of the ensuing discussion; both of these highlight uncertainties and offer additional information.

While in Irvine, the CRC selected (from among their and their panels' ranks) an expert in each of the fields represented—atmospheric and ocean observations, atmospheric and ocean models, coupled models, and proxy climate indicators—to serve as editor and first reviewer of the papers in the appropriate section of the workshop volume. To provide a context for the papers and appropriate references to germane material not covered at the workshop, the members of this editorial committee contributed an essay introducing each

section. The editors, chaired by Doug Martinson, were responsible as well for initially drafting the conclusions and recommendations, and their efforts in producing this seminal volume are greatly appreciated by the CRC. We are also indebted to Ellen Rice not only for editing the papers and discussions but for seeing the volume (and its contributors) through the entire preparation, review, and production process.

The Climate Research Committee's goal was to produce a reference document on natural climate variability on decade-to-century time scales that would encourage greater interaction among the disciplines involved and between modelers and observationalists. We hope that this volume will serve as a foundation for new and stronger research programs on climate variability on these scales, which in turn will yield a broader and sounder understanding of the climate system and enhance the predictive capability that serves our society's needs.

Next: EXECUTIVE SUMMARY »
Natural Climate Variability on Decade-to-Century Time Scales Get This Book
× 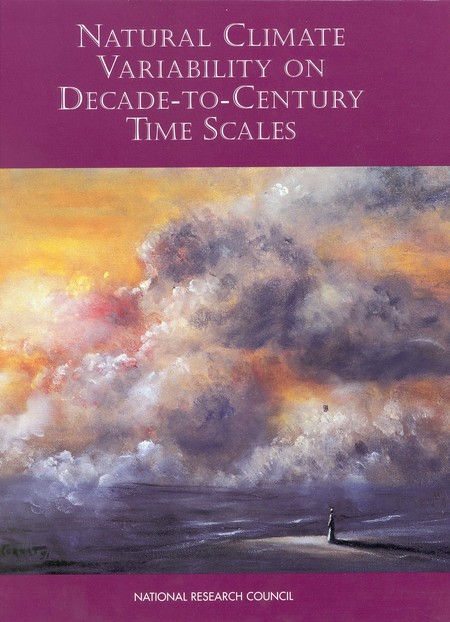 This volume reflects the current state of scientific knowledge about natural climate variability on decade-to-century time scales. It covers a wide range of relevant subjects, including the characteristics of the atmosphere and ocean environments as well as the methods used to describe and analyze them, such as proxy data and numerical models. They clearly demonstrate the range, persistence, and magnitude of climate variability as represented by many different indicators. Not only do natural climate variations have important socioeconomic effects, but they must be better understood before possible anthropogenic effects (from greenhouse gas emissions, for instance) can be evaluated. A topical essay introduces each of the disciplines represented, providing the nonscientist with a perspective on the field and linking the papers to the larger issues in climate research. In its conclusions section, the book evaluates progress in the different areas and makes recommendations for the direction and conduct of future climate research. This book, while consisting of technical papers, is also accessible to the interested layperson.