Get This Book
Visit NAP.edu/10766 to get more information about this book, to buy it in print, or to download it as a free PDF.
« Previous: Part II: Implications for Health
Page 47 Share Cite
Suggested Citation:"Introduction to Afternoon Session." Institute of Medicine. 1996. 2020 Vision: Health in the 21st Century. Washington, DC: The National Academies Press. doi: 10.17226/5202.
×

Chairman of the Department of Medicine, Physician-in-Chief, and Anton and Margaret Fuisz Professor of Medicine, Georgetown University Medical Center

The year 2020 will bring with it changes in the health care system and the way in which we care for our patients that will be greatly influenced by other events in society and other changes that surround us.

As I thought about this, I was reminded of Oliver Wendell Holmes when he said, ''The truth is that medicine is as sensitive to outside influences—political, religious, philosophical and even imaginative—as is the barometer to changes in the atmospheric density.''

One of the major changes, of course, is the movement toward a more market-driven health economy. Our image of Sir William Osler as the hero of American medicine slowly fades into the portrait of Adam Smith. I must confess, as one who spent some time at the Wharton School, that I have worshipped at the altar of the free market and I continue to believe that it is remarkably powerful. The market brings us certain strengths that help us to respond to the public's choices and desires in ways that are remarkably quick, breathtaking, and sometimes disruptive. It has caused us to question, especially during the past three years, what the proper role of government is in a market-driven health economy.

As we look to the year 2020, we must ask continuously about the proper role of government in such a market-driven economy. Will the market be governed by government? Will government try to make the market work as

well as it possibly can, to make up for information deficiencies and to help consumers to choose more wisely? Will it ensure that there is entry into and exit from the market that allows the kinds of choices to be made among options that otherwise might not be available if entry were limited? If the government's role is to help the market work well, what will happen when the market cannot work—when access is limited and certain people cannot get in? What will happen to education and to research—areas in which the market generally fails us?

Third, if government is to help ensure that the failures of the market are compensated either by making the market work as well as possible or by substituting for the market, there will also be a role in which government is the prudent purchaser from the market, whether we are talking about Medicare, Medicaid, the Department of Veterans Affairs, or the Defense Department. The role of government in the future will be an important one, even with a market-driven economy.

Much of the discussion in this session traces the boundaries between a market-driven economy in health care and the proper role of society as it is expressed through government. I anticipate learning about how that might help our institutions evolve. What might our institutions become in the future, as horizontal and vertical integration proceeds, as networks continue to be developed, as risk sharing leads to the need for information sharing, and as our relationships change? The latter include relationships between clinicians and their patients, relationships among different kinds of clinicians, and importantly, relationships among patients, clinicians, and their organizations.

In closing, let me offer an observation that I think is very helpful for those of us who are so much of this market and of health care that sometimes we cannot understand what is happening. Walter Lippman once said, "You cannot see the play and be in it." In this session, we hear from some people who are in the play, but who seem to be able to see it as well.

Cardinal John Newman once said that he did not have much use for all of this futurism: "I do not ask to see the distant future. One step is enough for me." However, in the current health care environment, one step might not be enough.

Next: Risk and Responsibility: The Evolution of Health Care Payment »
2020 Vision: Health in the 21st Century Get This Book
× 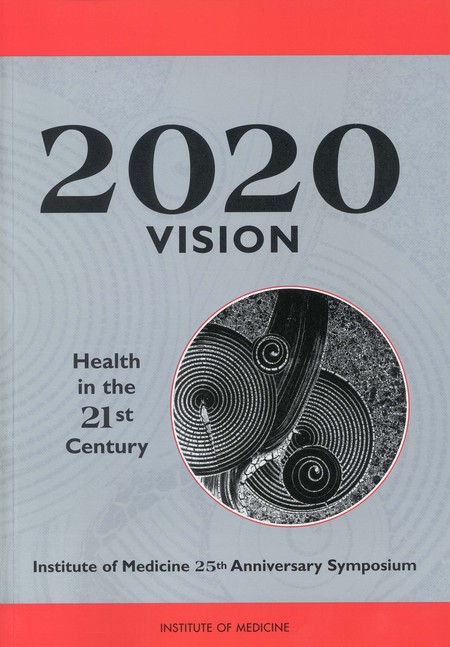 This book contains the proceedings of the Institute of Medicine's 25th Anniversary Symposium. Its chapters comprise presentations by eminent health care professionals and policymakers concerning the challenges and opportunities that likely lie ahead for the United States—and internationally—over the next 25 years. These presentations cover such topics as world population and demography; global health; information and communications; risk, responsibility, and the evolution of health care payments; the role of institutions in health; and the health work force.