Get This Book
Visit NAP.edu/10766 to get more information about this book, to buy it in print, or to download it as a free PDF.
« Previous: APPENDIX B: LIST OF ACRONYMS AND ABBREVIATIONS
Page 285 Share Cite
Suggested Citation:"APPENDIX C: GLOSSARY." National Research Council. 1996. Bridge Builders: African Experiences With Information and Communication Technology. Washington, DC: The National Academies Press. doi: 10.17226/5260.
×

The transmission speed of an asynchronous communications channel. Technically, it refers to the maximum number of changes that can occur per second in the electrical state of a communications circuit. Often baud is used interchangeably with bits per second.

All computer data is composed of tiny electrical pulses called Bits (short for binary digits). Each pulse represents a single digit of data. A group of eight bits is called a byte. Bytes are measured in units of a thousand, thus kilobyte.

A system with a computer, modem, and phone line that acts as a central point for information exchange. It can be used for electronic mail and for storing files that can be downloaded.

Stands for compact disc/read-only memory. A high density storage medium on which electronic data is etched and read by a laser beam.

A form of computer-based communications that emulates a face-to-face conference where people meet to discuss issues of common concern. Computer conferences

include a ''messaging" module to simulate the private discussions that often take place at meetings but they also permit communication among multiple users and allow flexible treatment of conference comments.

Databases are organized collections of information. They are used to file, search, and retrieve data.

Publishing by means of a personal computer. DTP is the product of technological advances in personal computing, print graphics, and computer-generated typography. It synthesizes the capabilities of typesetting, graphic design, book production, and platemaking in one integrated, cost-effective hardware and software configuration.

Computer-based messaging. The transmission of letters and messages from computer to computer over a network.

A high-performance personal computer that serves all the users of a local area network. It provides access to files and software.

A magnetic storage medium. The floppy disk is compact, light, and portable. You can input or output data or software applications between a floppy disk and the computer.

File Transfer Protocol. Allows users to exchange files between their workstations and remote computers connected to the Internet. It is most useful for retrieving files from public archives that are scattered around the Internet.

A device that connects two dissimilar LANs or that connects a LAN to a WAN, a server, or a mainframe. It reformats the data so that it is acceptable for the new network before passing it on.

A hardware component used for storing software, applications, and data. It has a higher capacity and faster speed than a floppy. Hard disks are sealed units not usually meant to be removed from the computer.

The central processing unit, monitor, keyboard, mouse, printer, and other equipment associated with a computer system.

Used to refer to applications that engage the computer user by prompting for certain responses and then reacting to those responses in what seems like original ways.

A method of connecting computers, peripherals, and communications equipment within a restricted locality, such as a building or campus.

A unit of measurement, equal to one million electrical vibrations or cycles per second, commonly used to measure the clock speeds of computers.

A device that connects a computer to a telephone line and converts the digital data from the computer into analog (sound) frequencies. The modem sends the sounds through the phone line to a receiving computer's modem, which then turns the sounds back into a digital form that can be displayed on the receiving computer's screen. (MODEM is a contraction of modulator/ demodulator.)

The video display terminal (VDT); the part of the personal computer system that looks like a TV screen. It allows the user to see text and graphics as it is entered into the computer.

Individual computers linked in such a way that users can share software and hardware (for example, printers) and communicate with each other.

The "state" of being connected, either via a modem or a dedicated line, to a distant database or to another computer.

The master program that controls the computer hardware and applications. Also called the system software.

A "bundle" of data. In some types of electronic communications, data is broken into small chunks that traverse the networks independently.

A wide-area network that achieves high data transmission speeds by dividing information into sections, called packets. The packets are then transmitted by the most efficient route and reassembled at their destination.

Hardware components that are not essential to the basic operation of the computer but that may be necessary to perform certain applications. Peripheral hardware includes printers, scanners, and modems.

The lowest level of the Fidonet hierarchy. Points are connected to hubs and hubs to hosts in order to move mail through the system.

A method by which a central computer calls or "polls" another computer to see if that computer has electronic messages to transmit. Polls can be set up to automatically call another computer when the rates are lower or when traffic is minimal.

The computer's short-term memory or the electronic "work space" in which software, programs, and data reside while they are active.

A measurement, usually expressed in linear dots per inch (dpi), of the sharpness of an image generated by an output device such as a printer or monitor.

A device that connects networks that use the same protocols together and passes information among them.

Hardware device that allows the transfer of photographs, graphic images, or text to the computer. Scanners convert the image to a form than can be manipulated and stored by the computer.

The applications, data, and operating systems associated with computer systems.

The Internet standard protocol for remote terminal connection service used for logging into and searching other computers connected to the Internet. It allows your computer to interact with a remote timesharing system at another site as if your terminal were connected directly to the remote computer.

Device that insures a steady and clean supply of electricity to the computer. A sudden loss of or change in power can destroy data and cause damage to a computer. UPSs give the user time to exit from all active applications and save all current data in the event of a power outage.

An operating system for a wide variety of computers, from mainframes to personal computers. It supports multi-tasking and is suited to multi-user environments.

A program designed to enter a computer without the user's knowledge and perform tasks that can be destructive to the data and software stored in the computer.

A rectangular, on-screen frame through which you can view a document, worksheet, or other application.

A windowing environment and application program interface for MS-DOS that brings to IBM compatible computers some of the graphical user interface features of the Macintosh computers.

Pronounced wizzy-wig, an acronym for What You See is What You Get. A term used in desktop publishing that means that what you see on the computer screen is exactly what you get on paper when you print.

Bridge Builders: African Experiences With Information and Communication Technology Get This Book
× 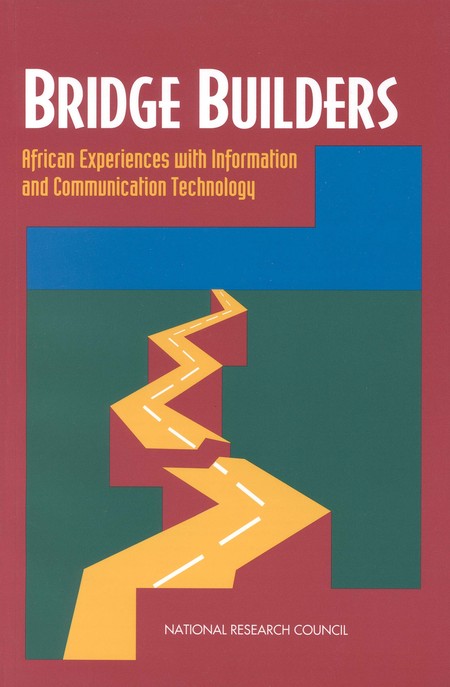 This volume tells 16 remarkable stories—first person accounts of how information and communication technologies have been successfully introduced into institutions for the benefit of scientists and engineers in sub-Saharan Africa. These case studies focus on the lessons learned in designing and implementing projects dealing with scientific and technological information and examine the impact.