Technology Transfer Systems in the United States and Germany: Lessons and Perspectives (1997)

Visit NAP.edu/10766 to get more information about this book, to buy it in print, or to download it as a free PDF.
Page i Share Cite
Suggested Citation:"Front Matter." National Academy of Engineering. 1997. Technology Transfer Systems in the United States and Germany: Lessons and Perspectives. Washington, DC: The National Academies Press. doi: 10.17226/5271.
×

NATIONAL ACADEMY PRESS â¢ 2101 Constitution Avenue, NW â¢ Washington, DC 20418 NOTICE: The National Academy of Engineering was established in 1964, under the charter of the National Academy of Sciences, as a parallel organization of outstanding engineers. It is autonomous in its administration and in the selection of its members, sharing with the National Academy of Sci- ences the responsibility for advising the federal government. The National Academy of Engineering also sponsors engineering programs aimed at meeting national needs, encourages education and re- search, and recognizes the superior achievements of engineers. Dr. Wm. A. Wulf is president of the National Academy of Engineering. The Fraunhofer Society was established in 1949 and obtained its present semipublic status of a federal research institution with the mission of applied research in 1973. Most of its nearly 50 insti- tutes conduct research in various areas of technology. A considerable share of this work is contract research for industry. The Fraunhofer Institute for Systems and Innovation Research, which is re- sponsible for this study, is active in the interdisciplinary field of technology, economy, and politics. It often works for the German government as an advisory body. Professor Dr.-Ing. H.-J. Warnecke is president of the Fraunhofer Society. This report is the result of work conducted by an independent panel appointed by the Council of the National Academy of Engineering and the President of the Fraunhofer Society. The panel members responsible for the report were chosen for their expertise, with regard for appropriate balance. Parts I and II of this publication have been reviewed by a group other than the authors according to procedures approved by a National Academy of Engineering report review process. Parts I and III have been reviewed by various external experts and internally by the Fraunhofer Institute for Systems and Innovation Research. Funding for this effort was provided by the German-American Academic Council Foundation. Library of Congress Cataloging-in-Publication Data International Standard Book Number 0-309-5530-X Copyright Â© 1997 by the National Academy of Sciences No part of this book may be reproduced by any mechanical, photographic, or electronic procedure, or in the form of a phonographic recording, nor may it be stored in a retrieval system, transmitted, or otherwise copied for public or private use, without written permission from the publishers, except for the purpose of official use by the United States government. Printed in the United States of America

Preface Increasingly, the value of science and engineering research to society is mea- sured by how readily research results are translated into useful products and ser- vices. Fundamental to this process is technology transfer, which has been the subject of growing public discourse since the early 1980s and is now more than ever a focal point of policy interest. This renewed attention to technology trans- fer is occurring at a time when expanding international markets, global competi- tion, and other pressures are forcing companies to rationalize or reengineer their operations, often in the face of increasingly constrained resources. The following consensus study, prepared by a binational panel of Ger- man and American experts, documents the significance of effective technology transfer to industrial competitiveness in a global economy. The studyâs findings make clear that it is no longer appropriate to view technology transfer as a simple one-way transferâfrom research performer to technology userâof processed knowledge and finished concepts. Rather, technology transfer should be under- stood as a mutual, multidirectional exchangeâcomprising many different forms and mechanismsâwithin and between nonindustrial research institutions and industry. This comparison of the origins, framing conditions, instruments, and re- cent development of the German and American technology transfer systems re- veals strengths and weaknesses in both countries. It also offers a starting point from which each nation can pursue new paths toward strengthening economic and technological performance, as well as cultivate more intensive, mutually advantageous international collaboration in technology transfer. The binational study panel, comprising experts from 18 scientific and technological institutions and enterprises in Germany and the United States, has articulated important, v

vi PREFACE well-founded recommendations for improving and further developing the Ger- man and American technology transfer systems. I am confident that these rec- ommendations will be given serious consideration by scientific, economic, and public policy communities on both sides of the Atlantic. Furthermore, the study speaks to several interesting possibilities for further dialogue between experts in both countries. On behalf of the German-American Academic Council, I would like to thank the cochairmen, H. Norman Abramson and JosÃ© EncarnaÃ§Ã£o, and their colleagues on the binational panel for their considerable efforts on this project. I would also like to thank the staff of the U.S. National Academy of Engineering and the Ger- man Fraunhofer Institute for Systems Innovation Research who worked on the project, in particular the co-directors for the study, Proctor P. Reid and Ulrich Schmoch. PROF. DR. HEINZ RIESENHUBER President, German-American Academic Council Foundation

Acknowledgments This study has three parts: an overview and comparative report (Part I), a U.S. country report (Part II), and a German country report (Part III). These three reports were prepared by staff of the U.S. National Academy of Engineering (NAE) and the German Fraunhofer Institute for Systems and Innovation Research (FhG-ISI) based on contributions of members of the binational panel, commis- sioned papers, and staff research. The findings and joint recommendations in Part I represent the consensus of the full binational panel. Part I also includes country-specific recommendations for which each of the respective national del- egations to the binational panel is solely responsible. Each national delegation was responsible for developing, reviewing, and finalizing its country report. Each delegationâs review of its national technology transfer system was greatly en- riched by the insightful questions and comments of members of its counterpart delegation. The editors would like to thank all members of the binational panel for their considerable efforts on this study. They would also like to thank FhG-ISI re- search staff members Rainer Bierhals and Viola Peter, and NAE researcher Simon Glynn for their valuable contributions to the two country reports. Renate Klein and Penelope Gibbs provided critical administrative and logistical support. Greg Pearson, the NAE editor, greatly improved the style and logical structure of the report and helped prepare it for publication. Finally, the editors would like to express their appreciation to the German- American Academic Council for its generous financial support of the project. vii

FIGURES AND TABLES xv 3.22 Budget structure of 30 consolidated Fraunhofer institutes in West Germany, 323 3.23 Industry-oriented activities of 30 consolidated Fraunhofer institutes in West Germany, 1994, 324 3.24 Budget structure of 30 consolidated Fraunhofer institutes in West Germany, by research area, in 1994, 325 3.25 Typical division of labor between Fraunhofer institutes and industry, 326 3.26 Share of FhG industrial contracts, according to research area, 327 3.27 Specialization of German Patent Office patents held by the FhG in relation to the average distribution at the EPO for the period 1989 to 1992, 331 3.28 Evaluation steps for publicly funded projects involving industrial cooperative research, 336 3.29 Public and industrial funds for cooperative research, 1986â1993, in constant 1980 DM, 337 3.30 Volume of public funds and industrial funds spent on cooperative research, 339 TABLES 1.1 German and U.S. R&D Expenditures, Percentage by Source of Funds and Performing Sector, 1994, 4 1.2 The Relative Scale of the German and U.S. Technology Transfer Systems in Context, 5 1.3 Distribution of Government R&D Budget Appropriations in the United States and Germany, by Socioeconomic Objective, 1994, 8 1.4 Functional Similarities Between Research Institutions in the United States and Germany, 11 1.5 Support for German and U.S. Academic R&D, Percentage Share by Contributing Sector, 1994, 13 1.6 Research Expenditures at Universities in the United States and Germany, Percentage by Disciplinary Field, 1993, 14 2.1 U.S. Expenditures, by Performing Sector and Source of Funds, 1995, 66 2.2 Support for U.S. Academic R&D, Percent Shares by Sector, 69 2.3 U.S. Defense-Related R&D, Various Comparisons, 71 2.4 Distribution of Government R&D Appropriations by Socioeconomic Objective in the United States, 1987 and 1994, 73 2.5 Federal and State Government Investment in Cooperative Technology Activities, by Type of Program, Fiscal Year 1994, 78 2.6 High-Tech Companies Formed in the United States, 1960â1994, 86 2.7 Top 20 Most-Emphasized U.S. Patent Classes for Inventors from the United States and Germany, 1993, 89 2.8 Industry-Sponsored Research as a Share of Total Academic Research Expenditures at the Top 20 Research Universities, Fiscal Year 1994, 93

Next: Part I: Overview and Comparison »
Technology Transfer Systems in the United States and Germany: Lessons and Perspectives Get This Book
× 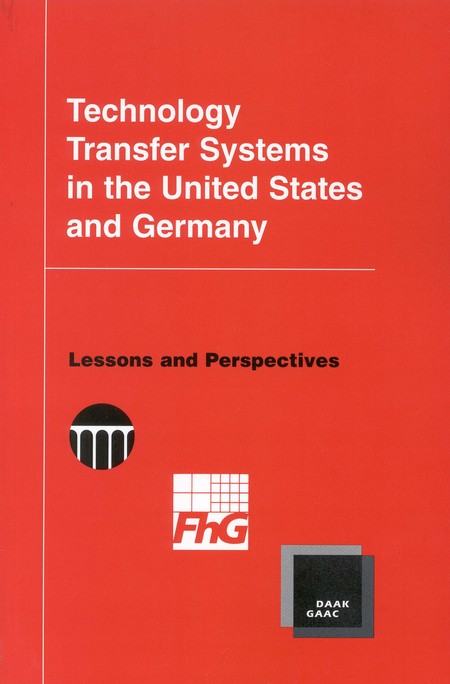 This book explores major similarities and differences in the structure, conduct, and performance of the national technology transfer systems of Germany and the United States. It maps the technology transfer landscape in each country in detail, uses case studies to examine the dynamics of technology transfer in four major technology areas, and identifies areas and opportunities for further mutual learning between the two national systems.