Health Consequences of Service During the Persian Gulf War: Recommendations for Research and Information Systems (1996)

Visit NAP.edu/10766 to get more information about this book, to buy it in print, or to download it as a free PDF.
Page i Share Cite
Suggested Citation:"Front Matter." Institute of Medicine. 1996. Health Consequences of Service During the Persian Gulf War: Recommendations for Research and Information Systems. Washington, DC: The National Academies Press. doi: 10.17226/5272.
×

Preface The Committee to Review the Health Consequences of Service During the Persian Gulf War was charged to assess actions taken by the secretaries of the Department of Defense (DoD) and the Department of Veterans Affairs (DVA) to collect and maintain data on the health of Persian Gulf veterans, to make recommendations to improve the collection and maintenance of such data, and to determine whether there is a sound scientific basis for an epidemiologic study of the health consequences of service and, if so, to recommend the types of studies that should be undertaken. The committee presents 14 findings and 16 recommendations that are intended to improve the nation's understanding of the health consequences of military service in the Persian Gulf, to ameliorate or prevent future health consequences to troops deployed there or in other conflicts, and to improve and accelerate the collection of the information necessary for studying potential problems in the future. As we publish this report, it will have been about 6 years since approximately 697,000 Americans were deployed to the Persian Gulf, while a nation watched the war unfold on the various news networks. Many questions remain about the health of Persian Gulf veterans and the possible causes of the medical symptoms that many veterans have reported. Some persons believe that a new "Gulf War Syndrome" has appeared and that the symptoms and illnesses that are unexplained are in fact a new disease. v

Vl PREFACE In January 1995, this committee published a first report, Health Consequences of Service During the Persian Gulf War: Initial Findings and Recommendations for Immediate Action (Washington, D.C.: National Academy Press), that was critical of the initial actions taken by the DoD and DVA to address these questions, but we are encouraged that these and other organizations have improved their approach to dealing with the medical and social issues in a more organized, coordinated, sympathetic, and effective manner. However, there is still much to do and we trust that the additional recommendations in this report will contribute to further improvements. The questions of whether a Gulf War veteran is ill and whether that illness was caused by Persian Gulf service are separate and distinct. Our charge and this report address ways to approach the latter question. The former question, although not in the committee's charge, was ever present in its deliberations. The committee was provided with ample evidence that there are veterans who are sick, and we are concerned that they all be provided with proper diagnosis and care. Those of us who were not in the Gulf can only imagine what it was like for the thousands of men and women who were uprooted from families, jobs, and daily existence; to be suddenly transported to a harsh climate; to be injected with vaccines not previously used in the active military; to wait many months for "action" to occur; to wonder whether the war would involve chemical and biological warfare; to witness a brief but intense battle with many enemy casualties; and then, just as suddenly, to return to their earlier routine of daily living in the United States. ~ ~~ ~ ~~ Men and women served side by side under conditions that increased the stresses connected with being in these grim surroundings. How all these Gulf experiences relate to the health of veterans is a complex and challenging question. Although determination of whether a new disease or new syndrome has appeared was not in the committee's charge, we frequently discussed this issue because it helped to enlighten and focus our discussions about the matters we were asked to address. There is a long history in medicine of controversy over the existence of conditions that had not been seen earlier or had not been recognized as separate disease entities. Some of these claimed conditions have faded away, whereas others have become established and generally accepted. Recent examples of the latter are AIDS, Legionnaires' disease, and toxic shock syndrome. For a disease designation to be accepted as valid, criteria need to be set for the diagnosis of that disease so that there will be consistency in reporting. At this time, although studies of Gulf War veterans suggest that these veterans suffer from a variety of recognized diseases, such studies do not establish the existence of a new disease. It is possible that additional findings from research in progress will suggest a new medical entity. Further efforts to identify a Gulf War Syndrome, if it exists, will require substantial new evidence from any

PREFACE . . V11 research undertaken, but again this issue is separate from whether these ill people need medical care. Signs and symptoms without a diagnosis or apparent cause are found in every medical practice; clinical medicine is neither perfect nor all-knowing. Although physicians may fail to provide a medical reason for some of these signs and symptoms, the illnesses and related disability have to be addressed as well as possible, independent of efforts to understand causes. All of us in the health care and public health fields are committed to using the scientific study methods available to us in an attempt to understand and better explain what is presently unknown. Only in this way can we make progress in defining, preventing, and treating disease. Observations, information, and reports by individual veterans provide insight into what it was like to serve in the Gulf, and studies that are now being designed should continue to seek out and consider input from those who were there. Unstructured reports can direct attention to problems that need study, but only rarely can they provide definitive evidence about the appearance of a new medical problem. That is the case with the Gulf War Syndrome. The numerous moving personal stories about illness in returned veterans have rightly generated concern, followed by preliminary research studies. Investigators still will need to use appropriate study designs and methods to obtain the best possible information, conduct equally appropriate analyses, and systematically evaluate the evidence. Knowledge gained in this way will not only benefit the Persian Gulf veterans, but will also help guide DoD and DVA to identify preventive actions that could lessen the likelihood of adverse health outcomes of future deployments. There may also be important extensions to the diagnosis and treatment of exposures and stresses in the civilian population. Our report is intended to be an evidence-based assessment, so conclusions are inevitably shaped by the evidence that was available at the time the report was written. A substantial research effort is under way, and understanding of the health effects of the Persian Gulf War will evolve as new findings emerge. At the time this report was sent for external review in June 1996, the committee learned that a bunker destroyed in March 1991 may have contained a chemical warfare agent and that troops located 3 or more miles away might have been exposed. DoD officials appearing at a press conference indicated that investigation of this and other incidents is ongoing. Details have since been added (Transcript from President's Advisory Committee on Persian Gulf Veterans' Illnesses, Chicago, Illinois, July 8-9, 1996, and Denver, Colorado, August 6, 1996; Persian Gulf Veterans' Illnesses Investigative Team posting on the Internet, August 6, 1996~. The late reporting of this incident and the press conference statement that the investigation of records from the war is still not finished continue to raise questions about the completeness of exposure information provided by DoD to date. We encourage disclosure of all

. . . V111 PREFACE information that may inform the public understanding about the health effects of Persian Gulf service. As a committee, we are concerned about the health effects of military service, and we are hopeful that DoD and DVA will consider our recommendations to improve the body of information and preventive interventions for the health of Persian Gulf War and future veterans. Many persons helped the committee in the preparation of this report. First, we have been blessed with an unusually strong staff. Dr. Diane Mundt, as study director, brought to this task a great store of knowledge about epidemiology, biostatistics, military health records, chemical hazards in the field, and related matters, but even more important were her constant oversight of each part of our work and of the role of each committee member; her gently persuasive urging to complete this task, improve on that one, and start a third; and her remarkably comprehensive knowledge about other efforts to understand and improve the health of Gulf War veterans. While the committee wrote the text and takes full responsibility for it, Dr. Mundt's comprehensive attention to improving how we presented our work has made it a far stronger document. Appendixes E, F. and G are among her many contributions. Ms. Amanda Hull Murray was tireless in supporting Dr. Mundt and the committee, with special responsibilities for the critical tasks of learning about and obtaining countless documents (only a fraction could be cited here), coordinating the many presentations to the committee, and aiding veterans and others who had information of potential value to us. Ms. Carliss Parker-Smith supported the work of the office and arranged the details of our 14 committee meetings no mean task with 18 sometimes fractious committee members and countless other persons simultaneously clamoring for attention to their questions and contributions. We also thank Ms. Laura Baird and Ms. Susan Fourt for library assistance; Mr. Michael Edington, Ms. Janet Ross, and Ms. Florence Poillon for editorial assistance; many government and nongovernment agencies and organizations for information provided; and countless individuals, including the Persian Gulf veterans who provided both input and insight. Appendixes C and D give some specifics about the persons and organizations who were helpful in this respect. John C. Bailar III, Chair

Next: Executive Summary »
Health Consequences of Service During the Persian Gulf War: Recommendations for Research and Information Systems Get This Book
× 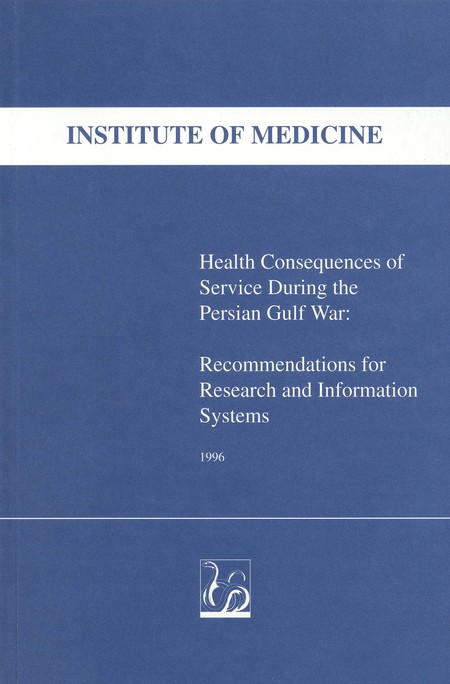 In January 1995 the Institute of Medicine released a preliminary report containing initial findings and recommendations on the federal government's response to reports by some veterans and their families that they were suffering from illnesses related to military service in the Persian Gulf War.

The committee was asked to review the government's means of collecting and maintaining information for assessing the health consequences of military service and to recommend improvements and epidemiological studies if warranted. This new volume reflects an additional year of study by the committee and the full results of its three-year effort.