Telemedicine: A Guide to Assessing Telecommunications for Health Care (1996)

Get This Book
Visit NAP.edu/10766 to get more information about this book, to buy it in print, or to download it as a free PDF.
« Previous: APPENDIXES
Page 229 Share Cite
Suggested Citation:"A EXAMPLES OF FEDERAL TELEMEDICINE GRANTS." Institute of Medicine. 1996. Telemedicine: A Guide to Assessing Telecommunications for Health Care. Washington, DC: The National Academies Press. doi: 10.17226/5296.
×

The following agencies and sponsored projects are included as a representative (but by no means comprehensive) listing of telemedicine activities.

MDTV (Mountain Doctor Television) is adding several new sites in its fourth year of funding from ORHP. In addition to its two hub sites at Morgantown and Charleston and six rural spoke sites in New Martinsville, Gassaway, Buckannon, Elkins, Petersburg, and Madison, the West Virginia School of Osteopathic Medicine, Cabell

Huntington Hospital, a psychiatric facility, and two rural community health centers will join the network. In total, the network will have 15 sites throughout West Virginia. MDTV uses fully interactive audio and video and offers full consultative services. MDTV is also participating in a pilot project for the Health Care Financing Administration to test Medicare payment methodologies for telemedicine.

This project supports three telemedicine networks in the state of South Dakota. The Rapid City Network became operational in February 1995 and is demonstrating store-and-forward technology for teleradiology and telecardiology with hospitals in Custer and Philip. The Sioux Valley Network has been operational since July 1994, demonstrating store-and-forward (for teleradiology) as well as interactive technologies. The McKennan Network began operations on January 1996. An evaluation of the project is being conducted by the South Dakota Department of Health.

The Eastern Montana Telemedicine Network uses two-way interactive video conferencing to deliver specialty care to ten geographically isolated communities in rural eastern Montana. The project has been partially funded with a grant from the Rural Utilities Service. Funding from the ORHP Rural Telemedicine Grant Program has been used to expand the project from four isolated rural communities to seven and to add another hub site at the Behavioral Health Clinic in Billings. Several of the rural counties served are Health Professional Shortage areas.

The Mid-Nebraska Telemedicine Network is a consortium of five rural hospitals and Good Samaritan Health Systems (a regional referral center that includes Good Samaritan Hospital, an acute care facility, and Richard Young Hospital, a psychiatric and chemical dependency hospital). The system provides video conferencing and store-and-forward capabilities. During the first two months of operation, 31 patients were served, saving an average of 133 miles of driving under winter conditions.

Mary Imogene Bassett Hospital is developing a telemedicine system with two rural hospitals and fourteen rural outreach centers. Funds from the Rural Telemedicine Grant program will be used primarily for operating and evaluating the project that was initiated with a grant from the Rural Electrification Administration (now the Rural Utilities Service), U.S. Department of Agriculture.

REACH-TV (Rural Eastern Carolina Health Network) builds upon a network developed by the East Carolina University (ECU) Center for Health Sciences Communication and the Eastern Area Health Education Center. Funding from ORHP was used to support specialty consultations from ECU School of Medicine to Chowan Hospital in Edenton and Goshen Medical Center in Faison. The network will also be used by an interdisciplinary training program for preceptoring, conferencing, and consultations at Faison. Other aspects of this project include an ethnographic study of provider acceptance of telemedicine for psychiatric care, a school-based telehealth project in Plymouth, and a collaborative research project with Emory University in Georgia, evaluating the use of still-image telemedicine technologies. REACH-TV will also participate in a pilot project with HCFA to test Medicare payment methodologies for telemedicine.

The High Plains Rural Health Network provides interactive video conferencing to deliver specialty health care and continuing medical education to several medically underserved areas in Colorado, Nebraska, and Kansas. The network has three hub sites—Denver, Sterling, and Fort Collins—serving five rural spoke sites. Additional sites are becoming connected to the network as part of a recently awarded grant from the Rural Utilities Service. Over a half-dozen sites in Colorado will later be linked to the network through additional funding from a state grant.

Kentucky Telecare is a partnership established to link rural primary care clinics, regional medical centers, and the University of Kentucky Medical Center. A video network currently operating in three rural communities provides clinical, educational, and administrative services. Over the next year, this system will extend to cover

the entire Appalachian region and beyond, as seven more sites are added. Eleven primary care clinics will be equipped to transmit still images over telephone lines to the regional hubs.

The University of Minnesota Hospital and Clinic is connected to three rural sites in Wadena, Fergus Falls, and Staples. The network, operational since March 1995, has provided more than 100 interactive specialty consultations.

This project uses two-way interactive television to link the University of Missouri Health Sciences Center with four rural hospitals and four primary care clinics. The Rural Telemedicine Grant funding served as a catalyst for obtaining additional private funding that supports expansion of the network to six additional rural hospitals, the Ellis Fischel Cancer Center, and the Kirksville College of Orthopaedic Medicine. All 17 sites in the network were scheduled to be operational by the end of summer 1996.

Four rural sites in four states—Washington, Alaska, Montana, and Idaho—are connected to the University of Washington School of Medicine in Seattle. The desktop video conferencing technology allows rural providers and patients to talk directly with consultants while electronically exchanging information and images such as charts or x-ray and MRI films.

In 1995, the National Library of Medicine had contracts totaling $26 million for projects designed to help physicians practice better medicine by utilizing advanced computing and networking capabilities. As described in the HPR News, a National Library of Medicine newsletter for the High Performance Computing and Communications program, the projects most directly involving telemedicine applications include the following.

Toward a National Collaboratory of Health care Informatics

A Pilot Indianapolis-wide Megabit Network for Patient Care and Research

This project will tie together a major teaching hospital with community clinics and pharmacies, providing access to a computerized patient record system, computerized prescriptions, and on-line medical knowledge sources. The evaluation component will assess the cost and patient outcomes changes that result from the use of shared medical information.

Northwestern Memorial Hospital is developing a testbed urban network that provides real-time access to patient clinical information and real-time consultation between linked sites and hospital-based specialists. The objectives of the project are to create information linkages between a hospital, physician offices and clinics, and a university medical school and library through the design and implementation of a technologically innovative and cost-effective communications network.

A High Performance Testbed Network for Telemanagement of Neuro-Imaging

A high-performance wide-area network will be used to transmit neuroradiology images for consultation, patient monitoring, and shared clinical management. This project will examine clinical outcomes that result from use of digital networks to transmit computed tomography and MRI of the brain and spinal cord.

This project will use the newly developed, statewide digital network for creation of a Telecommunications Health Education Resource Center, for the linking of three hospital sites, for improved information services for rural health care providers, and for several telemedicine prototype systems.

This program of the Oregon Health Sciences University will involve the remote diagnosis of skin lesions via teleconsultation to primary care clinics in underserved rural areas of Oregon.

This project will link six outlying hospitals in western Pennsylvania with the University of Pittsburgh Medical Center for teleradiology to improve neurosurgery, neurology, trauma, and critical care. Impact of the system on patient outcomes will be studied.

Collaboration Technology for Real-time Treatment of Patients in West Virginia

A consortium of nine institutions led by the Concurrent Engineering

Research Center of University of West Virginia will build and evaluate a regional telemedicine system for rural areas of the state.

This project at the University of Pittsburgh will develop an "Image Engine" system for storing, retrieving, and sharing a wide range of clinically important images, integrating those images and dynamically linking them to data in the electronic record.

A grant was awarded in September 1993 for the "Evaluation of Clinical and Educational Services to Rural Hospitals via Fiber Optic Cable."

University of Michigan School of Public Health, Medical College of Georgia, and MDTV of West Virginia

This three-year project (sponsored at $1,265,651) consists of developing, testing, and implementing a detailed methodology for evaluating telemedicine. The Medical College of Georgia Telemedicine Center and MDTV at the University of West Virginia Health Sciences Center will provide study sites. A panel of experts will be appointed to develop a detailed methodology for telemedicine evaluation.

See description under ORHP. MDTV will be participating in a pilot project to test Medicare payment methodologies for telemedicine.

See description under ORHP. Funding from the Health Care Financing Administration was used to connect ECU with two other rural sites. REACH-TV will also participate in a pilot project with HCFA to test Medicare payment methods for telemedicine.

This project developed a plan to improve the department's surveillance and data systems. The objectives for an improved system include the ability for users to interconnect between different network systems, the establishment of new network capabilities and interconnections, and the establishment of a common database of demographic and geographic information that allows for surveillance of health risk factors, epidemiological studies, and promotion of community health.

Columbia-Presbyterian Medical Center, the New York City Department of Health, and the Visiting Nurse Services of NYC collaborated to develop and demonstrate an information infrastructure to provide coordinated care to tuberculosis patients in the home, doctor's office, and hospital. The project used automated decision support systems, networks, interactive wireless hand-held computers, and natural language processing technology to coordinate the many providers of care for TB patients, ensure that the appropriate protocols were followed, develop an infrastructure that could be used in the treatment of other diseases, and document how electronic medical records can meet high standards of privacy and confidentiality.

The Commonwealth of Pennsylvania will develop the Keystone State Desktop Medical Conferencing Network which will link physicians in rural/remote areas with resources in urban areas, including consulting physicians and medical libraries and databases. Three tertiary care facilities, a rural hub site, and ten rural physicians are participating.

The Saint Louis Integrated Immunization Information System will provide all public health providers of immunization to children under age two in St. Louis with on-line real-time access to immunization information in hopes of raising the immunization rate.

Next: B GLOSSARY AND ABBREVIATIONS »
Telemedicine: A Guide to Assessing Telecommunications for Health Care Get This Book
× 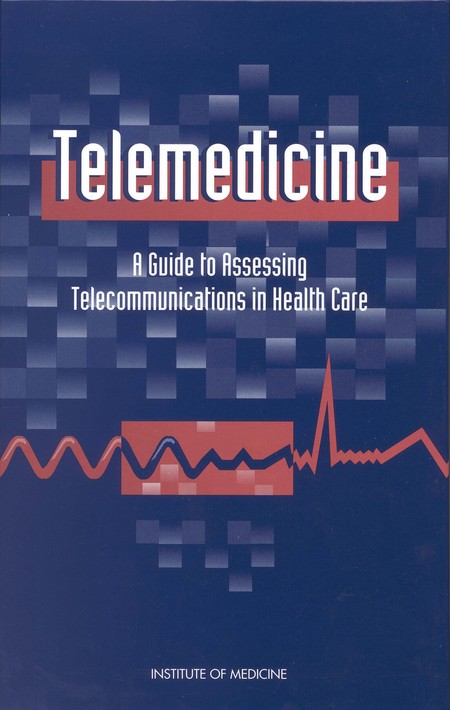 Telemedicine—the use of information and telecommunications technologies to provide and support health care when distance separates the participants—is receiving increasing attention not only in remote areas where health care access is troublesome but also in urban and suburban locations.

Yet the benefits and costs of this blend of medicine and digital technologies must be better demonstrated before today's cautious decision-makers invest significant funds in its development.

Telemedicine presents a framework for evaluating patient care applications of telemedicine. The book identifies managerial, technical, policy, legal, and human factors that must be taken into account in evaluating a telemedicine program. The committee reviews previous efforts to establish evaluation frameworks and reports on results from several completed studies of image transmission, consulting from remote locations, and other telemedicine programs.

The committee also examines basic elements of an evaluation and considers relevant issues of quality, accessibility, and cost of health care.

Telemedicine will be of immediate interest to anyone with interest in the clinical application of telemedicine.