Improving Health in the Community: A Role for Performance Monitoring (1997)

Get This Book
Visit NAP.edu/10766 to get more information about this book, to buy it in print, or to download it as a free PDF.
« Previous: A.8 Vaccine-Preventable Diseases
Page 345 Share Cite
Suggested Citation:"A.9 Violence." Institute of Medicine. 1997. Improving Health in the Community: A Role for Performance Monitoring. Washington, DC: The National Academies Press. doi: 10.17226/5298.
×

Violence is one of America's most challenging and concerning public health problems. More than 2 million Americans are victims of violent injury each year (USDHHS, 1995), and violence is increasingly identified as one of the major concerns cited by citizens in urban and nonurban communities around the country (Rosenberg and Fenley, 1991). Although the public fears random violence, most violent acts are committed by individuals well known to the victim.

Violence is an issue that involves society at large; its causes and consequences permeate all sectors of a community. The committee acknowledges that violence is an issue for which measurement strategies are not standardized and health professionals have poorly defined roles. The prototype indicator set is intended to move the discussion of violence forward, not to be a final word on the issue. The committee chose to include this issue because the health effects of violence are clearly a major area of public concern.

second leading cause for young white men aged 15–24. Violence leads to many injuries as well as deaths, some of which require health care in hospital emergency rooms and other settings. In 1992, about 1 per 10,000 Americans suffered assault injuries (USDHHS, 1995).

The costs of violence are high—estimated at $54,000 per attempted or completed rape, $19,200 per robbery, and $16,000 per assault. A portion of these costs are financial, but the majority reflect pain, suffering, the risk of death, psychological damage, and reduced quality of life (NRC, 1993). Although violence affects all segments of American society, minorities are substantially more likely to be victims of violent crime. In 1990, for instance, African Americans were 41 percent and Hispanics 32 percent more likely than whites to be victims of violent crime (NRC, 1993).

Violent actions including rape, domestic violence, drive-by shootings, and terrorist attacks are highlighted daily in all forms of media. The issues of violence in our society are also highlighted in the content of television fiction and nonfiction programming. It is estimated that by age 18, children will have been exposed to 18,000 televised murders and 800 suicides; most will have seen 100,000 acts of violence on television by the sixth grade (Canterwall, 1992).

Substance use and psychosocial, family-mediated factors are major risk factors for violent behavior. Social factors associated with violence include concentration of poor families in geographic areas, income inequality, population turnover, community transition, family disruption, housing density and other aspects of social disruption, and opportunities for violence such as illegal markets in drugs and firearms (NRC, 1993). Dysfunctional family life (e.g., absent or divorced parents, turmoil and fighting between family members) is an early predictor of violence, especially for youth. Witnessing violence in the home and community is harmful to children and youth exposed to the violent event, even if they are not victims of the violence. Thus, as more violence occurs in homes, in neighborhoods, and in the media, greater percentages of the population are at risk to experience violence.

ing the underlying causes of violence such as substance abuse and social disintegration.

Violence has been widely viewed as a health issue since the 1985 Surgeon General's Workshop on Violence and Health encouraged health professionals to address violence of all types. Violence is also one of the priority targets identified in Healthy People 2000: National Health Promotion and Disease Prevention Objectives (USDHHS, 1991). Specific objectives are included for homicide, suicide, weapons-related deaths, assault injuries, rape, adolescent suicide attempts, adolescent weapons carrying, and other issues. In 1995, ''weapons" was changed to "firearms" and an additional objective was added regarding laws requiring the proper storage of firearms to minimize access and the likelihood of discharge by minors (USDHHS, 1995).

As indicated above, the causes and consequences of violence are broad and diverse, and cover many domains of the field model. Thus, it is possible to measure many dimensions of violence, its consequences, and its risk factors that shed light on the efforts of various community entities to address it.

The direct effects of violence include physical injury, death, and psychological problems. These can be measured through vital statistics (indicators 1 and 2, below), hospital discharge data (indicator 3), or survey data (indicator 4).

the number of gunshot wounds may be available from police departments, since the reporting of such incidents is generally required by law. Police data, however, may underestimate the number of visits. A review of emergency room logs and records would provide this information.

Well-being can depend directly on the physical or psychological consequences of violence, but these dimensions are probably best measured directly. The one dimension that is not captured in health-related statistics is the effect on well-being of concerns about individual safety. A community might reduce fear of violence in three ways: (1) by reducing the actual risk of violence, (2) by helping people adapt to the possibility of violence by giving them information on how to alter their behavior to remain safe, and (3) by making information available regarding the true risks, which might be lower than people think. One way to measure this dimension is as follows:

Violence is a complex problem of human behavior, so there are many ways to measure "individual response" to the social and physical environments associated with it. Some possible measures are as follows:

flected in the fact that both of these indicators are included in Health People 2000. The first indicator can be obtained from vital statistics even in small communities, but the number of cases may be small. If so, the number rather than the rate should be reported. Suicide attempts could be tracked through a hospital-based surveillance system for those cases serious enough to require inpatient or emergency care.

community. Only a small proportion of violent events ever reach the courts and protective services, however, so if the percentage changes over time because of changed social norms about reporting, increased efficiency of the system, or other factors, changes in numbers of cases may not reflect changes in the prevalence of violence in the community. Data from the courts and protective services also can indicate something about the performance of those systems: Do investigators appropriately identify true cases of abuse, and does the system take the proper protective action? However, since reporting patterns may change over time (leading to higher or lower proportions of "true" cases among those reported) and courts and protective service determinations are not infallible, trends in the number or percentage of "positive outcomes" of these systems should be interpreted with caution. In addition, rates of substantiation or service referrals depend on the availability of resources for support services.

Two types of measures can be used to address the role of health care in relation to violence: injuries resulting from violence that require health care and opportunities to prevent violence. Some possible measures are as follows:

As indicated above, the social factors associated with violence include concentration of poor families in geographic areas, income inequality, population turnover, community transition, family disruption, housing density and other measures of social disruption, and opportunities for violence such as illegal markets in drugs and firearms (NRC, 1993). Only some of these factors are amenable to public health or public policy interventions, at least in the short run, but communities might want to monitor all of them to help understand the causes of violence, and to target interventions to the areas in which they are most needed.

Of all of the underlying social factors associated with violence, this might be easiest to measure in communities because of income data available from the decennial census, even at the census block level. It would be important to measure not just level of income, but the concentration of poverty in small areas and disparities with other areas. It might also be possible to measure such items as vacant housing units and the proportion of families that own their own homes.

various types of weapons from assault rifles to concealable handguns.

Although there are some preliminary reports of genetic predisposition to violent behavior, not enough is known at this time to suggest performance measures in this area.

As indicated above, a community's prosperity both depends on and affects violence. Violence carries high economic costs, not only in treating its direct effects, but in terms of pain and suffering, psychological damage, and reduced quality of life. Similarly, economic factors, especially income inequality, are important risk factors for violence. These factors, however, are difficult to measure on a community basis and are reflected in other measures proposed above, so no specific measures are proposed in this area.

From the preceding list of potential indicators, the following 12 are proposed as a primary set that might be used to monitor the performance of the community as a whole and of specific segments within it. Their selection reflects the committee's best judgment, but individual communities must consider available resources, including the availability of data. Comments on other uses of the measures (e.g., in Healthy People 2000), data and measurement issues, and suggestions of where accountability may lie are presented for each of the measures. The relatively large number of indicators in this suggested set reflects the varied forms of violence, causal factors for violence, and possible preventive and remedial interventions.

Of the five measures of the physical consequences of violence, one (firearm-related deaths) can be obtained from vital statistics in every community. The others (assault injuries, rapes, abuse of women by partners, and suicides attempts) might be obtained from a combination of police reports (e.g., through the Uniform Crime Reports System [FBI, 1994]) and state-based hospital discharge data systems. Data from these sources are also available at the local level, but both may underrepresent the actual number of cases for a variety of reasons. A population survey will be necessary to measure one of the proposed indicators (restriction in activities due to fear of violence) and could supplement official records of the nonfatal consequences of violence.

rate representation of the situation in the community. The E-coding of hospital discharge data (to indicate the cause of injuries) would help to identify assault cases, but it is not uniformly done throughout the country.

ity of the health care and education systems, as well as others in the community, to detect possible cases as well as the true incidence of child abuse. The second part of this indicator—the percentage of abused children receiving appropriate social and medical services—measures the ability of these systems to respond to identified needs. Determining whether the services provided are adequate and appropriate is a judgment that must be made in each community, informed by scientific evidence about the kinds of programs that are effective.

Canterwall, B.S. 1992. Television and Violence: The Scale of the Problem and Where We Go from Here. Journal of the American Medical Association 267:3059–3063.

Next: B Methodological Issues in Developing Community Health Profiles and Performance Indicator Sets Michael A. Stoto »
Improving Health in the Community: A Role for Performance Monitoring Get This Book
× 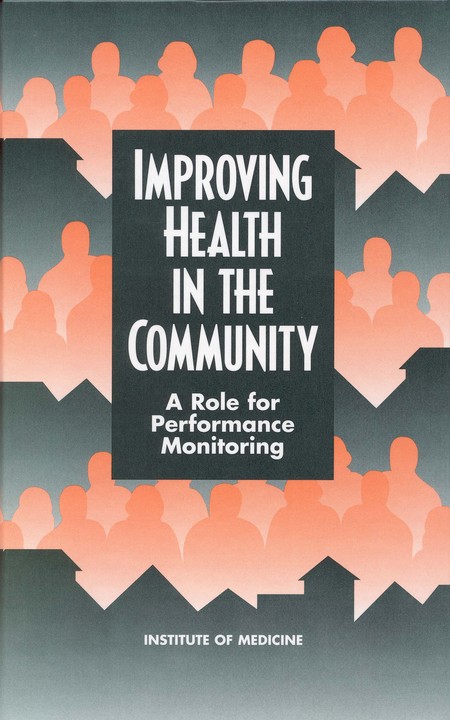 How do communities protect and improve the health of their populations? Health care is part of the answer but so are environmental protections, social and educational services, adequate nutrition, and a host of other activities.

With concern over funding constraints, making sure such activities are efficient and effective is becoming a high priority.

Improving Health in the Community explains how population-based performance monitoring programs can help communities point their efforts in the right direction.

Within a broad definition of community health, the committee addresses factors surrounding the implementation of performance monitoring and explores the "why" and "how to" of establishing mechanisms to monitor the performance of those who can influence community health. The book offers a policy framework, applies a multidimensional model of the determinants of health, and provides sets of prototype performance indicators for specific health issues.

Improving Health in the Community presents an attainable vision of a process that can achieve community-wide health benefits.