Issues in Civilian Outplacement Strategies: Proceedings of a Workshop (1996)

Get This Book
Visit NAP.edu/10766 to get more information about this book, to buy it in print, or to download it as a free PDF.
Page i Share Cite
Suggested Citation:"FRONT MATTER." National Research Council. 1996. Issues in Civilian Outplacement Strategies: Proceedings of a Workshop. Washington, DC: The National Academies Press. doi: 10.17226/5307.
×

Proceedings of a Workshop

The National Academy of Sciences is a private, nonprofit, self-perpetuating society of distinguished scholars engaged in scientific and engineering research, dedicated to the furtherance of science and technology and to their use for the general welfare. Upon the authority of the charter granted to it by the Congress of 1863, the Academy has a mandate that requires it to advise the federal government on scientific and technical matters. Dr. Bruce M. Alberts is president of the National Academy of Sciences.

This work is sponsored by the Office of the Deputy Assistant Secretary of Defense (Civilian Personnel and Policy) and funded under Defense Supply Services Contract No. DASW01-95-C-0139. The views, opinions, and findings contained in this report are those of the author(s) and should not be construed as an official Department of Defense position, policy, or decision, unless so designated by other official documentation.

Copyright 1996 by the National Academy of Sciences. All rights reserved.

COMMISSION ON BEHAVIORAL AND SOCIAL SCIENCES AND EDUCATION

Department of Education, University of Chicago

Institute for Research on Poverty, University of Wisconsin, Madison

Center for Advanced Study in the Behavioral Sciences, Stanford, Calif.

Over the next 5 years, some 75 military bases in the continental United States will be closed. This is part of a larger picture of downsizing and defense conversion efforts brought about as a consequence of the collapse of the Soviet Union as a rival world power and of difficult budget realities closer to home. Reductions in the numbers of military personnel, already well under way, will bring the military to its lowest force levels since before the Korean War. Most of these reductions will be achieved in the form of lower recruiting goals and smaller numbers of accessions, although a significant number of career officers and enlisted personnel will also be affected.

The civilian workforce of the U.S. Department of Defense does not, like the uniformed one, depend on a base of constantly changing young people who serve for a term or two. Downsizing it cannot be accomplished by the relatively painless process of reducing the number of hires. Although the Department of Defense is pursuing all downsizing options, including early retirements, special leaves, and internal transfers, reductions must be accomplished largely by eliminating the jobs of people who have spent their careers supporting the military services. In addition, downsizing through base closings has a direct and concentrated impact on the communities in which the bases are located. In many communities, such as Charleston, South Carolina, the military is the dominant employer. California presents the example of a state suffering not just multiple base closures, but also severe cutbacks in the defense industry, a major source of high-salaried, high-technology jobs. Military installa

tions in small communities throughout the South have encouraged the growth of a service infrastructure that, absent the military presence, the local economies may not be able to support. In all of these cases, the reemployment picture for civilians currently employed at the military bases is not strong; moreover, the impact of base closings will be felt more or less severely by the local economy.

For many employees, help in finding new jobs or training opportunities to make them more marketable is the key to mitigating the effects of base closings. The Office of the Deputy Assistant Secretary of Defense for Civilian Personnel Policy asked the National Academy of Sciences for assistance in understanding the range of outplacement issues and options available to them based on what has been learned in other settings, especially in the private sector.

In February 1996 the Commission on Behavioral and Social Sciences and Education of the National Research Council held a workshop to present existing research and best practices for employee outplacement. Participants included Department of Defense officials involved in developing outplacement policies, academics currently conducting related research, representatives from private industry directly involved in outplacement, and consultants specializing in this area. We gratefully acknowledge the support of Diane Disney, Deputy Assistant Secretary of Defense for Civilian Personnel Policy, and her staff.

We wish to thank Renae F. Broderick for her work in planning the workshop and drafting this proceedings. We are especially grateful to Carolyn Sax, staff of the Commission on Behavioral and Social Sciences and Education, who took on major responsibilities for organizing the workshop and preparing the manuscript. Finally, we are indebted to the workshop presenters and participants for their contributions to the success of the workshop.

Issues in
Civilian Outplacement Strategies
Proceedings of a Workshop

Next: INTRODUCTION »
Issues in Civilian Outplacement Strategies: Proceedings of a Workshop Get This Book
× 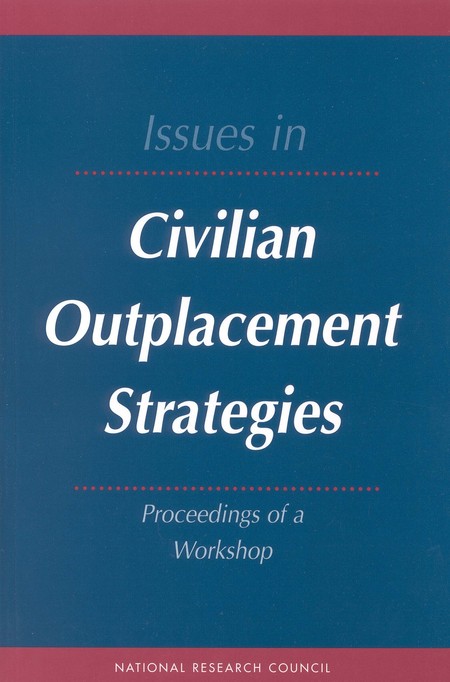 In the past six years, planned downsizing has reduced the civilian work force of the U.S. Department of Defense from over 1 million to just under 850,000. By 2001, approximately 119,000 more civilian jobs will be eliminated. The reemployment picture for civilians is not strong, and the economic impact of base closings will also be felt by the surrounding communities.

This book presents creative ideas for civilian outplacement based on or suggested by private-sector experiences. It discusses a number of issues that the Department of Defense must consider in its outplacement efforts, including organizational planning for effective outplacement services, whether or not to customize services for particular types of employees, monitoring outplacement practices to learn what works, and working with local communities in providing both job search and social services.