From Scarcity to Visibility: Gender Differences in the Careers of Doctoral Scientists and Engineers (2001)

Get This Book
Visit NAP.edu/10766 to get more information about this book, to buy it in print, or to download it as a free PDF.
« Previous: Executive Summary
Page 9 Share Cite
Suggested Citation:"1: Introduction and Overview." National Research Council. 2001. From Scarcity to Visibility: Gender Differences in the Careers of Doctoral Scientists and Engineers. Washington, DC: The National Academies Press. doi: 10.17226/5363.
×

Thus, within just a few years, starting in 1968 and essentially complete by 1972, there was a legal revolution in women’s education and employment rights. It promised, even seemed to guarantee, broad ramifications for women’s careers in science and engineering, but its full implementation would require many battles in the years ahead. One era had ended and a new, more equitable one was beginning.

By the early 1970s, significant changes had occurred in federal civil rights laws governing the treatment of women in higher education. Title IX of the Education Amendments of 1972 required institutions of higher education that received federal funding to treat women and men equally in admissions, funding, residency, and sports, thus eliminating overt discrimination. The Equal Employment Opportunity Act of 1972 specified that educational institutions must abide by equal employment opportunity laws, such as Title VII. The revolution in the laws governing women’s education and employment rights grew out of the resurgence of the women’s movement in the late 1960s and dramatic changes in our society’s view of the role of women at home and in the workplace. The effects of these dramatic societal changes are reflected in the rapid and remarkable changes in the participation of women in higher education, with women accounting for a growing proportion of the enrollment in science and engineering programs.

Overall, since 1973 there have been impressive and promising changes in the entry into and participation of women in science and engineering. Many of these changes are documented in the pages that follow. But while women have clearly made enormous gains in their participation in science and engineering, it is also clear that these advances represent neither unconditional success in overcoming gender inequalities nor assurance of continuing progress in the future.

HISTORY OF THE REPORT

The National Research Council (NRC) has a long and distinguished record of involvement in activities designed to increase the participation of women in scientific and engineering careers. In 1981 the NRC’s Committee on the Education and Employment of Women in Science and Education (CEEWISE) undertook a major study and published Career Outcomes in a Matched Sample of Men and Women Ph.D.s: An Analytical Study (Ahern and Scott 1981). The Ahern and Scott study, as the report came to be known, examined gender differences in the career paths of primarily academic scientists, engineers, and humanists employed between 1973 and 1979. As a portrait of women in science during the 1970s, the study provided definitive answers to several important questions. First, it found that women suffered disadvantages in career outcomes even after controlling for factors in the background of male and female scientists (e.g., prestige of the doctoral department, years of professional experience, and marital status) that might have caused the differences. Second, differences in career outcomes for several cohorts of scientists showed that gender inequalities were not all due to women being younger and thus more likely to be junior faculty rather than in senior positions. Finally, substantial variations across fields in how female scientists fared in academia were documented. The overall conclusion of the Ahern and Scott report confirmed the findings of many earlier studies (Ahern and Scott 1981:iv–v):

…with male and female scientists and humanists closely matched by education, experience, type of employment, and even subfield in many cases, none of the differences we have previously noted in career progress disappear and few diminish. Women remain less likely to be employed although seeking employment, their careers are apt not to develop as fully, and they remain significantly less well paid.

In partial response to the Ahern and Scott report, the NRC’s Office of Scientific and Engineering Personnel (OSEP) held a workshop in 1986 to examine the causes of the underrepresentation and career differentials of women at all levels of science and engineering (Dix 1987a). Following this

workshop, the NRC’s Committee on Women in Science and Engineering (CWSE) concluded that it was essential to monitor how women are faring in science and engineering in order to ensure that an appropriate share of the best and the brightest people, regardless of gender, choose careers in science. This, in turn, led to interest from the policy community and agencies that support scientific education and research in updating the Ahern and Scott study. As a result, CWSE and OSEP proposed the current study to the NRC’s Governing Board.

In 1994, following the approval by the Governing Board, the NRC appointed the Panel for the Study of Gender Differences in the Career Outcomes of Science and Engineering Ph.D. Recipients under the auspices of the Committee on Women in Science and Engineering. The Panel’s mandate was to gain a better understanding of the ways in which the careers of men and women in science and engineering differ, the ways in which they are similar, and the changes that have occurred since 1973. To this end, the Panel extended the path breaking work of the Ahern and Scott study with more recent data and a different methodological approach. Key enhancements include:

These changes in focus and methods of analysis, discussed fully in Chapter 2, provide new and useful information about the careers of men and women in science and engineering. But the answers are still incomplete. Indeed, this was a constant source of frustration for the Panel. In pursuing our mandate to provide a broad overview of the change and lack of change in the last 20 years, we could not pursue each topic in the detail that it deserved. As discussed in our conclusions, there is much more that needs to be learned about the opportunities and obstacles faced by women in science and engineering. The Panel hopes that future researchers will use our report as a starting point for this additional research.

Differences in career outcomes in science and engineering are the result of complex processes that constitute the scientific and engineering career. The educational process leading to the Ph.D. has been described as a pipeline, in which a large flow of children enter the pipe with many “leaks” as students flow towards the doctorate (Berryman 1983; U.S. Congress, Office of Technology Assessment 1988:11–12). Upon receipt of the degree, the participation of women in science is the result of “successive filtering” (Zuckerman and Cole 1975:83). Accordingly, the presence and participation of women in science and engineering can best be understood as a series of processes with the outcomes at each step affecting the choices and opportunities at the next level. For example, there is roughly a 30 percent difference in salaries between men and women who have doctorates in science and engineering. Much of this advantage for men can be “eliminated” by controlling for gender differences in types of work and years of experience. While this does not change the fact that women overall have less well paying jobs, it does help us understand what leads to the observed difference in salary and can guide the development of policies to further improve the status of women in science.

With this in mind, the substantive chapters of the report trace the career through the various filters that affect career outcomes.

The report begins with Chapter 2, which describes the data sets and variables used and explains our methodology. To fully understand the results of later chapters, it is important to understand the basic information presented in this chapter. Finally, Chapter 8 summarizes key findings and presents the Panel’s recommendations.

The small numbers of minority scientists and engineers are a major obstacle for studying their career outcomes. In many cases there are simply too few minorities in science and engineering to support the types of analyses presented in later chapters. This is shown in Figure 1–1, which presents the percent of new Ph.D.s in 1979, 1989, and 1995 by minority status. While the percent of Ph.D.s who are white has declined in all fields since 1979, the increases among other groups are almost entirely for Asian Americans. The numbers of African Americans remains small with only slight increases in engineering and the life sciences. While the percent of Hispanics has increased slightly, as a group Hispanics remain greatly underrepresented. Native Americans are almost entirely absent among new Ph.D.s. The most important issue involving minorities in science and engineering involves increasing their numbers. Unfortunately, the Panel did not have the time or resources to adequately study the complex issues facing underrepresented minorities in science and engineering. Hopefully, this important issue will be the focus of a future study. 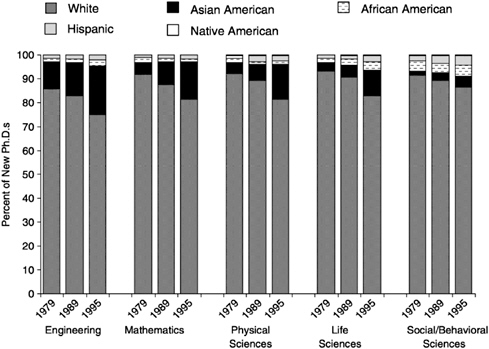 Next: 2: Data and Methods »
From Scarcity to Visibility: Gender Differences in the Careers of Doctoral Scientists and Engineers Get This Book
× 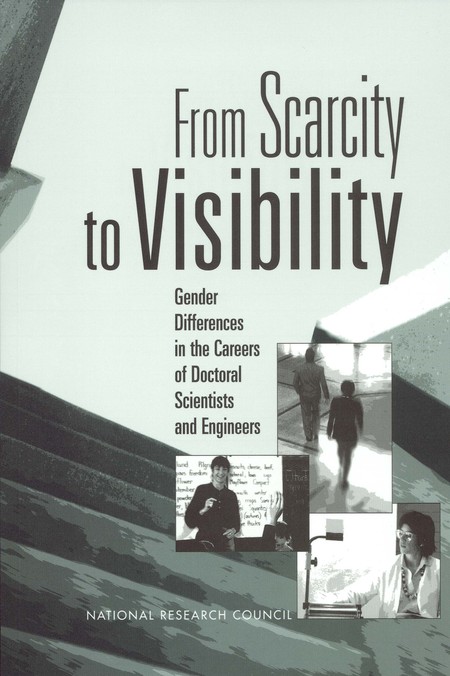 Although women have made important inroads in science and engineering since the early 1970s, their progress in these fields has stalled over the past several years. This study looks at women in science and engineering careers in the 1970s and 1980s, documenting differences in career outcomes between men and women and between women of different races and ethnic backgrounds.

The panel presents what is known about the following questions and explores their policy implications: In what sectors are female Ph.D.s employed? What salary disparities exist between men and women in these fields? How is marital status associated with career attainment? Does it help a career to have a postdoctoral appointment? How well are female scientists and engineers represented in management?

Within the broader context of education and the labor market, the book provides detailed comparisons between men and women Ph.D.s in a number of measures: financial support for education, academic rank achieved, salary, and others. The study covers engineering; the mathematical, physical, life, and social and behavioral sciences; medical school faculty; and recipients of National Institutes of Health grants.

Findings and recommendations in this volume will be of interest to practitioners, faculty, and students in science and engineering as well as education administrators, employers, and researchers in these fields.