The Scientific Bases for Preservation of the Mariana Crow (1997)

Get This Book
Visit NAP.edu/10766 to get more information about this book, to buy it in print, or to download it as a free PDF.
« Previous: Executive Summary
Page 5 Share Cite
Suggested Citation:"1 Introduction." National Research Council. 1997. The Scientific Bases for Preservation of the Mariana Crow. Washington, DC: The National Academies Press. doi: 10.17226/5372.
×

The Mariana crow (Corvus kubaryi), or aga in the Chamorro language, is endemic to the two southernmost islands in the Mariana archipelago, Guam and Rota, and is a federally listed endangered species. The current rate of decline in the Guam population of the aga is serious: in the opinion of the US Fish and Wildlife Service (FWS), the population will soon become extinct unless appropriate action is taken. The Rota population, larger than that of Guam, has probably also declined in recent years. Forested crow habitat is being converted to farmland and developed for other uses associated with the island's increasing tourism and population growth. Guam and Rota, separated by 49 km of ocean, have distinct but related government jurisdictions. Guam is administered as a US territory, and Rota and the other islands in the archipelago form the Commonwealth of the Northern Mariana Islands (CNMI). In any case, the native people of the archipelago, the Chamorros, share a common bond of language and culture throughout the islands.

The aga has been restricted to Guam and Rota in historical times, although there is some evidence that it is a relict species that formerly had a wider distribution (Baker 1951). Formerly, the aga was distributed throughout forested areas on both islands. At one point, crows on Guam were considered abundant enough to be an agricultural pest (Safford 1902; Seale 1901). Likewise, on Rota, they were common enough to be hunted by visitors from Saipan even into the 1970s (Pratt and others 1979). In 1945, after World War II, Baker (1951) found the

crows to be common in forested areas and coconut plantations on Guam but uncommon in areas densely populated by humans. Crows disappeared from southern Guam in the middle 1960s and from central Guam in the middle 1970s (FWS 1984), and now they remain only in the northern part of the island on Andersen Air Force Base. No aga chicks have successfully fledged from unprotected nests since 1987, and only six have fledged from protected nests since 1989. The single chick that fledged in 1989 from a nest tree protected with a steel-wrap and tanglefoot barrier was killed soon after fledging by a monitor lizard. Five other chicks were fledged from nest trees protected with electric barriers between 1992 and 1994 (Aguon and others in press; Wiles and others 1995). Two additional chicks, collected from wild nests in the 1995–1996 breeding season, were successfully hatched and hand-raised in captivity and are being held at the Guam Department of Agriculture Division of Aquatic and Wildlife Resources (DAWR) facilities (Beck and Brock 1996). The aga population on Guam has declined rapidly from about 100 birds in the mid-1980s to about 25 birds at present (Table 1-1). Interestingly, the Rota population appears to have declined substantially in recent years as well (Table 1-1).

Although available survey data suggest a general decline in both wild populations (Table 1-1), these data are difficult to assess because census techniques and census efforts have varied. The accuracy of the variable-circular-plot (VCP) method can also be questioned for crows because their calls can be heard from considerable distances (Engbring and Ramsey 1984). The discrepancies between the number of birds observed and the number of birds estimated suggests that current population estimates are not as accurate as previously reported.

TABLE 1-1 Estimated Populations of Aga on Guam and Rota

(50 CFR 17; 49 FR 33881). Critical habitat on Guam was not designated under the original federal listing but was proposed for two species of bats and four species of birds, including the aga, in June 1991 (FWS 1991). However, FWS withdrew the proposal in 1994 (FWS 1994) after the establishment of the Guam National Wildlife Refuge. The refuge encompasses an overlay of 9,100 ha of cooperatively managed lands owned by FWS, the US Navy, and the US Air Force. The aga is also listed as endangered by CNMI.

An understanding of the genetic relationship between the Guam and Rota populations is critical to evaluating conservation options. Tarr and Fleischer's (1995) mitochondrial DNA (mtDNA) and DNA ''fingerprinting" work on aga, American crows (Corvus brachyrhynchos), and ravens (Corvus corax), although limited, sheds light on this issue. The mtDNA data reveal only one polymorphic site for aga, and each insular population was fixed for all alternate bases at that site. In addition, the total sequence difference between populations was only about one-tenth that between raven populations. Samples were small (8 Guam birds and 10 Rota birds), but DNA fingerprinting indicated close similarity between the populations. Thus, although the two populations are genetically distinct, the differences are very small, and the colonization of Rota from Guam might have been relatively recent.

The genetic diversity within the two populations is of additional interest. The Guam sample included close relatives, but the extent of DNA band-sharing among them was much lower (that is, more genetically diverse: S = 40–47%) than that among the Rota birds, which were sampled from various locations over the island (S = 69–88%). The greater genetic diversity of the Guam population suggests that the Rota population was derived from a fairly recent (on an evolutionary scale) colonization of Rota by relatively few individuals from Guam and that there has been relatively little interchange between populations. Management implications of those findings will be discussed in chapter 5.

Responsibility for the recovery of the aga under the Endangered Species Act rests with FWS. FWS asked the National Research Council to conduct a scientific review of the information available on the aga and to recommend appropriate specific recovery actions to prevent extinction of the Guam population and to ensure species survival. The Committee on the Scientific Bases for Preservation of the Mariana Crow—comprising experts in ornithology, conservation biology, captive propagation, herpetology, avian pathology, behavior, and population ecology—was formed under the Research Council's Board on Biology and charged in March 1996 to review the available relevant environmental information and to prepare a report detailing the status of the two populations of the aga and the management actions necessary for their recovery and conservation (see appendix A, "Statement of Task"). The committee examined the relevant scientific data, held a public meeting, and spoke to numerous persons, including biologists with federal agencies, DAWR, and the CNMI Department of Lands and Natural Resources' Division of Fish and Wildlife (see appendix B, "Acknowledgments"). The committee also visited study sites and research facilities on both Guam and Rota.

This report reflects the committee's analysis of all available information on the aga. Chapter 2 summarizes what is known and identifies what is unknown about the aga's history and decline; it includes a comparison with the 'alala, a demographic analysis, a discussion of extrinsic factors that might have contributed to the decline of the aga, and past conservation and management efforts in behalf of both wild and captive crows. Chapter 3 provides an extensive review of the brown tree snake (Boiga irregularis), the cause of the aga's decline on Guam and a substantial threat to the aga's long-term survival on Rota. Chapter 4 summarizes the committee's major findings and criteria for recovery of the aga. Chapter 5 describes options for management of the aga. Finally, Chapter 6 recommends eleven specific management actions that the committee believes are essential for the aga's recovery. 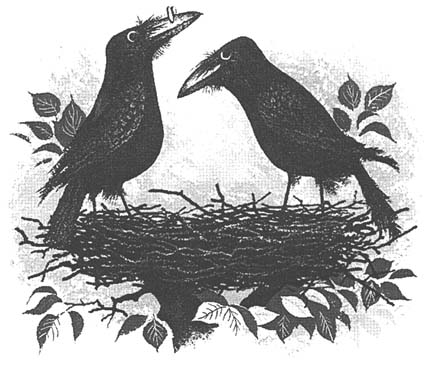 Next: 2 History »
The Scientific Bases for Preservation of the Mariana Crow Get This Book
× 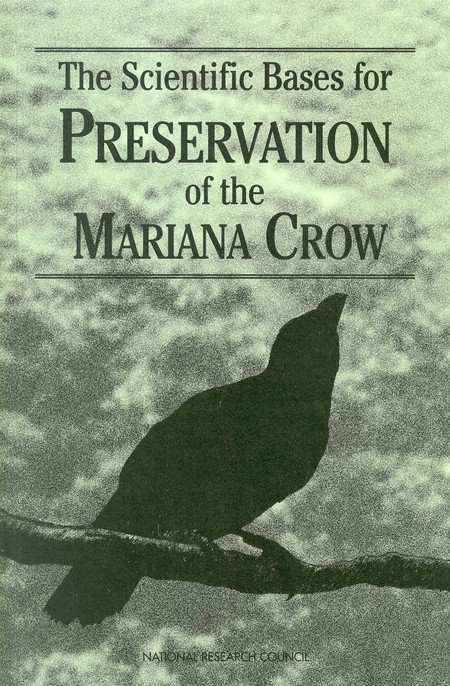 This book, while focusing on current preservation challenges posed by the Aga, or Mariana crow, also reflects the larger issues and challenges of biodiversity conservation in all oceanic island ecosystems. It evaluates causes for the continuing decline of the Aga, which exists on only the two southernmost islands in the Mariana archipelago, Guam and Rota, and reviews actions to halt or reverse the decrease.

This book reminds us of the importance and challenge of preserving the unique environmental heritage of islands of the Mariana archipelago, the need for increased knowledge to restore and maintain native species and habitats, and the compelling and lasting value of extensive public education to stimulate environmentally informed public policy development.