The Effects on the Atmosphere of a Major Nuclear Exchange (1985)

Visit NAP.edu/10766 to get more information about this book, to buy it in print, or to download it as a free PDF.
« Previous: 1 Summary and Conclusions
Page 10 Share Cite
Suggested Citation:"2 Recommendations for Research." National Research Council. 1985. The Effects on the Atmosphere of a Major Nuclear Exchange. Washington, DC: The National Academies Press. doi: 10.17226/540.
×

Recommendations for Research The uncertainties that impede an accurate quantification of the atmospheric degradation implied by a nuclear exchange are numerous and are large. Nevertheless, despite the limited understanding of these matters, it is clear that the hazard posed by a large nuclear exchange is of serious concern and deserves continuing attention. Accordingly, investigations should be initiated 1~_~;~: ~Ha ~an =·~ ~ to narrow the a., "~= "~" ~w ~`vv~ue crealole, quanclcatlve, and reasonably accurate estimates of the atmospheric modifications. To that end the committee makes the recommendations below. These recommendations are not intended to define precisely designed studies, but rather to indicate the general areas in which it appears that the uncertainties can most probably be narrowed. Because further uncertainties and even new causal mechanisms could emerge, research programs that address this problem should be flexible enough to accommodate changing scientific information needs. 1. Our ability to predict the climatic consequences of prescribed injections of smoke and dust into the atmosphere is not well developed at this time, but it can advance substantially in the next few years. Problems that deserve special emphasis are (a) the transport of smoke and dust by the atmosphere and the subsequent feedback effects of this transport on the circulation, (b) the lifetime of smoke particles in the perturbed atmosphere, (c) the transient response of the surface temperature and near-surface meteorology to fluctuating light levels on day to week time scales, (d) the regional influence of ocean-continent climate interaction, (e) the radiative, optical, and infrared properties of smoke aerosols and their evolution with time, and (f) the implications of changes ~ ~ in precipitation and cloud structure. One-dimensional radiative-convective climate models have proven very useful in the initial phase of study, but, except for problem (c), are severely limited in their ability to address these problems. Two-dimensional zonally symmetric circulation models can be used to study areas (a) and (b), but the limitations imposed by not easily validated parameterizations of large-scale atmospheric eddies must be kept in mind. Three-dimensional general circulation models (GCMs) could be used to address all of the problems above, although existing models are not properly designed for the task. The groups that have 10

11 such models should be encouraged to use their resources in an effort to decrease the current level of climate modeling uncertainty. Additional supporting research will be needed to improve the treatment of those processes in GCMs that influence aerosol lifetime and surface conditions. 2. There is a need to develop a better understanding of the following phenomena related to the fires induced by nuclear war: (a) the dynamics of large-scale fires, including fire spread, the effects of prompt water condensation, and the implications for smoke injection heights, optical properties, and removal rates; (b) inventories of urban fuels by type and density; (c) seasonal variations in, and areal extents of, wildland fuel burdens :(using existing surveys and Landsat data, for example); (d) the efficiency of ignition of both urban and natural fuel arrays by nuclear bursts; (e) the quantity, composition, and size distribution of smoke produced by different fuels in large-scale fires, and the extent of fine per ticulates other than smoke swept into fire plumes; (f) the microphysical processes that remove smoke particles from the atmosphere in the long term; and (g) the mesoscale transport and mixing of smoke, including the coupling of smoke heating and microphysics to dynamics and precipitation. These recommendations concerning fires and smoke are only generally spelled out, as it was not the objective of the committee to design specific research programs. However, it is worth emphasizing that a particularly important subject that is amenable to both experimental and theoretical study is the microphysical processing (by coagulation and water scavenging) of smoke particles in large fire plumes, and the implication for radiative properties of the smoke layer. Because of the complexity of the fire/smoke problem, research planning and management in this area should be carefully coordinated. 3. An important effect of nuclear war is radioactive fallout. This topic does not lie within the scope of the present study, and the committee has not addressed it; but the committee does believe that the radioactivity problem should be reexamined in appropriate detail. Earlier studies estimated that the globally averaged long-term radiation hazard would not be large. However, these studies depended on an analysis of strontium-90 fallout from atmospheric nuclear tests, which were dominated by multimegaton bursts that resulted in stratospheric injection of the radioactive debris, and thus avoided early rainout. Current arsenals comprise mainly submegaton warheads, which would inject a major share of their radioactivity into the mid-latitude troposphere. Thus widespread fallout and precipitation on intermediate time scales (days to weeks) might pose a more serious problem. New preliminary estimates suggest that low-yield scenarios significantly increase the globally averaged radiation hazard per megaton released (Knox, 1983; Turco et al., 1983~. 4. Although the committee's conclusions on dust seem well constrained, they are largely based on a small body of empirical data derived from nuclear tests that in some respects are imperfect analogs of 0.5- to 1.0-Mt continental surface bursts. The data come from either high-yield tests at the Pacific Proving Ground or from Johnie Boy, a very low yield, partially buried test in Nevada. More detailed

12 theoretical treatments (especially, detailed numerical simulations) of fireball mass loading (i.e., vaporized and melted rock and ejected, lofting, and recondensation processes that lead to the distribution of dust particles in the stabilized cloud estimates on a firmer footing. 5. With the exception of one study using a two-dimensional model, all of the published calculations of ozone decreases from nuclear explosions (including the present set) have come from one-dimensional models of chemistry and transport. Present-day scenarios of nuclear war involve the injection of nitrogen oxides in the lower stratosphere, where the chemical processes and the transport processes both have similar characteristic times. Suitable two- and three-dimensional models potentially can represent the ozone space-time variations more realistically than a one-dimensional model. The committee recommends the development and application of higher-dimensional models to this problem. Included in the work should be appropriate sensitivity tests and a degree of verification of the model. 6. Geologists and paleoclimatologists should make joint investigations on the local and global scales of the possible climatic effects of well-dated great volcanic explosions that have occurred in the past few million years. The errors in dating volcanic eruption products increase with increasing age: hence the youngest great volcanic explosions offer the best opportunity to correlate climate changes with particular explosions. Research is also needed to quantify adequately the character and amount of material injected into the atmosphere by large volcanic explosions. Recent work suggests that the occurrence of regional to global effects of meteorite impacts in the energy range 106 to 107 Mt may ~ Multidisciplinary investigations of identifiable events should be carried out to assess the effects of large impacts on climate and on the biology. final could put these be recognizable in marine and continental sediments REFERENCES Knox, J.B. (1983) Global scale deposition of radioactivity from a large scale exchange. Paper presented at the International Seminar on Nuclear War, 3rd Session: The Technical Basis for Peace. Ettore Majorana Centre for Scientific Culture, Erice, Sicily, August 19-24, 1983. Turco, R.P., O.B. Toon, T.P. Ackerman, J.B. Pollack, and C. Sagan (1983) Global Atmospheric Consequences of Nuclear War. Interim Report. Marina del Rey, Calif.: R&D Associates. 144 pp. 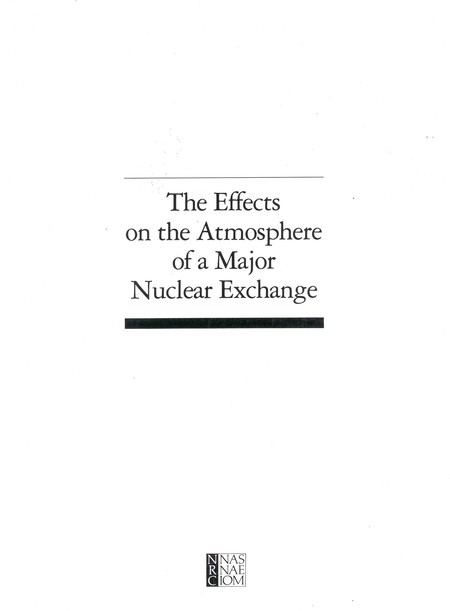 Most of the earth's population would survive the immediate horrors of a nuclear holocaust, but what long-term climatological changes would affect their ability to secure food and shelter? This sobering book considers the effects of fine dust from ground-level detonations, of smoke from widespread fires, and of chemicals released into the atmosphere. The authors use mathematical models of atmospheric processes and data from natural situations—e.g., volcanic eruptions and arctic haze—to draw their conclusions. This is the most detailed and comprehensive probe of the scientific evidence published to date.