Visit NAP.edu/10766 to get more information about this book, to buy it in print, or to download it as a free PDF.
Page i Share Cite
Suggested Citation:"FRONT MATTER." National Research Council. 1997. Environmentally Significant Consumption: Research Directions. Washington, DC: The National Academies Press. doi: 10.17226/5430.
×

Preface In scientific and political debates about the social causes of global change, blame for environmental degradation is often placed on the rapid growth in population numbers, particularly in the developing world. However, many social scientists have argued that per capita consumption in developed countries such as the United States is an equally serious cause of environmental degradation. The signing of international agree- ments to protect the atmosphere, such as the Framework Convention on Climate Change, has brought the analysis of consumption into the politi- cal arena. Developing countries have blamed northern consumption of fossil fuels for greenhouse gas emissions, and critics have pointed out that a child born in the United States will consume, on average, 10 times the resources and produce 10 times the pollution of a child born in Bangladesh or Bolivia. Late in 1994, the U.S. Environmental Protection Agency, recognizing the environmental importance of consumption and the need for scientific study of the issue, asked the National Research Council for help in defin- ing a research agenda on the global environmental impact of U.S. con- sumption. The National Research Councilâs Committee on the Human Dimensions of Global Change, which accepted the request, quickly real- ized that although a vast amount of potentially relevant research existed, the amount of empirical work focusing specifically on the environmental impacts of consumption and on the nature and causes of environmentally significant consumption was relatively small. We therefore decided that the most helpful approach would be to convene a small group of active researchers whose work would demonstrate a range of interesting and researchable scientific questions and who could help identify some prom- ising directions for future research. vii

viii PREFACE The committee held a workshop for this purpose in November 1995. The participants included researchers from government and universities. We were pleased that several international agencies and foundations ex- pressed interest in the topic and sent representatives to the workshop. A number of scholars were asked to prepare draft papers that were circu- lated in advance and discussed at the workshop. It was clear from the lively interactions at the workshop that there are a variety of promising conceptual approaches to the study of environmentally significant con- sumption and that future research must address the complex interactions of factors such as technology, economics, culture, public policy, and indi- vidual behavior. This volume includes brief versions of some papers from the workshop and summarizes some of the ideas raised there about research strategies and directions. The papers show that the nature and level of resource consumption in the United States is causing environ- mental change and that consumption is influenced by a wide range of institutions, individual preferences, technologies, and economic policies. Yet there is no consensus on how and why environmentally significant consumption changes. Much could be learned from further quantitative analyses and qualitative case studies of specific consumption activities. Such research could illuminate the anthropogenic causes of environmen- tal change and thus inform choices by government, the private sector, and individual citizens regarding ways to reduce the environmental impacts of consumption and to implement global environmental agreements. We hope that the publication of the results of this workshop will foster fur- ther discussion within the research and policy community and stimulate an expanded and fruitful research agenda on consumption as a factor in environmental and global change. On behalf of the National Research Council Committee on the Hu- man Dimensions of Global Environmental Change, I would like to thank Paul Stern, Thomas Dietz, Vernon Ruttan, Robert Socolow, and James Sweeney for organizing the workshop and editing this volume. I would also like to thank David Rejeski from the White House Office of Science and Technology Policy for suggesting such an interesting and challenging topic for a workshop. I also wish to thank Eugenia Grohman, Colene Walden, and Heather Schofield, all of whom provided essential help in editing and producing the volume, and Janine Bilyeu, without whose help with logistics and management the workshop would not have been so successful. Diana Liverman, Chair Committee on the Human Dimensions of Global Change

Next: 1 CONSUMPTION AS A PROBLEM FOR ENVIRONMENTAL SCIENCE »
Environmentally Significant Consumption: Research Directions Get This Book
× 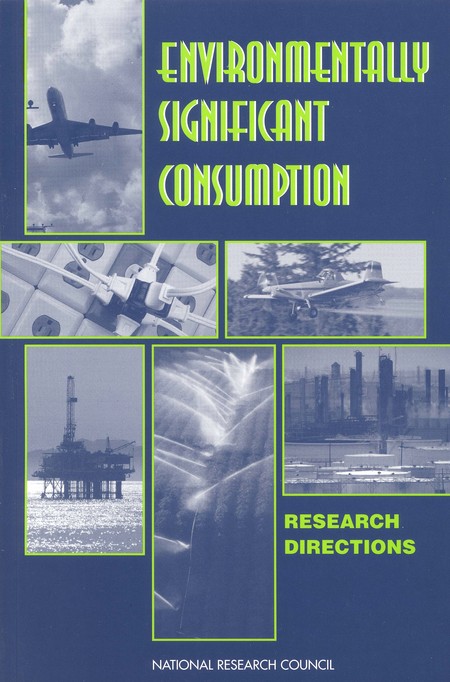 There has been much polemic about affluence, consumption, and the global environment. For some observers, "consumption" is at the root of global environmental threats: wealthy individuals and societies use far too much of the earth's resource base and should scale back their appetites to preserve the environment for future generations and allow a decent life for the rest of the world. Other observers see affluence as the way to escape environmental threats: economic development increases public pressure for environmental protection and makes capital available for environmentally benign technologies. The arguments are fed by conflicting beliefs, values, hopes, and fears—but surprisingly little scientific analysis.

This book demonstrates that the relationship of consumption to the environment needs careful analysis by environmental and social scientists and conveys some of the excitement of treating the issue scientifically. It poses the key empirical questions: Which kinds of consumption are environmentally significant? Which actors are responsible for that consumption? What forces cause or explain environmentally significant consumption? How can it be changed? The book presents studies that open up important issues for empirical study: Are there any signs of saturation in the demand for travel in wealthy countries? What is the relationship between environmental consumption and human well-being? To what extent do people in developing countries emulate American consumption styles? The book also suggests broad strategies that scientists and research sponsors can use to better inform future debates about the environment, development, and consumption.