Get This Book
Visit NAP.edu/10766 to get more information about this book, to buy it in print, or to download it as a free PDF.
« Previous: 7 Findings and Recommendations
Page 169 Share Cite
Suggested Citation:"A Biographical Sketches of Committee Members." National Research Council. 1997. Aviation Safety and Pilot Control: Understanding and Preventing Unfavorable Pilot-Vehicle Interactions. Washington, DC: The National Academies Press. doi: 10.17226/5469.
×

Duane T. McRuer (chair) is concurrently an independent consultant and chairman of Systems Technology, Incorporated (STI). He received his undergraduate and graduate education at the California Institute of Technology. Since 1950, Mr. McRuer's research has been focused on aerospace and ground vehicle and human pilot dynamics, automatic and manual vehicular control, and vehicle flying/handling qualities. He has published more than 125 technical papers and seven books, including Analysis of Nonlinear Control Systems (Wiley, 1961; Dover, 1971) and Aircraft Dynamics and Automatics Control (Princeton, 1973). He has also been involved with applications of these topics in more than 50 aerospace and land vehicles, and he has five patents on flight control and stability augmentation systems. Besides a career as president and technical director of STI (until 1993), he has been a Regent's Lecturer at the University of California, Santa Barbara, and was the 1992–1993 Hunsaker Professor at the Massachusetts Institute of Technology (MIT).

Mr. McRuer's past service for various governmental and professional societies includes terms as president of the American Automatic Control Council and chairman of the National Research Council Aeronautics and Space Engineering Board, the American Institute of Aeronautics and Astronautics (AIAA) Technical Committee on Guidance and Control, and the Society of Automotive Engineers (SAE) Aerospace Control and Guidance Systems Committee. He is currently on the National Aeronautics and Space Administration (NASA) Advisory Council. He is a fellow of the AIAA, Institute of Electrical and Electronic Engineers (IEEE), SAE, and the Human Factors and Ergonomics Society and a member of the National Academy of Engineering. Other honors include the Caltech Distinguished Alumni Award,

Carl S. Droste is the director of the Systems Integration Center of the Product Engineering Department at Lockheed Martin Tactical Aircraft Systems in Fort Worth, Texas. The Systems Integration Center is responsible for integrating flight control systems, among other things. Dr. Droste has worked at Lockheed Martin for more than 29 years. For more than 15 years, he was manager of the Flight Control Systems Section. Section activities spanned the full range of flight control system development, including functional responsibility for the F-111, the F-16, the AFTI/F-16, the F-16XL, the A-12, and the YF-22 programs. Dr. Droste received his undergraduate degrees from Rice University and his graduate degrees from Texas A & M University. He is a member of the IEEE and the SAE, where he serves on the Aerospace Control and Guidance Systems Committee.

R. John Hansman is a professor in the Department of Aeronautics and Astronautics at MIT, where he is head of the Humans and Automation Division. He also directs the MIT Aeronautical Systems Laboratory and the MIT International Center for Air Transportation. He has been a member of the faculty since receiving an interdisciplinary Ph.D. in physics, meteorology, electrical engineering, and aeronautical engineering from MIT in 1982. Since 1980, Dr. Hansman's research has been focused on a broad range of flight safety topics, ranging from aviation weather hazards, such as icing and windshear, to instrumentation and pilot-vehicle interface issues. He is the author of more than 90 technical papers in these areas and holds five patents. He is the recipient of the AIAA Losey Atmospheric Sciences Award for his work on the mitigation of aviation weather hazards. He has also received the Presidential Young Investigator Award and the OSTIV (Organisation Scientifique et Technique Internationale du Vol a Voile) Diploma. Dr. Hansman has more than 4,600 hours of flight experience in airplanes, helicopters, and sailplanes. He is an associate editor of the Journal of Aircraft and the Air Traffic Control Quarterly.

Dr. Hansman is an associate fellow of the AIAA and a former director of the Soaring Society of America. He is also a member of the Human Factors Society, Phi Beta Kappa, Sigma Xi, and the American Physical Society. He has served on numerous advisory and technical committees, including the Congressional Aeronautical Advisory Committee, the AIAA Atmospheric Environment Technical Committee, and the Federal Aviation Administration Research and Development Subcommittee on the National Airspace System.

Ronald A. Hess is a professor in the Department of Mechanical and Aeronautical Engineering at the University of California, Davis (UCD). He has been a member of the UCD faculty since 1982. Prior to his current academic position, Dr. Hess was a research scientist at NASA Ames Research Center, where he conducted research in the flight control and handling qualities of vertical and short takeoff and landing aircraft and rotorcraft. He is an associate fellow of the AIAA, a senior member of the IEEE, and a member of the American Helicopter Society. Dr. Hess is an associate editor of the Journal of Aircraft and the IEEE Transactions on Systems, Man, and Cybernetics. He is also a registered professional engineer in the state of California.

David P. LeMaster is chief of the Flight Control Division, Flight Dynamics Directorate, Wright Laboratory, at Wright-Patterson Air Force Base, Ohio. In this position since January 1993, Mr. LeMaster has led Air Force flight control and pilot-vehicle interface technology development for fixed-wing military flight vehicles. From 1988 to 1993, he was chief, Flight Technology Division, Flight Systems Engineering Directorate, Aeronautical Systems Center, responsible for aerodynamic and flight control system development and acquisition for aeronautical weapons systems. Between 1984 and 1988, Mr. LeMaster was director of engineering, F-16 System Program Office, Aeronautical Systems Center. In this position, he was responsible for all engineering support for F-16 block 10 and 25 configurations in the operational fleet, development and production of the F-16 block 30 and 40 configurations, and advanced development planning for the F-16 block 50 configuration. Earlier in his career, Mr. LeMaster received a Master of Science degree in the management of technology from MIT.

Stuart Matthews is chairman, president, and chief executive officer of the Flight Safety Foundation, a long-established international nonprofit organization that acts as an independent industry think tank on aviation safety. Born in London, England, Mr. Matthews has more than 43 years of aviation industry experience. He spent 15 years in the British manufacturing industry as an advanced project design engineer and in other positions, including a period working on the Concorde program. This was followed by seven years with British Caledonian Airways, where he was responsible for corporate and fleet planning. In 1974, he was invited by Fokker Aircraft in the Netherlands to establish a U.S. subsidiary company based in Washington, D.C. As president of Fokker USA, for the next 20 years Mr. Matthews looked after all of the company's business and marketing activities in North America, placing some 300 aircraft in the process. He was elected chairman of the Flight Safety Foundation in 1989 and, when he retired from Fokker in 1994, he was also appointed president and chief executive officer. Mr. Matthews is a chartered

engineer, a fellow of the Royal Aeronautical Society, a fellow of the Chartered Institute of Transport, and an associate fellow of the AIAA. Upon his retirement from Fokker, he was knighted by the Queen of the Netherlands for his services to aviation.

John D. (Jack) McDonnell is director of vehicle management systems at McDonnell Douglas Corporation. He has been with McDonnell Douglas for 28 years, working on the design, development, testing, and certification of the DC-10 and MD-80 and managing the research and development of advanced flight control systems, avionics, and cockpit designs. Previously, Mr. McDonnell spent 10 years at STI working on analytical pilot models, pilot rating scales, and a variety of flight-control-related systems, such as approach power compensators, and Fresnel landing system stabilization strategies. He has B.S. and M.S. degrees in engineering from the University of California—Los Angeles. He is a member of Tau Beta Pi, the SAE Aerospace Control and Guidance Systems Committee, and NASA's Aeronautics Research and Technology Subcommittee on Guidance and Control.

James McWha is chief engineer of flight systems at Boeing Commercial Airplane Group, where he is responsible for all flight deck and flight controls activities. He has been with Boeing for 30 years, having worked on each of the current production airplanes. He was chief engineer for flight controls throughout development of the 777, Boeing's first fully fly-by-wire commercial airplane. Prior to Boeing, Mr. McWha worked for Short Brothers in Northern Ireland for four years after graduation from Queen's University, Belfast. Mr. McWha is a member of the AIAA, vice chairman of one of the SAE control and guidance subcommittees, and a member of the Flight Controls and Guidance Panel of NASA's Aeronautics Research and Technology Subcommittee.

William W. Melvin has a B.S. degree in mechanical engineering from the University of Texas. He was a patrol plane commander and transport plane commander in the U.S. Navy and retired from Delta Air Lines as a captain after 33 years of service. He was active in air safety with the Air Line Pilots Association (ALPA), serving as chairman of the Airworthiness and Performance Committee. He is the author and co-author of numerous articles and technical papers on aircraft performance. He has served on many industry committees, including the National Research Council Committee on Wind Shear in 1982, and has been a consultant to the Aero-Astronautics Group of Rice University and the National Institute of Standards Technology. Mr. Melvin is the recipient of a Flight Safety Foundation Award (1976), ALPA Annual Air Safety Award (1977), ALPA Air Safety Outstanding Service Award (1981), International Federation of Air Line Pilots Associations

(IFALPA) Scroll of Merit (1986), Aviation Week and Space Technology/Flight Safety Foundation Award (1993) and IFALPA Clarence N. Sayen Award (1994). He is co-recipient, with Dr. Angelo Miele and Dr. Tong Wang, of the O. Hugo Schuck award from the American Controls Conference (1989) for the best paper of 1988.

Richard W. Pew is principal scientist and manager of the Cognitive Sciences and Systems Department at BBN Corporation in Cambridge Massachusetts. Dr. Pew has 35 years of experience in human factors, human performance, and experimental psychology as they relate to systems design and development. He spent 11 years on the faculty of the Psychology Department at the University of Michigan where he was involved in teaching, research, and consulting before he moved to BBN in 1974. Throughout his career, Dr. Pew has been involved in the development and utilization of human performance models and in the conduct of experimental and field studies of human performance in applied settings. Dr. Pew was the first chairman of the National Research Council Committee on Human Factors. He has also been president of the Human Factors Society, chairman of the Biosciences Panel of the Air Force Scientific Advisory Board, and president of Division 21 of the American Psychological Association, the division concerned with engineering psychology.

Next: B Participants in Committee Meetings »
Aviation Safety and Pilot Control: Understanding and Preventing Unfavorable Pilot-Vehicle Interactions Get This Book
× 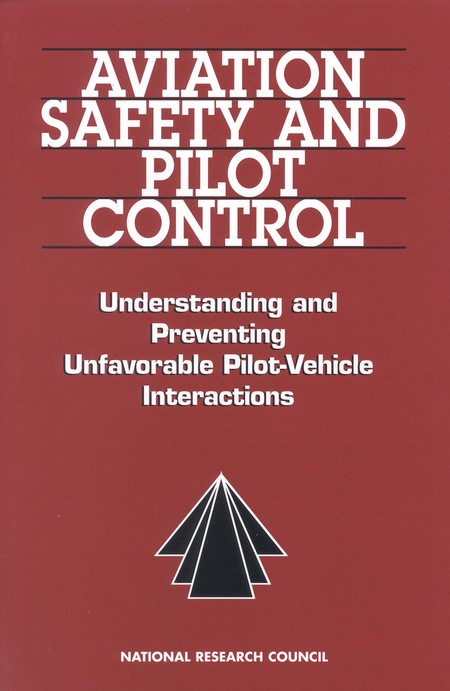