Chapter:2. Ultraviolet, Optical, and Infrared Astronomy I. Summary and Recommendations

Visit NAP.edu/10766 to get more information about this book, to buy it in print, or to download it as a free PDF.
« Previous: X. Gravitational-Wave Astronomy
Page 98 Share Cite
Suggested Citation:"2. Ultraviolet, Optical, and Infrared Astronomy I. Summary and Recommendations." National Research Council. 1983. Astronomy and Astrophysics for the 1980's, Volume 2: Reports of the Panels. Washington, DC: The National Academies Press. doi: 10.17226/550.
×

Ultraviolet, Optical, and Infrared Astronomy I. SUMMARY AND RECOMMENDATIONS The program of ultraviolet, optical, and infrared (W OIR) astronomy for the 1980's involves a great diversity of astronomical objectives and means for attaining them. Some facilities are already well established, others are just coming into operation, some are now planned for construction, and still others are new initiatives for the coming decade. In this section, we present the major recommendations of highest priority, call attention to those ongoing and planned programs that are fundamental to the W OIR science program for the 1980's, and summa- rize the scientific achievements and opportunities that have led us to these recommendations. A. Recommendations for Major Initiatives We recommend: 1. A program to increase dramatically the angular resolution and light-gathering capability of ground-based astronomy through the construction in this decade of a national New Technology Telescope (NTT) of the 15-m class for optical and infrared observations at an excellent site. We also recommend the construction at good sites 98

99 of several smaller national telescopes with apertures between 2.5 and 5 m that exploit new cost-saving tech- niques and the allocation of matching federal funds to encourage the construction of state and private tele- scopes. The astronomy of the 1980's will urgently require us to extend and augment our capabilities for spectroscopy, photometry, and imaging in the wavelength region between 0.3 and 30 Em. 2. A program leading to the construction of a Large Deployable Reflector (LDR) of the 10-m class for observa- tions in the far-infrared and submillimeter spectral regions from space, with construction starting in the late 1980's. m is facility will provide diffraction- limited spatial resolution and high spectral resolution in the 30-1000-pm range, where the Earth's atmosphere is opaque. These capabilities are crucial for detailed investigation of star-forming regions and energetic extragalactic sources. 3. The deployment of a far-ultraviolet spectrograph in space. This facility, incorporating a telescope in the 1-m class, will provide high spectral resolution in the wavelength region 900-1200 A, with possible exten- sion down to a few hundred angstroms. For technical reasons these wavelength regions are inaccessible to Space Telescope (ST) and the International Ultraviolet Explorer (IUE) satellite but are important for probing high-temperature regions of the interstellar medium, galactic halos, and the outer atmospheres of stars. 4. A free-flying Advanced Solar Observatory (ASO) in space. This facility, launched in time to study the 1991 solar maximum, would provide the necessary time baseline for detailed observations with very high spatial resolu- tion of the evolution of active regions on the Sun, in- cluding the development of flares, over spectral regions ranging from the optical and ultraviolet to x-ray and gamma-ray wavelengths. 5. m e development and utilization of advanced detector systems and instruments throughout the W OIR region. Efficient instrumentation and detectors are essential to the realization of the full potential of all existing and future W OIR facilities. In particular, the technology is ripe for the introduction of area detectors that will achieve very high two-dimensional spatial resolution in the infrared region when used with a very large telescope. Funding for two-dimensional photon- counting devices and charge-coupled devices (CCD's) should also be made available.

100 The above recommendations are for major new elements in a large set of programs--some ongoing, some soon to be implemented, and others still in the conceptual stage--all of which will be fundamental elements of WOIR astronomy for the 1980's. The broad W OIR science program requires the full and effective use of existing ground-based, air- borne, balloon, and space facilities. Effective use of the major planned and recommended facilities will also require the successful completion of sensitive all-sky surveys in several infrared wavelength bands, in the space ultraviolet, and in the optical region (through extension of previous ground-based optical surveys). It is also critical to the health of the science that the following National Aeronautics and Space Administra- tion (NASA) programs, which are already planned, be implemented: . Space Telescope (ST), which will provide unrivaled spatial resolution and sensitivity over an extensive wave- length range. The development and support of a healthy, vigorous, and independent Space Telescope Science Insti- tute (STScI) to operate ST is critical to ensuring maxi- mum scientific return from this facility. The periodic refurbishment and reinstrumentation of ST are also vitally important. · Shuttle Infrared Telescope Facility (SIRTF), a cryogenically cooled infrared telescope that will be an extremely powerful photometric and moderate-resolution spectroscopic tool for use in the 3-1000-pm region. The development of advanced instrumentation, together with adequate flight frequency and duration are essential in order to realize the full scientific potential of SIRTF. . Solar Optical Telescope (SOT), a Shuttleborne telescope that will provide the capability to study solar structures and their evolution, the dynamics of active regions, and solar magnetic fields with significantly higher spatial resolution than previously possible. The Panel furthermore wishes to underscore its belief that various sources of new federal funds are critically needed for operation of ground-based optical observa- tories. Fully effective use of many major facilities, which represent major capital investments, is now pre- cluded by inadequate support. In several cases, private and state support alone is no longer sufficient for optimum operation.

101 In addition, we recognize the great value of the Explorer series of NASA satellites for all facets of the W OIR effort and urge the significant augmentation of this successful program to offset the corrosive effects of inflation. In particular, we support the Infrared Astronomy Satellite (IRAS) Explorer, the Cosmic Back- ground Explorer (COBE), and the Extreme W Explorer (E WE) missions; we endorse the Solar Coronal Explorer to study acceleration processes in the solar wind; and we endorse the Solar Dynamics Explorer, which will provide an oppor- tunity to measure solar internal structure and dynamics. The Kuiper Airborne Observatory is, and the Spacelab payload program promises to become, extremely successful scientifically. Both programs should be augmented sig- nificantly. There is, in addition, a clear need for a variety of specialized telescopes and facilities. For example, the Panel notes the great scientific potential of optical/infrared interferometry. There is also an urgent need for dedicated astrometric and infrared tele- scopes in the southern hemisphere; furthermore the astro- metric community urgently requires additional computer- controlled measuring machines to make optimum use of existing and new-plate material. Finally, many of the exciting discoveries made by the deep-space planetary probes of the 1970's could be extended and better under- stood if a 1-m-class imaging and spectroscopic telescope were placed in near-Earth orbit and dedicated to planetary observations. B. Scientific Achievements and Opportunities The past decade has witnessed a series of discoveries that have fundamentally altered our understanding of the Universe. The x-ray satellites launched during the 1970's discovered a number of binary-star systems that contain neutron stars or perhaps even black holes. The strange Galactic source SS 433 appears to be ejecting matter at velocities equal to nearly 30 percent of the velocity of light. X-ray and radio observations have revealed evidence of gas between the galaxies in clusters of galaxies. Radio observations, and deep optical photographs using modern emulsions, have detected faint luminous material lying far outside the normal optical images of a number of galaxies. Studies of the Sun have revealed unexpected periodic oscillations and have begun to uncover the roles played by magnetic fields in con-

102 trolling astrophysical plasmas. We are also beginning to suspect that the Sun may undergo quasi-periodic changes with a time scale of centuries. Planetary probes have uncovered phenomena such as volcanoes on To and atmo- spheric circulation on Jupiter that could yield important geologic and atmospheric information if studied system- atically from near-Earth orbit. Despite the remarkable advances of the past decade, however, many of the most significant questions confronting astronomy today remain unanswered. Astronomers have only begun to glimpse how the Milky Way and other types of galaxies may have appeared at earlier times. Evolution of some galactic types may progress much more rapidly than has been believed. De- spite our most intensive efforts throughout the 1970's, the age of our Universe and its distance scale remain uncertain by at least a factor of 2. Determination of the geometry, scale, and evolutionary fate of the Uni- verse and its components remains a major challenge to astronomers during the 1980's. X-ray, optical/infrared, and radio studies have all revealed the ubiquity and variety of energetic phenomena in galactic nuclei. Quasars, Seyfert galaxies, and BL Lac objects, as well as less spectacular systems, all seem to contain enormous energy sources that are not understood. Many astronomers believe that this galactic nuclear activity owes its origin to the accretion of matter by supermassive objects ~ _ (black holes?). It is still uncertain whether new physics or more conventional ideas, such as "explosions" of star formation, are required to explain these phenomena. Much effort in the 1980's will be devoted to the study and interpretation of active galactic nuclei. Accretion of matter can also play a significant role in affecting the evolution and physical state of indi- vidual stars under special conditions. Accretion of material onto dense objects such as white dwarfs, neutron stars, and black holes may be the only signature of these unseen bodies. ~ Accretion also accounts for the spectacu- lar outbursts of novae. Physical models of accretion under various conditions are primitive and await guidance from new observations. Astronomers were surprised to learn in the 1970's that much of the interstellar medium in our Galaxy apparently consists of hot gas at temperatures of about 1 million degrees. It is not yet known how much material is in the form of hot gas, how it is heated, or how it affects the

Next: II. Highlights of Astronomy in the 1970 »
Astronomy and Astrophysics for the 1980's, Volume 2: Reports of the Panels Get This Book
× 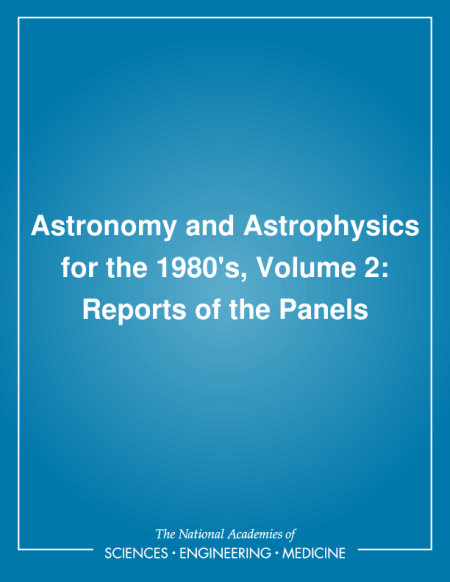