Bits of Power: Issues in Global Access to Scientific Data (1997)

Get This Book
Visit NAP.edu/10766 to get more information about this book, to buy it in print, or to download it as a free PDF.
Page i Share Cite
Suggested Citation:"Front Matter." National Research Council. 1997. Bits of Power: Issues in Global Access to Scientific Data. Washington, DC: The National Academies Press. doi: 10.17226/5504.
×

Committee on Issues in the Transborder Flow of Scientific Data

Bits of Power: Issues in Global Access to Scientific Data is available from the

COMMITTEE ON ISSUES IN THE TRANSBORDER FLOW OF SCIENTIFIC DATA

Marine Biological Laboratory (through May 1996)

Association of Universities for Research in Astronomy

The National Research Council was established by the National Academy of Sciences in 1916 to associate the broad community of science and technology with the Academy's purposes of furthering knowledge and advising the federal government. Functioning in accordance with general policies determined by the Academy, the Council has become the principal operating agency of both the National Academy of Sciences and the National Academy of Engineering in providing services to the government, the public, and the scientific and engineering communities. The Council is administered jointly by both Academies and the Institute of Medicine. Dr. Bruce Alberts and Dr. William A. Wulf are chairman and vice chairman, respectively, of the National Research Council.

Science is perhaps the most truly international of human enterprises, not because it is based on cooperation among nations but rather because its practitioners collaborate and compete in an endeavor in which nationality tends to be irrelevant. Since Galileo corresponded with Kepler and Leeuwenhoek sent his observations to the Royal Society in London, the internationalization of science has grown steadily, with post-World War II travel and fellowship support, growing numbers of opportunities for academic exchanges, and, most recently, electronic information exchange and the end of the Cold War. Financial support for science, especially by governments, has been crucial in enabling this international interchange.

At the same time, such support has made possible a manifold expansion of science, in numbers of scientists, institutions, and publications. The amount of scientific data has grown both because there are more scientists and because with technological advances, each of them can produce more data than ever before.

But as new technologies and working styles rapidly supersede older ones, altogether new problems are appearing that affect how data are handled and used. Some of these are technical; others are directly related to the substance of the science itself. Still others involve legal, economic, and social dilemmas that arise when the work of scientists is integrated into the daily life of the larger society. One such issue that is particularly important for science concerns the exchange of scientific data, especially exchange across national boundaries. Factors affecting exchange of data in the natural sciences, and the significance of important changes affecting access to data, are the central topic of this report.

In 1994 the U.S. National Committee for the Committee on Data for Science

and Technology (CODATA),1 organized under the Commission on Physical Sciences, Mathematics, and Applications of the National Research Council, established the Committee on Issues in the Transborder Flow of Scientific Data to investigate the changing environment for the international exchange of scientific data in the natural sciences. The results of the study committee's deliberations constitute the substance of this report. Its aim is to examine the current state of global access to scientific data, to identify strengths, problems, and challenges that exist today or appear likely to arise in the next few years, and to recommend actions to build on those strengths and ameliorate or avoid those problems. The focus is on data in the natural sciences, because that is the primary subject-matter purview of CODATA, but this should not be interpreted as implying that the committee considers engineering or social science data to be less important. Although many of the issues identified in this study pertain to those other discipline domains as well, they involve different contexts and problems that require additional study.

The committee included practicing scientists who both contribute to and use the data resources needed in international scientific efforts, computer scientists and engineers who create and maintain the means for such exchange, economists who interpret how the scientific enterprise sustains itself in the larger society, and lawyers who specialize in scientific data problems. Learning to talk with each other and to understand different perspectives was a necessary step toward reaching some agreement on important issues and crafting recommendations to address them. In all of these efforts, the focus was on understanding how to ensure global access to the data required to conduct basic research in the natural sciences. The committee's specific recommendations are presented in the relevant sections of the main text and are listed together in the summary that begins this report.

Committee on Issues in the Transborder Flow of Scientific Data

The study committee is very grateful to the many individuals who played a significant role in the completion of this study. The committee held its first meeting on January 20-22, 1995, and extends its thanks to the following individuals who provided briefings and other information from the study's sponsoring agencies: Gerald Barton and Christopher Miller of the National Oceanic and Atmospheric Administration; William Blanpied of the National Science Foundation; Joseph Bredekamp of the National Aeronautics and Space Administration; Kurt Molholm of the Defense Technical Information Center; John Rumble of the National Institute of Standards and Technology; and Elliot Siegel of the National Library of Medicine. At this meeting, the committee also received background briefings from other federal agency representatives, including Gesina C. (Cynthia) Carter, Wanda Farrell, and Jay Snoddy of the Department of Energy; Paul Kanciruk of the Oak Ridge National Laboratory; and Dorothy Bergamaschi of the Department of State.

The committee also extends its thanks to the issue area experts who briefed the committee at its September 22-24, 1995, meeting: Gershon Sher of the National Science Foundation, Gregory van der Vink of the Incorporated Research Institutions for Seismology, Carlos Gamboa of the Pan American Health Organization, Amy Gimble of the American Association for the Advancement of Science, and Lane Smith of the U.S. Agency for International Development participated in a roundtable discussion of data access issues in less developed countries; Hal Varian of the University of California at Berkeley discussed economic aspects of data transfer on the Internet; John Baumgarten of Proskauer, Rose, Goetz, and Mendelsohn, Mary Levering of the Library of Congress, Ed-

ward Malloy of the State Department, Pamela Samuelson of the University of California at Berkeley, and Peter Weiss of the Office of Management and Budget participated in a discussion concerning intellectual property issues; and Richard Greenfield of the National Science Foundation provided an update of the World Meteorological Organization's data exchange policy.

The committee is very appreciative, as well, of the contributions of the more than 200 individuals who responded to the committee's "Inquiry to Interested Parties" (see Appendix D of this report)1 and of the many data experts who responded to specific requests for information used in the body of the report. In addition, the committee would like to express its gratitude to the members of the U.S. National Committee for CODATA, who provided oversight of this study, and the following ex officio members, who provided liaison with other relevant activities: David R. Lide, Jr., consultant and chair of the U.S. National Committee for CODATA; Francis Bretherton, of the University of Wisconsin, chair of the National Research Council's Committee on Geophysical and Environmental Data; and Ferris Webster, of the University of Delaware, chair of the CODATA Working Group on Data Access. The committee also wishes to acknowledge the assistance of Anne Linn, director of the Committee on Geophysical and Environmental Data, and Wendy White, director of the Committee on International Organizations and Programs.

Finally, the committee would like to recognize the invaluable contributions of the National Research Council staff without whom this report could not have been completed: Paul F. Uhlir, associate executive director of the Commission on Physical Sciences, Mathematics, and Applications, who served as study director; Julie M. Esanu, for the program and research assistance provided to the committee; David Baskin and Alexandra Spaith for the staff support to the committee; and editorial consultant Roseanne Price, who edited the final manuscript.

This study is dedicated in fond memory of Gesina C. (Cynthia) Carter, director of the U.S. National Committee for CODATA from 1978 to 1991.

Next: Summary »
Bits of Power: Issues in Global Access to Scientific Data Get This Book
× 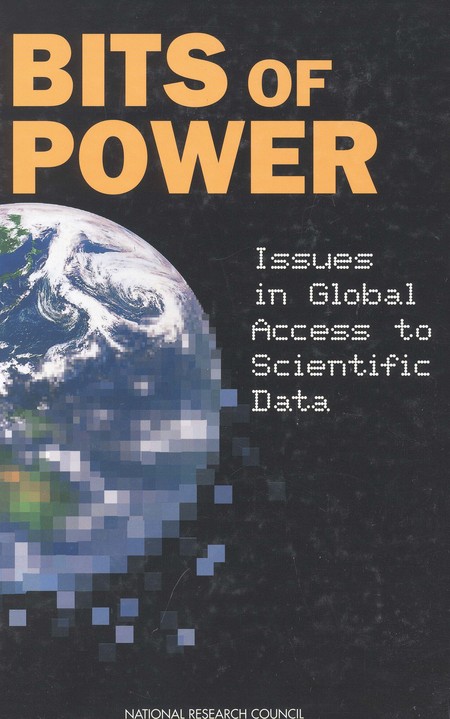 Since Galileo corresponded with Kepler, the community of scientists has become increasingly international. A DNA sequence is as significant to a researcher in Novosibirsk as it is to one in Pasadena. And with the advent of electronic communications technology, these experts can share information within minutes. What are the consequences when more bits of scientific data cross more national borders and do it more swiftly than ever before? Bits of Power assesses the state of international exchange of data in the natural sciences, identifying strengths, weaknesses, and challenges. The committee makes recommendations about access to scientific data derived from public funding. The volume examines:

Bits of Power explores how these issues have been addressed in the European Community and includes examples of successful data transfer activities in the natural sciences. The book will be of interest to scientists and scientific data managers, as well as intellectual property rights attorneys, legislators, government agencies, and international organizations concerned about the electronic flow of scientific data.