Interactions of Drugs, Biologics, and Chemicals in U.S. Military Forces (1996)

Get This Book
Visit NAP.edu/10766 to get more information about this book, to buy it in print, or to download it as a free PDF.
« Previous: 1: INTRODUCTION
Page 14 Share Cite
Suggested Citation:"2: CURRENT PROPHYLACTIC AGENTS." Institute of Medicine. 1996. Interactions of Drugs, Biologics, and Chemicals in U.S. Military Forces. Washington, DC: The National Academies Press. doi: 10.17226/5515.
×

In the course of a career in the military, personnel are exposed to a variety of biologics, drugs, and chemicals. These include vaccines to stimulate immunologic protection against natural and biological warfare infectious disease threats, chemoprophylactic drugs against infectious diseases and chemical warfare agents, and skin repellents or uniform-impregnating agents for protection against insect vectors. Troops are also exposed occupationally to myriad environmental agents. In addition, individuals will inevitably be using a variety of prescribed and over-the-counter medications. The remainder of this chapter describes military use of preventive or prophylactic agents, those subject to direct military decision-making and provision.

The list of vaccines and other prophylactic agents used by the military is constantly changing. As new agents become available, their efficacies are determined and evidence of their disease risk is established. Preventive medicine guidelines used by the military, including medical guidelines for travel, are similar to those developed for the civilian sector (such as the Centers for Disease Control and Prevention and the Advisory Committee on Immunization Practices), with modifications dictated by the peculiarities of the military environment. The military depends heavily on a group of civilian medical consultants, the Armed Forces Epidemiological Board, which has been advising the medical leadership of the U.S. Department of Defense (DoD) since World War II.

Some differences in policy exist between services because of different disease experiences or because of different operational requirements (Table 2-1). For example, adenovirus vaccine is given to all male Army, Navy, and Marine recruits, but it is not given to Air Force or Coast Guard recruits, because it is not considered a serious threat in the Air Force or Coast Guard. Similarly, because early overseas deployment is highly likely for Navy and Marine Corps personnel, they are given typhoid vaccine and yellow fever vaccine during recruit training and every 3 years and 10 years thereafter, respectively.

The list of agents added to the routine preventive series described above is dependent on the deployment scenario: the climate, the state of socioeconomic development of the nation(s) to which troops will be deployed, the known or suspected natural disease threats, and the existence of biological or chemical warfare agents. The members of some alert units (ready to be deployed) receive a number of the vaccines listed below to maintain immunity, because they are at continuous risk of rapid deployment to areas of increased disease threat. The following list, which is not necessarily exhaustive, represents examples of some agents currently used (including investigational new drugs [INDs]).

Injectable cholera vaccine is available to the military, but it is given exclusively to those personnel going to countries whose health authorities require cholera immunization for entry. See section below on IND vaccines for comments on oral cholera vaccine.

Agents Used in Climates Where Tick-Borne Diseases Have Been Identified

Next: 3: SURVEILLANCE TOOLS CURRENTLY AVAILABLE TO THE MILITARY »
Interactions of Drugs, Biologics, and Chemicals in U.S. Military Forces Get This Book
× 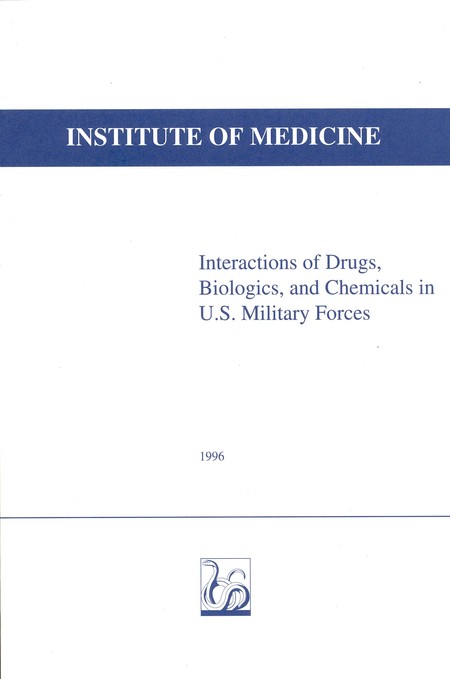