Development During Middle Childhood: The Years From Six to Twelve (1984)

Visit NAP.edu/10766 to get more information about this book, to buy it in print, or to download it as a free PDF.
Page i Share Cite
Suggested Citation:"Front Matter." National Research Council. 1984. Development During Middle Childhood: The Years From Six to Twelve. Washington, DC: The National Academies Press. doi: 10.17226/56.
×

Preface Tn 1981 at the request of the W. T. Grant Foundation, the Committee ~ on Child Development Research and Public Policy established the Pane! to Review the Status of Basic Research on School-Age Children. The Grant Foundation's primary interest was to identify new and promising directions for basic research on human development during the early elementary years. Believing that development during the 6-12 age period has received less attention from the research community than the periods of infancy, the preschool years, and adolescence, the Foundation designated middle child' hood health and development as a new priority for research support. To aid in its program planning efforts, the pane! was asked ~ ~ ~ to identify significant aspects of social, emotional, cognitive, and physical development during this age period; (2) to review the current status of relevant basic research; (3) to highlight theoretical and methodological issues associated with the research; and (4) to suggest useful directions for future inquiry. It was not the specific intention of our sponsors nor of the members of the committee that the pane! should produce a traditional, comprehensive state-of~the~art review of all relevant research. The hope was that the report would reflect a degree of selectivity in the subtopics addressed, in the existing studies discussed, and in the types of future inquiry highlighted. We also hoped that the report would reflect the interdisciplinary process of review and synthesis that has become a hallmark of National Research Council studies. Reviews of research on chilc! development have typically focused on the contributions of developmental psychology to understanding the IX or,

x PREFACE nature of personal behavior and interactions, thought processes, and physical and emotional well-being at different ages. The panel's study was intended to integrate knowledge concerning these aspects of human development with a broader understanding of their relationship to the physical, social, cultural, and institutional factors that affect growth and behavior during middle childhood and that influence the longer-term progress of children following different developmental trajectories. In this way, the panel's study relied not only on the contributions of several specialized fields within de- velopmental psychology but also on the contributions of clinical psychology, psychiatry, sociology, anthropology, education, and pediatrics. As a starting point for the study, the members of the Committee on Child Development Research and Public Policy, along with W. Andrew Collins, the pane! chair, designated significant aspects of development and factors affecting development in the 6-12 period to be addressed in the report: · cognitive development, including reaming processes, coordination and integration of knowledge acquisition, and planning functions; · development of social concepts and skills, including children's under- standing of social situations and events and appropriate behaviors as well as social concepts such as responsibility, intention, cooperation, and compe . . tltlon; · development of concepts of self and social relations, including devel- opmental changes in and environmental influences on self-concept, self- esteem, friendship, love, and loyalty; · parent and family relations, including changes in interfamilial and ex- trafamilial relationships and interactions; · peer relations, including the selection of friends, the formation of friend- ships, and the system of personal associations and relationships that develops among children in school and in other extrafamilial settings; · social and cultural factors affecting development, including the influence of various social institutions such as the media, religious affiliations, and other formal and informal community organizations outside the family; · educational/school factors affecting development, including the influ- ence of curricular and extracurricular activities, school environment, and school structures as these interact with other dimensions of children's daily experiences; · achievement and motivational factors affecting development, including emotion, motivation, and individual adaptation as they influence cognitive and social development as well as self~concept, self-esteem, and the range of social relations; · deviance and psychopathology, including the range of problem behaviors and adjustments, ego processes, coping behaviors, and reactions to stress

PREFACE Xl that occur in this age group as well as the antecedents in middle childhood of later deviant functioning; and · health and physical growth, including the range of physical and phys- iological conditions and changes that occur during middle childhood and that influence social, emotional, and cognitive growth and development. It is important to note the high degree of interrelation, and to some extent overlap, among these topical headings, which constituted the organizing framework for the study. In some cases they became the subjects of chapters of the report; in other cases they were addressed in the discussion in one or more chapters. With regard to each of these topics, however, special atten' tion was given to the methodological problems of studying school-age chits dren-for example, the settings in which they are available for study and the measurement of their skills and abilities as well as their potential reactions to many commonly used measurement procedures. Special attention was also given to the strength of the relevant theoretical underpinnings and to the extent of the empirical knowledge base. While these methodological problems exist, the pane! found reasons for optimism about the potential for new knowledge. Equally important, the report lends credence to the hypothesis that there are important research issues to be pursued with regard to the development of 6' to 12-year-olds. ~ be panel members were selected tor their expertise in these areas and for their willingness to undertake major responsibility for drafting the review chapters. Each member of the pane! served as an author of this report and each as a critical sounding board for the written contributions of his or her colleagues. Moreover, each member contributed in a concrete way to the analytic and synthetic processes that yielded the insights about theoretical, empirical, and methodological issues that are the end result of this effort. Over the two~and~a~half~year course of the study, the pane! met five times to conceptualize the relevant research issues, to review and critique the chapter drafts, and to develop the conclusions and recommendations that are presented throughout this report. This report is truly a product of the special commitment and hard work of the members of the pane! themselves. William A. Morrill, Chair Committee on Child Development Research and Public Policy

Acknowledgments Special acknowledgment is due to W. Andrew Collins, who served as pane! chair, editor of the report, and the author of the introductory and concluding chapters. His commitment of time, energy, and intellectual resources over the past two-and-a-half years has been extraordinary. Without him, this report would not have been possible. Further acknowledgment is due to members of the staff of the Committee on Child Development Research and Public Policy for their contributions to the successful completion of the study. Cheryl D. Hayes, in her capacity as executive officer for the Committee on Child Development Research and Public Policy, assisted in the establishment of the panel, provided admin- istrative direction and oversight throughout the study, and maintained li- aison between the panel, the parent committee, the Commission on Behavioral and Social Sciences and Education, and the W. T. Grant Foundation. Kirby A. Heller served on a part-time basis as study director and played an im- portant role in coordinating the work of the authors and the external review of the chapter drafts as well as assisting in drafting the introductory chapter. Susan Golf Timmer and S. Wayne Duncan were especially helpful in com- piling the demographic information presented in the introductory chapter. Christine L. McShane, editor for the commission, edited the manuscript with a critical eye and managed the final production of the report. Marjorie B. Dahlin, staff member of the Committee on Child Development Research and Public Policy, assumed major responsibility for manuscript preparation and proofreading. . . . Ill

xiv DEVELOPMENT DURING MIDDLE CHILDHOOD ~ would also like to acknowledge the special contribution of the numerous reviewers of the report. Several members of the Committee on Child De- velopment Research and Public Policy as well as a number of invited external reviewers provided unusually detailed comments and critiques of the early drafts of the report. These careful and thoughtful reviews significantly in- fluenced the final versions as they appear in this volume. Finally, ~ would like to offer special thanks on behalf of the Committee on Child Development.Research and Public Policy to Robert Haggerty, President of the W. T. Grant Foundation, for his advice and support through- out the study. But for his interest and initiative, this study would never have been done. William A. Morrill, Chair Committee on Child Development Research and Public Policy

Next: 1 Introduction »
Development During Middle Childhood: The Years From Six to Twelve Get This Book
× 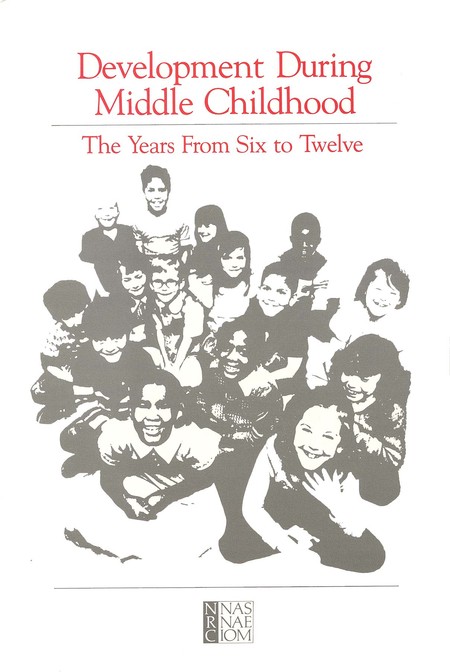 For the first time, a report focuses specifically on middle childhood—a discrete, pivotal period of development. In this review of research, experts examine the physical health and cognitive development of 6- to 12-year-old children as well as their surroundings: school and home environment, ecocultural setting, and family and peer relationships.