Get This Book
Visit NAP.edu/10766 to get more information about this book, to buy it in print, or to download it as a free PDF.
« Previous: Scientific Feasibility of Epidemiologic Study
Page 94 Share Cite
Suggested Citation:"Conclusions and Recommendations." National Research Council. 1997. Toxicologic Assessment of the Army's Zinc Cadmium Sulfide Dispersion Tests. Washington, DC: The National Academies Press. doi: 10.17226/5739.
×

THE SUBCOMMITTEE WAS charged to determine whether the exposure of the public to ZnCdS in many U.S. and Canadian locations, from the Army's dispersion tests, posed any health risks. To address this charge, the subcommittee reviewed the available toxicity data on ZnCdS and cadmium compounds, the input from the public concerning the health problems they reported, and exposure data to determine whether exposure to ZnCdS was related to any health effects in the exposed persons. The subcommittee also quantified the risk of potential health effects of ZnCdS exposures. The subcommittee's conclusions and recommendations are as follows.

INPUT FROM THE PUBLIC

People were outraged by being exposed to chemicals by the government without their knowledge or consent. The subcommittee did not address ethical and other social issues about the Army's dispersion tests; these questions are important, and the Army must develop a mechanism for addressing the public's sense of outrage, but these issues were beyond the subcommittee's charge and expertise.

Data on the toxicity of ZnCdS are sparse. Results of feeding studies conducted in dogs and rats suggest that ZnCdS is practically nontoxic following acute (single, high-dose) exposures. ZnCdS was not found to be a skin or eye irritant in rabbits.

The physical and chemical properties of ZnCdS are fairly well understood. It is soluble only in strong acids and probably not absorbed through the skin or gastrointestinal tract. Its lack of solubility suggests that it is highly unlikely that free cadmium ions would become bioavailable as a result of inhalation of ZnCdS; however, information is not available on whether ZnCdS might break down in the respiratory tract into more soluble components, which could easily be absorbed into the blood. The information on physical and chemical properties and the limited toxicity data available suggests that ZnCdS is not likely to show systemic toxicity.

The subcommittee in its interim report (NRC 1995) recommended that the Army conduct studies to determine the bioavailability and inhalation toxicity of ZnCdS in experimental animals. This research will strengthen the database needed for assessing the risks of ZnCdS and lessen the need to rely on the use of a surrogate for toxicity information. The Army has begun the research recommended by the subcommittee, and the results are expected shortly. The subcommittee recommends that when the results of the research become available, they be reviewed by experts outside the Army to determine whether the subcommittee's conclusions are still valid or should be modified.

ties and toxicity, the subcommittee believes that CdS should be considered a surrogate for ZnCdS for noncancer health effects. Results of several toxicity studies conducted in experimental animals indicate that CdS inhaled into the lung is not solubilized and absorbed into the blood for distribution to other organs. Therefore, the subcommittee concluded that sporadic exposure of the public to small amounts of ZnCdS should not result in any noncancer systemic toxicity (toxicity to the kidneys, bone, immune system, or reproductive and developmental system). The only organ considered to be potentially at risk because of exposure to particles of ZnCdS was the respiratory tract; the particles of ZnCdS were respirable and would be expected to deposit deep in the lungs. Results of several toxicity studies indicate that CdS has little toxicity in the respiratory tract. Rats exposed to CdS at 39,600 mg-min/m3 had only a mild pulmonary response.

Inhaled cadmium has been shown in occupational studies and laboratory studies of animals to cause lung cancer but not cancer at other body sites. Cadmium exposures associated with increased lung-cancer risk in human and animal studies were to much higher concentrations for longer periods and involved more biologically soluble compounds than the exposures to cadmium from ZnCdS in the Army's testing program.

Estimated average total daily intake from environmental and industrial exposures to cadmium from all media (soil, water, food, and air) of 12-84 µg in urban areas is greater than any daily exposures to cadmium resulting from the ZnCdS particles in the Army tests, with the exception of the test conducted at Biltmore Beach, an isolated beach area in Florida. It should be noted that the cadmium intake directly from air (that is, via inhalation) contributes very little to total cadmium intake in urban and industrial areas. At approximately half the Army's test sites, the highest monitored ZnCdS concentrations had concentrations of airborne cadmium (in the form of ZnCdS) that were above the estimated urban average daily airborne cadmium, but the subcommittee concluded that these short-term

high concentrations would have minimal impact on total cadmium exposures which is mainly from water, food, and soil.

The only organ system considered to be potentially at risk because of exposure to particles of ZnCdS was the respiratory tract; the particles of ZnCdS were respirable and would be expected to deposit deep in the lungs. Since little toxicity data is available on ZnCdS, the subcommittee based its assessment of the potential toxicity of ZnCdS for noncancer health effects on the toxicity of CdS. Results of several toxicity studies indicate that CdS has little toxicity in the respiratory tract. Rats exposed to CdS at 39,600 mg-min/m3 had only a mild pulmonary response. Using that result and dividing by 10 to extrapolate from a lowest-observed-adverse-effect level to a no-observed-adverse-effect level by 10 to extrapolate from animal to human exposures, and by 10 to account for sensitive populations, one would not expect adverse noncancer health effects, even in sensitive populations, from exposure to cadmium in an insoluble form, such as CdS, at 39.6 mg-min/m3 or 39,600 µg-min/m3 or cadmium at 30,900 µg-min/m3 (39,600 x 0.78 = 30,900 µg-min/m3), or 513 µg of inhaled cadmium dose.

The four highest estimated inhaled cadmium doses were in Minneapolis (6.8 µg), Winnipeg (14.5 µg), St. Louis (24.4. µg), and Biltmore Beach, FL (390 µg). The potential doses of cadmium from ZnCdS tests did not exceed the level considered to be ''safe'' (513 µg) for noncancer effects at any test site.

The subcommittee also estimated maximal lifetime excess lung cancer risk for the locations with the highest cadmium exposures (i.e., Biltmore Beach, St. Louis, Winnipeg, and Minneapolis). Cancer risk estimates were based on the cadmium content of ZnCdS because no studies on the carcinogenicity of ZnCdS have been conducted and cadmium is the most-toxic component, so this approach is likely to overestimate the risk. For each test site, the location with the highest average reported air concentration of cadmium was used to calculate cancer risk. The risk estimates were multiplied by a factor of 10 to account for exposure to sensitive populations. The estimated upper-bound lung-cancer risks are small and ranged from less than 0.01 x 10-6 to 24.0 x 10-6.

The vast majority of people were exposed to concentrations that were less than the highest by a factor of 2-10 or even more. Accordingly, their

cancer risks would be lower by a factor of 2-10 or more. The subcommittee concluded that given the extremely low concentrations of ZnCdS (or cadmium from ZnCdS) in the air and the short duration of exposure, the lung-cancer risk, if any, is likely to be very low. Thus, it is unlikely that anyone in the test areas would have developed lung cancer from direct exposure to airborne releases of ZnCdS. On the basis of a review of the scientific literature, information presented at the public meetings, and an analysis of exposure information, the subcommittee concluded that the list of disorders reported by people living in areas where ZnCdS was released reflects diseases found in the general population and cannot be attributed to the ZnCdS releases.

The subcommittee evaluated the feasibility of an epidemiologic study in relation to various methodologic issues. Various study designs were considered in light of the information presented by members of the public attending the public hearings.

The subcommittee has concluded that there are three major barriers to carrying out an epidemiologic study of the health effects of ZnCdS: lack of complete and accurate exposure data on individuals; inadequacies in data on health outcomes before, during, and after the periods of exposure; and, because of the low exposures, the requirement of a huge sample to detect any small increase in adverse health effects. Accurate measurement of individuals' doses is probably not possible, given the very small contribution of ZnCdS to the concentration of cadmium in the environment. Information on potential confounders also would be lacking. The subcommittee concludes that an epidemiologic study of the affected populations is not feasible.

It is highly unlikely that free cadmium ions would become bioavailable to target organs as a direct result of inhalation of ZnCdS. However, information is not available on whether ZnCdS might break down in the respiratory tract into more-soluble components, which could be absorbed into the blood.

Next: References »
Toxicologic Assessment of the Army's Zinc Cadmium Sulfide Dispersion Tests Get This Book
× 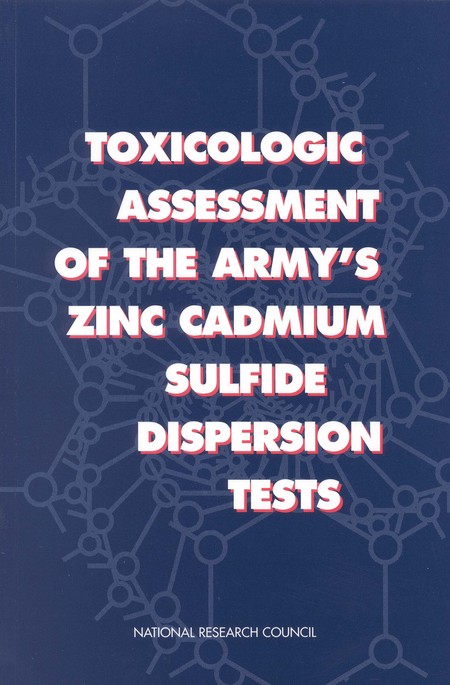 During the 1950s and 1960s, the U.S. Army conducted atmospheric dispersion tests in many American cities using fluorescent particles of zinc cadmium sulfide (ZnCdS) to develop and verify meteorological models to estimate the dispersal of aerosols. Upon learning of the tests, many citizens and some public health officials in the affected cities raised concerns about the health consequences of the tests. This book assesses the public health effects of the Army's tests, including the toxicity of ZnCdS, the toxicity of surrogate cadmium compounds, the environmental fate of ZnCdS, the extent of public exposures from the dispersion tests, and the risks of such exposures.