The Role of Chromium in Animal Nutrition (1997)

Visit NAP.edu/10766 to get more information about this book, to buy it in print, or to download it as a free PDF.
Page i Share Cite
Suggested Citation:"Front Matter." National Research Council. 1997. The Role of Chromium in Animal Nutrition. Washington, DC: The National Academies Press. doi: 10.17226/5778.
×

Preface The United States feed industry manufactures thousands of tons of supple- ments and feed additives each year. It has been suggested that chromium should become a constituent in certain nutritional supplements for animals. Chromium sources, other than chromium picolinate (CrPic) for swine, however, have not been approved officially as feed additives for food-producing animals in the United States mainly because there has been a lack of consensus among animal nutritionists that chromium is an essential nutrient and because scientifically based dietary requirements for chromium have not been established for food- producing animals. Chromium is active biologically as a component of glucose tolerance factor (GTF), which enhances tissue sensitivity to insulin and glucose utilization. Re- sults of research and clinical investigations have shown that human patients who receive parenteral nutrition and those who are type II diabetics respond favorably to chromium supplementation. There also is evidence showing that dietary chro- mium is beneficial for people undergoing physical or metabolic stress. Although definitive data showing the effects of dietary chromium on me- tabolism, health, end performance of food-producing animals are relatively mea- ger, sufficient evidence is available which, when taken together with observa- tions made with humans, indicates that chromium may be an essential nutrient for animals. Some research results also indicate that chromium supplementation of practical diets of food-producing animals is beneficial. Because of the uncertain- ties associated with the role of supplemental chromium in animal diets, the Board on Agriculture' s Committee on Animal Nutrition of the National Research Coun- cil conducted a review and an evaluation of the scientific literature on the use of v

v! PREFACE supplemental chromium in diets of livestock and laboratory animals. The committee's charge was to conduct a thorough review of the scientific literature on chromium, determine whether chromium should be classified as an essential nutrient, and analyze the effects of chromium as a supplement of practical animal diets. A steering committee, composed of members of the Committee on Animal Nutrition, was formed in April 1996. The following individuals were responsible for the respective sections of the report: Donald C. Beitz and Ronald L. Horst, introduction and metabolic role of chromium; Karin M. Wittenberg, ruminants and horses; Jerry L. Sell, swine and poultry; George C. Fahey, laboratory animals and rabbits; and Delbert Gatlin III, fish. The report begins with a discussion of the absorption, transport, and deposi- tion of chromium in humans and animals in Chapter 1. Current knowledge of the role of chromium in metabolism of humans and animals is described in Chapter 2. Chapter 3 provides a comprehensive review of data describing the effects of supplemental dietary chromium on cattle, sheep, swine, poultry, horses, rats, rabbits, and fish. The information reviewed for each species is summarized from the perspective of whether there is sufficient evidence to conclude that chromium is an essential nutrient and whether supplementation of practical animal diets with chromium is needed. Jerry L. Sell, Chair Steering Committee

Acknowledgments The Committee acknowledges many scientists who provided input during the report preparation process. Numerous individuals supplied information and materials that were used during the Committee' s deliberations. We extend spe- cial thanks to Nancy Arth for her assistance with preparation of the report manu- script. In addition, the secretarial assistance of Ann Shuey and Mary Cochran, Iowa State University, is gratefully acknowledged. . . vat

Next: Executive Summary »
The Role of Chromium in Animal Nutrition Get This Book
× 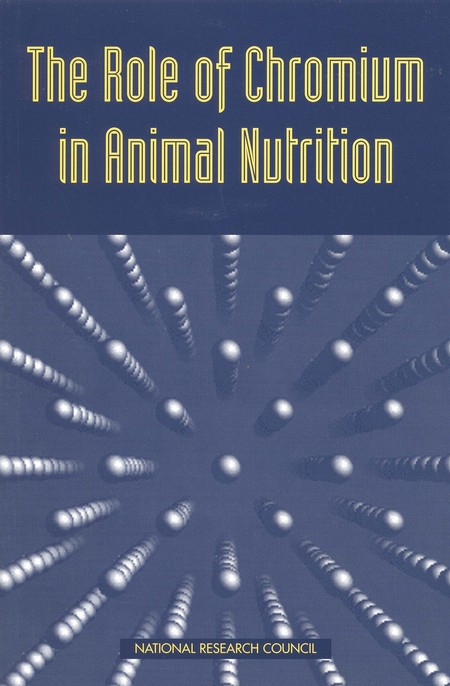 The American feed industry manufactures tons of dietary supplements and additives each year for inclusion in the diets of food-producing animals. Some scientists have suggested that chromium should be a key ingredient in nutritional supplements. Controversy exists, however, over whether chromium sources should be approved as feed additives and whether enough data exist to establish dietary requirements. Chromium use has been suggested to have positive impacts on farm profitability, and many animal health benefits have been attributed to chromium supplementation, including increased longevity; enhanced reproduction; decreased incidence of metabolic disorders, stress effects, and disease; reduced need for antibiotic usage; improved immune response; and lean carcass quality.

This book addresses recent research on chromium in animal diets; metabolic interactions between chromium and other nutrients; assessments of form and species interactions; supplementation effects; bioavailability of chromium forms and sources; and effects of diet composition, stressors, and animal physiological status on chromium utilization. It also provides recommendations on the essentiality of dietary chromium in domestic animal species and guidelines for use of dietary chromium.