Visit NAP.edu/10766 to get more information about this book, to buy it in print, or to download it as a free PDF.
Page i Share Cite
Suggested Citation:"Front Matter." National Research Council. 1984. Sex Segregation in the Workplace: Trends, Explanations, Remedies. Washington, DC: The National Academies Press. doi: 10.17226/58.
×

Preface The segregation of the sexes into different occupations, industries, and (within firms) specific jobs is one of the most stable and striking features of the American workplace. Although the sexes have become increasingly similar in their likelihood of employment outside the home, within the workplace women and men differ dramatically in the kinds of jobs they hold. Sex segregation is problematic for several reasons. Most importantly, it promotes and sustains the wage gap between the sexes. Barring substantial changes in the ways that jobs are evaluated and wages set, women's prospects for economic parity will depend on their migration into mainstream "male" jobs, away from the many low-paying jobs~most frequently hell] by women. In view of the pervasiveness of segregation and its adverse consequences for women, in 1981 several groups sponsored an examination of sex segregation in the workplace by the Committee on Women's Employment and Related Social Issues of the National Research Council. The sponsors are the U.S. Department of Ed- ucation, the Employment and Training Administration of the U. S. Department of Labor, and the Carnegie Corporation of New York. The committee's mandate was twofold: to convene a major interdisciplinary work- shop on job segregation and to prepare a state-of-the-art report on the topic. The two-day workshop, held in May 1982, brought together two dozen scholars. This volume includes revised versions of several papers presented there and the remarks of commentators, along with three papers the committee subsequently commis- sioned. These papers served as a resource to the committee in preparing its final report, Women's Work, Men's Work: Segregation on the Job, and stand as a com- panion to that volume. The purposes of the workshop were to bring together scholars from several disciplines to review the evidence for various theoretical explanations for segregation and to report empirical research they were conducting that would enlarge our understanding of its extent, form, and causes. For this reason some of the papers, · ~ vie

ant! thus the chapters in this volume, primarily review the literature (Blau, Marini and Brinton, Boos and Reskin, and O'Farrell and Harlan), while others offer up- to-date empirical findings (Belier, Bielby and Baron, Beller and Han, Rosenfeld, and Waite and Berryman). Two papers combine the presentation of original research with either a critical review of a theoretical perspective (Corcoran, Duncan, and Ponza) or the presentation of a new theoretical approach (Strober). Many of the authors of this volume thank colleagues or assistants for their help. The workshop at which most of these chapters and comments were first presented and this volume also benefited from the work of several people, to whom ~ express my appreciation. As study director of the committee, Barbara F. Reskin was a valuable intellectual resource and an able manager of our work. Marie A. Matthews, administrative assistant to the committee, was indispensable in organizing the work- shop. The members of the Committee on Women's Employment and Related Social Issues and Heidi I. Hartmann, as associate executive director of the Commission on Behavioral and Social Sciences and Education, helped identify workshop par- ticipants, participated in the workshop, and refereed papers for inclusion in this volume. Christine L. McShane, editor for the commission, worked with the authors and the National Academy Press in producing it. This volume would not exist without the behind-the-scene contributions of these people, and ~ thank them warmly. ALICE S. }LCHMAN, Chair Committee on Women's Employment and Related Social Issues · · ~ vail

Next: 1 Introduction »
Sex Segregation in the Workplace: Trends, Explanations, Remedies Get This Book
× 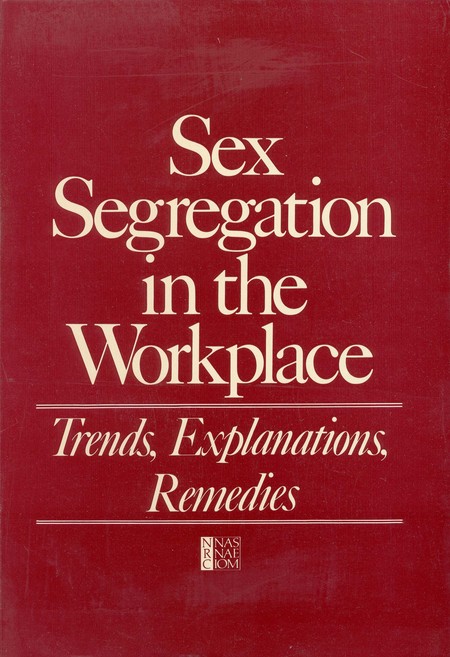 How pervasive is sex segregation in the workplace? Does the concentration of women into a few professions reflect their personal preferences, the "tastes" of employers, or sex-role socialization? Will greater enforcement of federal antidiscrimination laws reduce segregation? What are the prospects for the decade ahead? These are among the important policy and research questions raised in this comprehensive volume, of interest to policymakers, researchers, personnel directors, union leaders—anyone concerned about the economic parity of women.