Science Management in the Human Exploration of Space (1997)

Visit NAP.edu/10766 to get more information about this book, to buy it in print, or to download it as a free PDF.
Page i Share Cite
Suggested Citation:"Front Matter." National Research Council. 1997. Science Management in the Human Exploration of Space. Washington, DC: The National Academies Press. doi: 10.17226/5841.
×

Foreword From the dawn of the space age, human spaceflight and space science have made uneasy bedfellows. A 1960 report commissioned by Science Advisor George Kistiakowsky for President Eisenhower concluded that ". . . among the major reasons for attending the manned exploration of space are emotional com- pulsions and national aspirations.... It seems, therefore, to us at the present time that man-in-space cannot be justified on purely scientific grounds, although more thought may show that there are situations for which this is not true. On the other hand, it may be argued that much of the motivation and drive for the scientific exploration of space is derived from the dream of man's getting into space him- self."i In addition to questions of motivation and justification, accommodating the frequently conflicting needs of human life support and scientific investigation inevitably increases pressures on finite financial and tangible resources. The successes of joint crowed and scientific missions, from Apollo to the Hubble repair to Shuttle/MIR, show the possible benefits of cohabitation. Of course, there have also been periods of friction and consequently unrealized po- tential. This report of the Space Studies Board' s Committee on Human Explora- tion examines U.S. spaceflight history and draws lessons about "best practices" for managing scientific research in conjunction with a human spaceflight pro- gram. Since NASA's current focus is the development and subsequent operation of a crowed orbital laboratory, the International Space Station, some of these lessons should be immediately useful. The report is intended to be especially germane for a national decision to resume human exploration beyond low Earth orbit. Claude R. Canizares, Chair Space Studies Board i"Report of the Ad Hoc Panel on Man-in-Space," December 16, 1960, in Exploring the Unknown, Volume I: Organizing for Exploration, John W. Logsdon, ea., NASA SP-4407, NASA, Washington, D.C., 1995, p. 411. . . vat

Preface In 1988 the National Academy of Sciences and the National Academy of Engineering stated in the report Toward a New Era in Space: Realigning Policies to New Realities that ". . . the ultimate decision to undertake further voyages of human exploration and to begin the process of expanding human activities into the solar system must be based on non-technical factors. It is clear, however, that if and when a program of human exploration is initiated, the U.S. research com- munity must play a central role by providing the scientific advice necessary to help make numerous political and technical decisions." Since its establishment in 1958, the Space Studies Board, formerly the Space Science Board, has been the principal independent advisory body on civil space research in the United States. In this capacity, the Board established the Commit- tee on Human Exploration (CHEX) in 1989 to examine science and science policy matters concerned with the return of astronauts to the Moon and eventual voy- ages to Mars. The Board asked CHEX to consider three major questions: signs? missions? 1. What scientific knowledge is prerequisite for prolonged human space mis 2. What scientific opportunities might derive from prolonged human space 3. What basic principles should guide the management of both the prerequi- site scientific research and the scientific activities that may be carried out in con- junction with human exploration? This report addresses the third of these topics. The first was the subject of Six

x PREFACE Scientific Prerequisites for the Human Exploration of Space, published in 1993, and the second was treated in Scientific Opportunities in the Human Exploration of Space, published in 1994. In developing principles to guide management of the science covered in the first two reports, the committee observed that the productivity of the scientific component of human space exploration appears to be correlated with the organi- zational approach and structure used to manage the program. It is reasonable, then, to look back and try to formulate principles and recommendations that can strengthen the prospects for future success. It was not the committee' s charge or intent to tell NASA precisely how to organize itself; indeed, there are several possible organizational arrangements that would be consistent with the conclu- sions of this study. Moreover, no organizational arrangement can guarantee suc- cess in the absence of clearly articulated and commonly agreed on goals. Throughout its study, the committee has made a deliberate effort to find ways to abolish the historic dichotomy between space science and human exploration and to seek ways to encourage a synergistic partnership. When the committee initiated its work in 1989, it appeared that NASA might proceed with a new initiative in the human exploration of the solar system, spe- cifically human missions to the Moon and Mars, and there was an interest on the part of the Space Studies Board to influence these new activities. Since that time, urgency to proceed to an implementation phase abated as budget pressures and a drastically changed world political situation weighed against any near-term com- mitment. On the other hand, the nation's commitment to human presence in low Earth orbit has become firmer with the pending orbital assembly of the Interna- tional Space Station. Moreover, interest in a Mars human exploration program has been aroused by the recent announcement of possible evidence of relic bio- logical activity in a meteorite of martian origin. The associate administrators for space science and human exploration recently directed NASA field centers to initiate planning for an integrated approach that could be brought forward "some- time in the second decade of the next century." The fact that human exploration beyond low Earth orbit is once again a subject of public dialogue and active planning makes this report especially timely. Noel W. Hinners, Chair Committee on Human Exploration

Next: Executive Summary »
Science Management in the Human Exploration of Space Get This Book
× 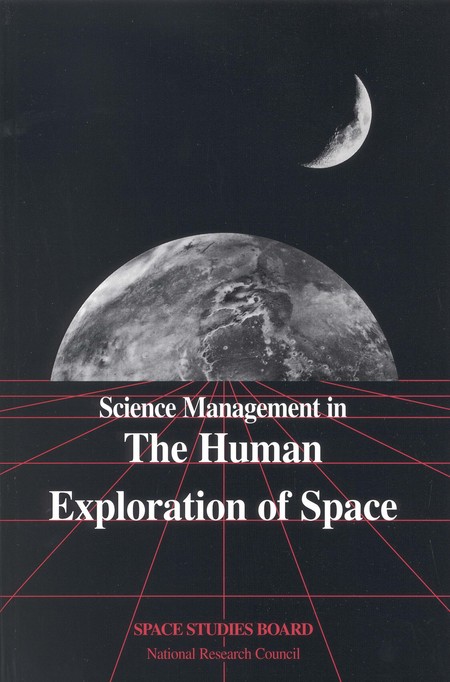