Visit NAP.edu/10766 to get more information about this book, to buy it in print, or to download it as a free PDF.
Page i Share Cite
Suggested Citation:"Front Matter." National Research Council. 1985. Engineering Education and Practice in the United States: Engineering Technology Education. Washington, DC: The National Academies Press. doi: 10.17226/588.
×

Preface The Panel on Technology Education was one of four panels estab- lished lay the Committee on the Education and Utilization of the Engi- neer to investigate educational aspects of the preparation of engineers in the United States. Although its membership was limited, the panel sought to provide as broad a base of experience and expertise as possi- ble. Panel members were drawn from the fields of civil, electrical, and mechanical engineering. Their backgrounds included experience with large and small institutions, both state-supported and independent, and with programs that ranged from two-year curriculum through grad- uate study. In addition, panel members represented a number of geo- graphic areas, such as the Northeast, the Middle Atlantic states, and the Southwest. At the beginning of its study, the panel identified a list of topics that it considered to be of primary concern in engineering technology educa- tion. This report documents the panel's findings relating to these topics and its recommendations for further action. The study is also intended to provide supporting material for the main report, ~ to which readers are therefore referred for information in other areas of specific interest. For further information on educational issues, see also the companion volumes of the other three education panels. J *Engineering Education and Practice in the United States: Foundations of Our Techno-Economic Fu ture (Washington, D . C .: National Academy Press, 198 5 ~ . . . .

1V PREFACE In conclusion, I wish to express my appreciation to the many partici- pants in this study on technology education the panel members and the staffs of both the National Research Council and the Wentworth Institute of Technology for their invaluable efforts in collecting and condensing the available material. Edward T. Kirkpatrick Chairman >

ENG - EERING EDUCATION AND PRACTICE IN THE UNITED STATES =010g)T

Next: Executive Summary »
Engineering Education and Practice in the United States: Engineering Technology Education Get This Book
× 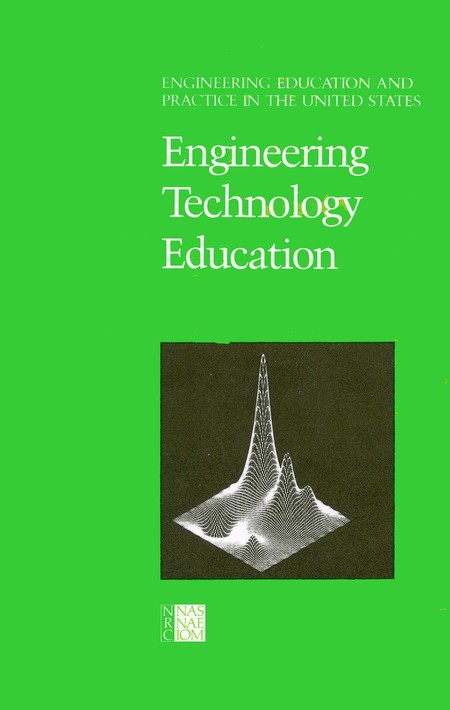