Chapter:RESEARCH ON IDENTIFYING POPULATIONS AT RISK FOR ADVERSE EVENTS

Get This Book
Visit NAP.edu/10766 to get more information about this book, to buy it in print, or to download it as a free PDF.
« Previous: GENETIC FACTORS AFFECTING DEVELOPMENT OF AUTOIMMUNITY
Page 37 Share Cite
Suggested Citation:"RESEARCH ON IDENTIFYING POPULATIONS AT RISK FOR ADVERSE EVENTS." Institute of Medicine. 1997. Vaccine Safety Forum: Summaries of Two Workshops. Washington, DC: The National Academies Press. doi: 10.17226/5881.
×

In general, the genetics of autoimmune diseases makes it difficult to determine whether these syndromes could be induced by vaccines. The facts that multiple genes and environmental factors can cause a single autoimmune disorder and that the genetic markers for susceptibility may not be the genes causing the increased risk but are only closely linked on the DNA strand to the genes for those risk factors complicate the process of determining causation. These risk factors can also differ among ethnic and racial groups. The hypothesis that some adverse effects of vaccines are caused by viral vaccine-related HERV gene expression is a reasonable hypothesis. However, the current lack of experimental research confirming or refuting the hypothesis makes it impossible at this time to attribute vaccine effects to this type of genetic influence.

RESEARCH ON IDENTIFYING POPULATIONS AT RISK FOR ADVERSE EVENTS

Individual susceptibility to vaccine adverse effects may be associated with population risk factors of various sorts. The following sections represents topics chosen by the Forum members, based on their knowledge of potentially promising research. These studies include those that examine the potential link between the following: arthritis and rubella vaccine; anaphylaxis and measles, mumps, and rubella vaccine; convulsions and DPT; high-titer measles vaccines and mortality; multiple sclerosis or Guillain-Barré syndrome and vaccination; multiple-antigen vaccinations and adverse events; and premature infants and adverse events following vaccination.

Rubella (German measles) infections are associated with arthritis in some patients, and there is concern that the rubella vaccine, which consists of a live weakened strain of rubella virus, might instigate an autoimmune response that results in arthritis (Institute of Medicine, 1991). Research has uncovered two cellular host proteins to which the rubella virus needs to bind in order to

Investigators are assessing whether people given the rubella vaccine develop autoantibodies to the two self-antigens needed for viral replication and whether such autoantibody production is associated with the development of non-rheumatoid arthritis in the long term. Another recent study, however, has not found a correlation between arthritis and rubella vaccination (Slater et al., 1995). A geneticist from the National Institute of Child Health and Human Development (NICHD) suggested assessing whether genetic variation in the genes that code for the two self-antigens to which rubella virus binds might explain differences in susceptibility to arthritic complications of rubella or rubella vaccination.

Anaphylaxis is a life-threatening allergic reaction whose symptoms include itching, hives, low blood pressure, abnormal fluid retention that causes swelling of tissues, and difficulty breathing. According to a report by the Institute of Medicine, the evidence established a causal relation between measles, mumps, and rubella vaccine and anaphylaxis. Estimates of the risk range from 1 per 20,000 to 1 per 1,000,000 per doses distributed (Institute of Medicine, 1994a).

Measles, mumps, and rubella vaccine consists of measles, mumps, and rubella antigens, gelatin, sorbitol, neomycin, and residual egg proteins. Because egg proteins can stimulate an anaphylactic reaction in individuals severely allergic to eggs, it has been assumed that the egg-related antigens in the vaccine were responsible for the rare cases of anaphylaxis that occur following vaccination. Consequently, the American Academy of Pediatrics (AAP) has recommended that children with severe egg allergies be skin tested for allergy to the vaccine. If they test positive, they must then receive a series of allergy shots to desensitize them to the vaccine. It is also recommended that they be observed by trained medical personnel for 20 minutes after vaccination (American Academy of Pediatrics, 1994).

Recent studies suggest that the AAP guidelines may not be appropriate or sufficient. In one study of 224 children with a history of egg allergy, only 29 skin tested positive to measles, mumps, and rubella vaccine. Of these children,

Future research on the food allergies of patients who have anaphylactic reactions to vaccines should help discern the cause of these reactions. Once the component of the vaccine responsible for the reaction is determined, improved screening protocols for patients at risk for such reactions can be developed. Alternatively, vaccine manufacturers may be able to eliminate the allergenic component of a vaccine.

Another study of the reports of anaphylaxis occurring following vaccination against measles, mumps, and rubella indicated that the time to the onset of the anaphylaxis reactions was less than 20 minutes in fewer than half of the subjects (Phillips, unpublished data). These data suggest that 20 minutes may not be an adequate time for observing a patient after vaccination with the vaccine. In addition, most of the reports were of anaphylaxis that occurred after receipt of the second dose of the measles, mumps, and rubella vaccine, so a history of receipt of the vaccine without adverse consequences may not indicate a low risk of adverse consequences in the future.

According to Chen, these findings confirm the results of previous studies and suggest that the AAP recommendations regarding vaccination with DPT are still valid. These recommendations are that infants with a history of convulsions not receive DPT until their neurologic conditions are clearly determined. Once determined, they should then receive diphtheria and tetanus toxoids (DT) unless the seizure disorder is controlled, in which case they should receive DPT. ACIP has concluded that a family history of febrile convulsions should not deter infants from receiving DPT (CDC, 1993). More rigorous controlled studies need to be conducted, however, to assess firmly the risk of convulsions following vaccination with DPT in infants with a personal or family history of febrile or afebrile convulsions.

CDC is conducting a large controlled study of the risk of convulsions following vaccination with DPT in infants who are neurologically impaired or considered at risk of being neurologically impaired because of a number of factors, including being born prematurely, deprived of oxygen during birth, or developmentally delayed. This study will use data in the Large Linked Database (LLDB), a CDC-coordinated linkage of four large health maintenance organizations' databases. Comprised of automated data for nearly 500,000 children in Oregon, Washington, and California, the LLDB includes information on hospital, outpatient and emergency department utilization. Using these files, researchers can identify children who are neurologically impaired or at risk of such impairments, and assess their response following vaccination with DPT in comparison with children not recently vaccinated. According to Davis, the number of children in the study is large enough to determine with relatively high statistical confidence whether children with neurologic impairments or at risk for neurologic impairment are at increased risk for experiencing convulsions following vaccination with DPT.

According to Holt, initial tests of this vaccine indicated that infants at 5 to 6 months of age had immune responses similar to those found among children who received standard-titer measles vaccine at 9 months of age. Adverse events associated with the vaccine, such as rash and fever, occurred at rates similar to those among children who received the standard measles vaccine.

More long-term studies in Haiti, Guinea-Bissau, and Senegal, however, found that girls who received the high-titer vaccine were more likely to die before the age of 3 years than those who received the standard vaccine (Aaby et al., 1993a; Garenne et al., 1991; Holt et al., 1993). The two most common causes of death in the Haiti study were diarrhea and malnutrition. On the basis of these findings, WHO recommended in 1992 that high-titer measles vaccine not be given to children (WHO, 1992).

were not ill more often than those who received the low-titer vaccine. This was also true for girls.

Ward noted that all children in both studies had measles antibodies by age 5, even though 10 to 20 percent of these children had not developed antibodies to measles shortly after they received the measles vaccine when they were infants. These initially seronegative children were likely to have been infected with natural measles, which was circulating in Sudan and Haiti, between the time that these children were vaccinated and the time that they were followed up. This suggests that any effects observed in the study may be due, in part, to natural infection with measles and not to the measles vaccine received.

Both multiple sclerosis (MS) and Guillain-Barré syndrome (GBS) are thought to be associated with certain vaccines (IOM, 1994) but the causal mechanisms of these adverse effects are not known and somewhat speculative. On the presumption that there is an association, some possible mechanisms worth exploring were discussed at the workshop.

The hallmark of MS, which affects between 250,000 and 350,000 people in the United States (Kurtzke, 1997), is patchy destruction of the fatty sheath, called myelin, that envelops and insulates the nerves in the brain and spinal column. This destruction of myelin disrupts the passage of messages along these nerves, causing a number of symptoms that include weakness, tingling, numbness, loss of coordination and balance, dizziness, muscle spasms, slurred speech, and blurred or double vision. The cause of MS is unknown, although it is thought to be an autoimmune disorder that afflicts a subgroup of people who are genetically susceptible. According to McFarland, studies have failed to demonstrate that MS is caused by a molecular mimicry mechanism.

The symptoms of MS tend to wax and wane over time, and magnetic resonance imaging (MRI) studies suggest that patients have central nervous

system damage several years prior to the appearance of symptoms that present at time of diagnosis (Stone, 1995). The only factor shown definitively to trigger exacerbations of MS is an acute viral infection. MS patients who have acute viral infections are at greater risk for an exacerbation than those who are not infected (Sibley, 1997). Several studies have found that vaccination does not increase the risk for an exacerbation of MS (Miller et al., 1997). One study using MRI found there was no evidence of increased nerve damage in MS patients after vaccination against influenza virus (Ropper, 1992).

Another autoimmune disorder, GBS, causes progressive paralysis due to a loss of myelin around nerves. A majority of GBS patients report some kind of ''trigger" event (infections, surgery) shortly before the onset of GBS (Ropper, 1992). Studies of swine influenza vaccine recipients indicated that they had approximately 8 fold increase risk of GBS during the weeks immediately post-vaccination compared to nonrecipients (Schonberger et al., 1979; Safranek et al., 1991). It is not clear whether a contaminant or the virus itself in these batches made people more susceptible to GBS. Subsequent influenza vaccines prepared from other virus strains have not been clearly associated with an increases risk of GBS (Hurwitz et al., 1981; Kaplan et al., 1982; Chen et al., 1992). During five of six seasons studied since 1976, the point estimates of the relative risks of GBS after influenza vaccination were slightly elevated; however, in none of these studies was the overall elevation in relative risk statistically significant (CDC, 1997). This may be due to either a low barely detectable risk or by uncontrolled confounding or bias. Another study found that those individuals who reported experiencing GBS following vaccination against swine flu were not more likely than those without the syndrome to have a family or personal history of autoimmune disorders (Ropper, 1992).

Some people have expressed concern that individuals vaccinated for several diseases simultaneously might be at increased risk for experiencing adverse effects, such as abnormal immune system responses (Peeler et al., 1958; Peeler et al., 1965; White et al., 1974). Although people are constantly exposed to multiple antigens, the presentation (injection into skin or muscle, for example) of vaccine antigens is different from the way common antigens, such as food or naturally-occurring viruses and bacteria, are encountered. Many employees at the USA Medical Research Institute of Infectious Diseases at Fort Detrick in Frederick, Maryland, receive multiple vaccinations to protect them from the

Next: RESEARCH OPPORTUNITIES »
Vaccine Safety Forum: Summaries of Two Workshops Get This Book
× 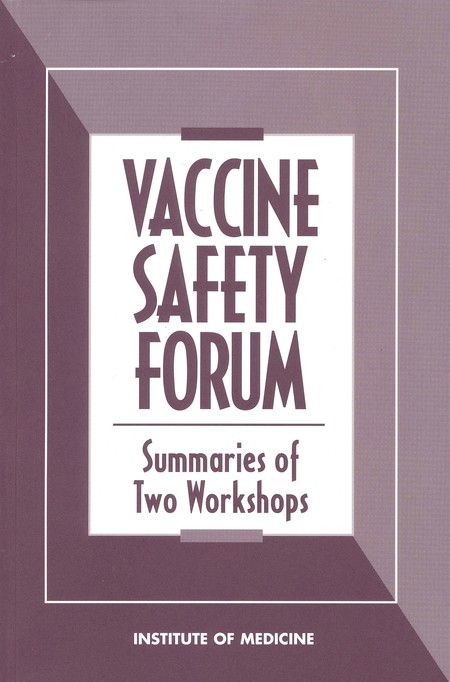