Visit NAP.edu/10766 to get more information about this book, to buy it in print, or to download it as a free PDF.
Page i Share Cite
Suggested Citation:"Front Matter." National Research Council. 1986. Engineering Undergraduate Education. Washington, DC: The National Academies Press. doi: 10.17226/589.
×

Preface This report of the Panel on Undergraduate Engineering Education is one in a set of companion reports that formed the basis of the overall study by the Committee on the Education and Utilization of the Engi- neer, performed under the auspices of the National Research Council. The work of this panel occurred during a period in which the engi- neering educational resources of the nation were subject to severe stress, primarily as a result of forces outside the control of the engineer- ing educational community. First-year enrollments doubled in a rela- tively short period of time, acute faculty shortages developed in several important disciplines, and fluctuating economic conditions influenced the support structure of engineering education. These factors, com- bined with the relatively rapid changes in technology, created an aware- ness that there were limits to the viability of our system of engineering education. Consequently, the direction of the panel's work was influenced by these factors, and its scope included topics that bear on the viability o the system. Hence, the quality, size, and diversity of the prefreshman pool was included, as well as consideration of those factors most impor- tant in the effective utilization of faculty resources. Because of the strong influence of graduate study and research on undergraduate engi- neering education, the panel examined the forces that have led to the creation of a two-tiered system of engineering programs {i.e., in research institutions versus low-research institutions) and the conse- quences of this system. . . .

1V PREFACE Although the panel considered the overall forces that have shaped and constrained engineering curricula, no attempt was made to con- duct a detailed review and assessment of the various curricula. Matters of curricular development and possible reform were not central to the purpose of the overall committee effort, and such a review and assess- ment are most properly within the domain of the individual disciplines and those organizations responsible for maintaining standards. The material in this report provides the comprehensive substantive background for the work of the full committee pertaining to undergrad- uate education. The panel is pleased to see that many of its most signifi- cant findings, conclusions, and recommendations are included in Chapter 4 of the full committee report, * and that its work is reflected prominently in the recommendations which appear in the Executive Summary of that report. This is evidence of the pivotal role of under- graduate engineering education in the techno-economic future of our nation. This report results from the work of the panel members who so generously contributed their time and professional expertise to this major effort. I would like to thank them for their valuable contributions and assistance. Finally, I wish to thank terrier A. Haddad for his stimu- lating guidance to the entire committee effort and Vernon H. Miles and William H. Michael, Tr., whose staff support was vital to the work of the panel and to the production of this report. Edmund T. Cranch Chairman * Engineering Education and Practice in the United States: Foundations of Our Techno-Economic Future {Washington, D.C.: NationalAcademy Press, 1985~.

ENGINEERING EDUCATION AND PRACTICE IN THE UNITED STATES

Next: Executive Summary »
Engineering Undergraduate Education Get This Book
× 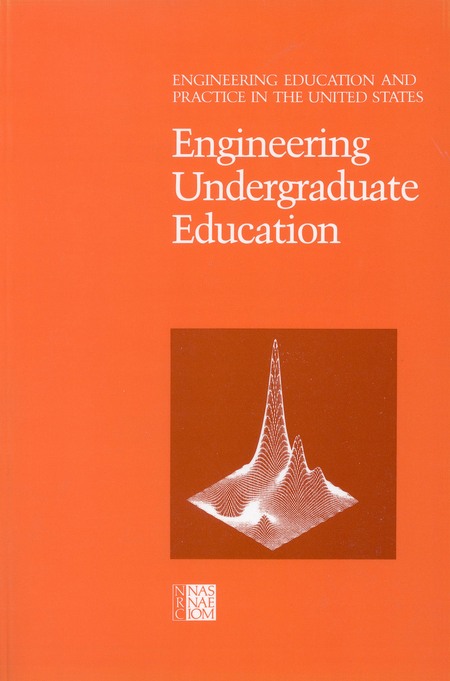