Get This Book
Visit NAP.edu/10766 to get more information about this book, to buy it in print, or to download it as a free PDF.
« Previous: Front Matter
Page 1 Share Cite
Suggested Citation:"Executive Summary." National Research Council. 1997. Aging of U.S. Air Force Aircraft: Final Report. Washington, DC: The National Academies Press. doi: 10.17226/5917.
×

The U.S. Air Force has many old (20 to 35+ years) aircraft that are the backbone of the total operational force, some of which will be retired and replaced with new aircraft. However, for the most part, replacements are a number of years away. For many aircraft, no replacements are planned, and many are expected to remain in service another 25 years or more.

The National Research Council Committee on Aging of U.S. Air Force Aircraft was formed to (1) identify Air Force aging aircraft needs and an overall strategy that addresses these needs and (2) recommend and prioritize specific technology opportunities, complementary to the efforts of industry, the Federal Aviation Administration, the National Aeronautics and Space Administration, and international organizations. The topics asked to be considered by the committee include fatigue, corrosion-fatigue interactions, and stress corrosion cracking; corrosion prevention and mitigation; nondestructive inspection; maintenance and repair; and failure analysis and life prediction technologies.

The challenge to the Air Force management and technical community is to meet the following objectives related to aging aircraft:

Objective A.  Identify and correct structural deterioration that could threaten aircraft safety.

Objective B.  Prevent or minimize structural deterioration that could become an excessive economic burden or could adversely affect force readiness.

Objective C.  Predict, for the purpose of future force planning, when the maintenance burden will become so high, or the aircraft availability so poor, that it will no longer be viable to retain the aircraft in the inventory.

The structural safety of the Air Force's aircraft is vitally dependent on damage tolerance requirements that have been imposed through military standards and specifications as part of ASIP. These requirements allow the designer to use either of the following two design approaches:

The committee concludes that, with increasing age and with changes in operation (or aircraft configuration) that increase the severity of the operational stress spectrum, the primary threats to structural safety arise from

The primary technical needs for fail-safe designs are

The economic burden associated with the inspection and repair of fatigue cracks can be expected to increase with age until the task of maintaining aircraft safety could become so overwhelming and the aircraft availability so poor that the continued operation of the aircraft is no longer viable. In addition, corrosion detection, repair, and component replacement can add significantly to or, in some cases, dominate the total structural maintenance burden.

The committee concludes that the major emphasis of the Air Force's technical and force management with regard to corrosion and stress corrosion cracking (SCC) should be focused on the early detection of corrosion and the implementation of effective corrosion control and mitigation practices so as to drastically reduce unscheduled repairs and replacement costs and aircraft downtime. Key technical issues and operational needs include

The committee believes that fatigue cracking will occur eventually on all aging aircraft as flight hours increase. From an economic standpoint, the major impact for a fail-safe-designed structure occurs with the onset of WFD. For safe-crack-growth-designed structures, the major impact occurs when the structure exhibits a rapid increase in the number of fracture-critical areas. In both cases, a choice must be made to undertake major modifications, structural replacement, or retirement. Although it may not be possible to avoid reaching this point for any given aircraft, operational changes such as fuel management, gust avoidance, active or passive load alleviation systems, reduced pressurization, and flight restrictions to minimize flight in severe mission segments can reduce the rate of fatigue damage and delay expensive repair-replace-retire decisions. For aircraft that are approaching their economic service limit, these options should be considered to allow time for modification or replacement acquisition programs.

The Air Force modernization planning process includes the essential elements for force structure planning and management, but, to be completely effective, it should significantly improve estimates of the probable economic service life of aging aircraft systems. There is no clear definition of all of the cost elements that contribute to the economic service life of an aircraft, nor is there a precise methodology for estimating when the costs of operating and maintaining a system will be high enough to warrant replacement. The committee believes that the development of an estimate of economic service life with metrics that integrate the effects of structural deterioration (i.e., from fatigue and corrosion) with economic considerations is essential to force management.

Metallic alloy structures make up the vast majority of the airframes in the Air Force aging aircraft. However, more-recent aircraft have significant quantities of primary flight controls (C-17) and primary airframe structures (B-2, F-22) constructed from carbon-fiber-reinforced polymeric composites. Although limited Navy and commercial aircraft service experience with composite laminate primary structures has indicated very few occurrences of damage in primary structures, the Air Force needs to continue to monitor the performance of their composite components. Potential degradation mechanisms to monitor in the future for composite structural applications include (1) the development of transverse matrix cracking resulting from mechanical, thermal, or hygrothermal stresses; (2) the growth of impact damage under fatigue loading; (3) the growth of manufacturing-induced damage, especially from fastener installation; or (4) the development of corrosion in adjacent metal structures. The committee recommends that the Air Force undertake long-term research to monitor potential deterioration of composite structures, including the development of improved NDE methods, and to develop or improve maintenance and repair technologies, especially for composite primary structures.

The committee recommends that the Air Force adopt a three-pronged strategy that includes (1) near-term engineering and management tasks, (2) a near-term R&D program, and (3) a long-term R&D program. Engineering and management tasks are near-term actions (within three to five years) to improve the maintenance and force management of aging aircraft. Supporting the near-term engineering and management tasks are the near-term R&D efforts that the committee believes should be performed under the direction of Air Force laboratories or by supporting contractors and academic institutions. The long-term R&D program includes those efforts that the committee believes will take longer than three to five years to achieve a mature technology that could be adopted by industry or the Air Force air maintenance organizations but nevertheless should be initiated now or continued if they already have been initiated.

The Air Force postproduction force management process, involving the implementation of inspections and modifications derived from the ASIP tasks and the results of DADTAs, has been a huge success in protecting the structural safety of the force aircraft for more than two decades. However, the committee is concerned that the extended use of old aircraft, coupled with the potentially adverse effects of reduced military budgets; reduced manpower; grade structure limitations; increased reliance on contractor maintenance; the elimination or relaxation of military regulations, standards, and specifications; and possible complacency of Air Force management, may make this past success rather fragile. The committee believes that it will take aggressive Air Force management and engineering actions to counter this deterioration in capability and loss in ASIP oversight and to prevent further deterioration in the future. The Air Force should continue to enforce ASIP and maintain sufficient resources to track the force aircraft, to keep DADTAs up to date, and to keep corrosion and stress corrosion cracking from becoming a structural safety issue. Also, sufficient resources should be maintained in R&D to support and improve the aging aircraft engineering, inspection, and maintenance and repair activities.

The committee developed prioritized recommendations for near-term (to support near-term engineering actions in the next five years) and long-term (more than five years until implementation) R&D in five program areas:

Priority levels for recommended R&D opportunities were established relative to the Air Force objectives (i.e., safety of flight [Objective A] and maintenance costs and force readiness [Objective B]). Definitions of priority categories include

Priority 1: essential to the reduction of maintenance costs and improvement of force readiness (Objective B) (i.e., would enable the Air Force to address significant technical problems)

There are no R&D efforts identified at this time that are of sufficient magnitude to be categorized as critical priority.

However, the committee believes that it is possible that the recommended DADTA updates, and in particular the high-priority updates on the A-10, F-16, U-2, and T-38, will identify critical-priority near-term R&D or engineering tasks. For example, these could involve the need to develop a specific inspection technique or a specific type of modification for one or more aircraft.

The 45 recommended research opportunities, when coupled with the 8 engineering and management tasks (which the committee considers to be essential), will substantially enhance the ability of the Air Force to address the aging aircraft problem and to sustain the forces well into the next century.

Next: Part I Problem Definition and Status of the Aging Force »
Aging of U.S. Air Force Aircraft: Final Report Get This Book
× 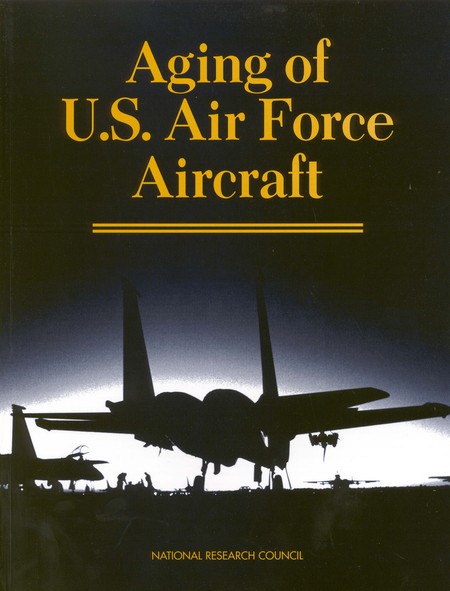 Many of the aircraft that form the backbone of the U.S. Air Force operational fleet are 25 years old or older. A few of these will be replaced with new aircraft, but many are expected to remain in service an additional 25 years or more. This book provides a strategy to address the technical needs and priorities associated with the Air Force's aging airframe structures. It includes a detailed summary of the structural status of the aging force, identification of key technical issues, recommendations for near-term engineering and management actions, and prioritized near-term and long-term research recommendations.