Visit NAP.edu/10766 to get more information about this book, to buy it in print, or to download it as a free PDF.
Page i Share Cite
Suggested Citation:"Front Matter." National Research Council. 1985. Nutrition Education in U.S. Medical Schools. Washington, DC: The National Academies Press. doi: 10.17226/597.
×

Preface As the American public becomes increasingly aware of the impor- tance of nutrition in health maintenance and disease prevention and treatment, physicians are frequently expected to provide their patients with accurate, up-to-date information and guidance con- cerning diet, food, and health. This increased public demand for nutrition information, along with growing recognition of the inte- gral role of nutrition in health, has contributed to a heightened awareness within the medical community of the need to provide physicians with adequate training in this area. The Food and Nutrition Board (FNB) of the National Research Council viewed the question of adequate and appropriate nutrition education in medical schools to be of sufficient national concern to warrant assessment. Thus, at the request of the Ruth Mott Fund and the William H. Donner Foundation, the Committee on Nutrition in Medical Education was established within the FNB and charged with examining three major issues: (1) How and to what extent is nutrition incorporated into medical school curricula? (2) What per- centage of medical schools teaches nutrition? (3) How successfully is nutrition taught in different categories of medical schools, and what are the reasons for the success or failure of the programs? The committee was also asked to make recommendations, based on its analysis of these questions, concerning the role that nutrition should play in medical education and the feasibility of and strat- egies for implementing them. In doing so, it drew upon the wide range of expertise of its eight members, who have experience in academic, clinical, and administrative aspects of medical education. Collectively, the committee represented such disciplines as bio- chemistry, physiology, nutritional sciences, pediatrics, medicine, family practice, university administration, and science and health policy. v

The report prepared by the committee begins with an Executive Summary, Chapter 1, which highlights the major findings and recommendations resulting from the study. The scientific, social, and economic forces that have shaped the role of nutrition in the medical curriculum during this century are discussed in Chapter 2. Chapter 3 directs the reader's attention to the ever-growing body of knowledge implicating nutrition as one of the etiological factors contributing to many forms of chronic and degenerative disease. The application of nutrition principles to patient care within the many medical specialties is illustrated. Chapter 4 contains sum- maries of previous conferences, congressional hearings, and sur- veys that have examined this subject as well as reviews of other relevant reports. This chapter also contains the results of an inde- pendent survey conducted by the committee to determine how and to what extent nutrition is incorporated into the curricula. The committee's review of nutrition-related questions on the National Board examinations and the view of the American Medical Student Association regarding nutrition education are also presented. To assist medical schools in incorporating nutrition into their curricula, the committee developed an outline of core concepts to identify the basic body of nutrition knowledge that all graduating medical students should acquire during their medical training. These concepts, along with examples to illustrate specific kinds of information, are presented in Chapter 5. Chapter 6 is a summary of the committee's findings based on all the data that it analyzed. It also presents the strategies for effectively incorporating nutrition into the medical school curriculum. The committee is grateful to all who contributed to the study. It wishes especially to acknowledge the contribution of the following consultants, who provided valuable information and expertise: El- eanor Young, University of Texas, San Antonio; Roland Weinsier, University of Alabama School of Medicine at Birmingham; Willard Visek, University of TIlinois; Harold Lubin, American Medical Asso- ciation; Maurice Shils and Barbara Howell, New York-New Jersey Regional Medical Center; and William Kassler, President of the American Medical Student Association. Special thanks are also due to Edithe Levit, President of the National Board of Medical Examiners, and Robert lewett, Deputy Vice President for Evaluation Programs, who were unfailingly help- fu! and supportive in providing the committee with information from the National Board examinations. The following persons also provided valuable information and V1

insight that helped make this evaluation possible: lames Schofield, Association of American Medical Colleges; Merrill S. Read, National Institutes of Health; and more than 45 deans, associate deans, and nutrition course coordinators who responded to our survey and provided support and encouragement. The committee commends Susan Berkow, the FNB staff officer for the study, for her superior performance in supporting all aspects of the committee's work and in taking the initiative, wherever needed, to propose and apply innovative approaches to accom- plishing the task. It also wishes to thank Frances Peter and Judy Grumpstrup-Scott, who provided patient and careful editorial assistance: Marianne La Veille for providing bibliographical mate- rial and other research support; and Barbara Miller for dedicated secretarial services. The committee is particularly indebted to the officials of the Commission on Life Sciences and the Food and Nutrition Board: Frederick C. Robbins, Chairman of the Commission, for his invalu- able support and assistance to the study, and Sushma Palmer, Executive Director of FNB, for her untiring dedication and commit- ment to excellence. MA 4, - ~ ^c: / MYRON WINICK Chairman Committee on Nutrition in Medical Education · e V11

Next: 1. Executive Summary »
Nutrition Education in U.S. Medical Schools Get This Book
× 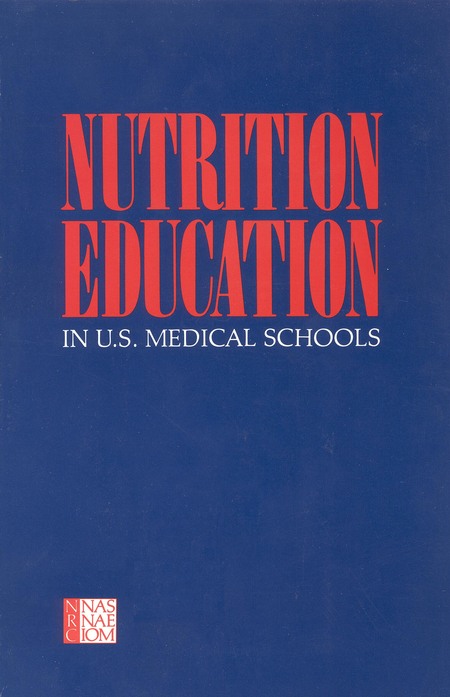 As the general public has become more aware of advances in nutrition, consumer demands for advice on matters of diet and disease have grown. This book offers recommendations to upgrade what were found to be largely inadequate nutrition programs in U.S. medical schools in order that health professionals be better qualified to advise and treat their patients. A comprehensive study of one-third of American 4-year undergraduate medical schools provided information on the current status of nutrition programs at each school. Conclusions were drawn and recommendations made from analysis of this gathered information. Questions examined in this volume include: Has medical education kept pace with advances in nutrition science? Are medical students equipped to convey sound nutritional advice to their patients? What strategies are needed to initiate and sustain adequate teaching of nutrition in medical schools?