Urban Policy in a Changing Federal System: Proceedings of a Symposium (1985)

Visit NAP.edu/10766 to get more information about this book, to buy it in print, or to download it as a free PDF.
Page i Share Cite
Suggested Citation:"Front Matter." National Research Council. 1985. Urban Policy in a Changing Federal System: Proceedings of a Symposium. Washington, DC: The National Academies Press. doi: 10.17226/598.
×

Preface The Symposium on Urban Policy in a Changing Federal System was convened by the Committee on National Urban Policy in the hope that some fresh and productive insights could be wrested from a subject that is conceptually elusive and pragmatically replete with partisan interests and feelings. Happily, that hope turned into solid and often exciting reality- a tribute to the mix and mood of the participants, and the easy way in which they matched their remarkable skills and diversity. First, a word of background. The committee emerged formally in 1981 from discussions of two concerns: the wish of the National Research Council to contribute to the improvement of America's urban condition; and the wish of academic and federal urbanists that the biennial dialogue over national urban policymandated in the Housing Act of 1970 be enriched by dispassionate inquiry into critical and emerging issues. Appropriately, financing for the committee has come from both public and private sources: the U.S. Department of Housing and Urban Development, which also funded the symposium; the U.S. Department of Commerce; the Ford Foundation; and the German Marshall Fund of the United States. The moving spirit in the establishment of the committee, and its first chair, was the late Harvey PerIoff. This is the appropriate place to honor Harvey and his leadership. It was he who insisted that the committee break out of the older ways of looking at cities and focus its work on the changing American economy and the effects of those changes on the social, economic, physical, and governmental structures of the nation and its urban areas. That focus has enabled the committee to address coherently issues that are generic and critical to cities and the nation alike and to draw together the micro and macro perspectives that have so consistently slipped past each other. v

The essence of the committee's deliberations ant! findings appears in its 1983 report, Rethinking Urban Policy. Credit goes to Royce Hanson, then study director, for capturing and creatively expanding on the most salient contributions of committee members and the sources they consulted. Having completed that report, the committee still had high on its agenda to address the question of governance and decision making: How, in the framework of the federal system, could this nation and its cities most effectively respond to the changes in the economy that are so fundamentally altering their condition? The Reagan administration, in its formula for a New Federalism, has initiated one forceful remedy: decentralization to state and local govern- ments and Revolution to the private sector. Without prejudging the assessment, it was mutually agreed by the committee and the Department of Housing and Urban Development, our sponsor, that it would be a constructive step if a symposium was held to consider recent experience and, more generally, the role of federal, state, and local governments in shaping an effective urban policy. Sixty people representing a broad range of experience and per- spectives assembled in Woods Hole, Massachusetts, June 22-23, 1984, to share their knowledge and insights. They included aca- demics currently involved in urban research, practitioners from the public and nonprofit sectors, and private-sector representatives who are all coping with the changing environment. During the conference some sharp differences found expression as must inevitably be the case when different eyes and minds try to portray and evaluate massive though often amorphous transformations in the environment around them. Lively discussion centered on such topics as state and local fiscal and programmatic capacity, the nature of the new federal role, which seeks to reverse the twentieth century pattern of taking on new responsibilities, and the problem of equity raised by federal policy changes. The most dramatic moments of the meeting, in fact, came when the issue of equity was raised as a critique of the administration's mode of shedding many of the domestic responsibilities shouldered by the federal govern- ment in preceding decades. There were also coalescing moments at the conference that de- rived from the breadth and dispassion of which this group was exquisitely capable. When viewed in that larger perspective, the American federal system is ingeniously contrived: an undulating process of moving pragmatically with the times' a digestive mechanism that absorbs partisan ideologies and reduces them to V1

assimilable practicalities. And fortunately, one that is malleable. Change it must, in a balancing act that will test every ounce of ingenuity and fairness this nation possesses. On one side, chal- lenged by global involvements and domestic travail to exert strong and unified national leadership. On the other, forced by strained resources, the befuddling complexity of modern issues, and the stubborn sophistication of an informed citizenry, to share and disperse responsibility. Not an easy predicament. But ~ came away from this conference a lot better equipped to understand and cope with it. And for that am deeply grateful, as is the committee, to those who participated. A word of thanks is needed to the people who planned and organized the symposium and produced this volume of proceed- ings. In particular to Royce Hanson, who set in motion the plans for the symposium; to Charles Warren, who skillfully managed the symposium ancI initially drafted the summary; to Brett Hammond, who, as associate executive director of the Commission on Be- havioral and Social Sciences and Education, took over programma- tic responsibilities for the committee and contributed substantially to the writing of the summary; to Christine L. McShane, editor of the Commission, and lean ShirhaD, who edited the volume and prepared it for publication; to Rose S. Kaufman, of the Commission staff, who provicled valuable administrative and secretarial sup- port; and to Shelley Westebbe, who saw to the numberless details of planning and holding a large meeting with cheerfulness and aplomb. Paul Ylvisaker, Chair Committee on National Urban Policy · ~ Nat

Next: Summary »
Urban Policy in a Changing Federal System: Proceedings of a Symposium Get This Book
× 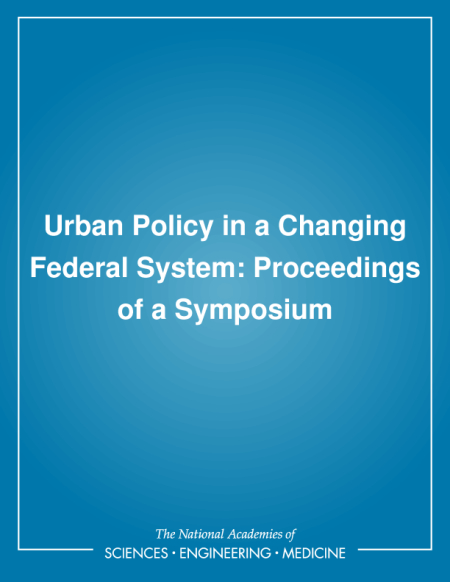 When the United States' founding fathers set up a federal system of government, they asked a question that has never been satisfactorily settled: How much governmental authority belongs to the states, and how much to the national government? In an atmosphere of changing priorities and power bases, the Committee on National Urban Policy convened a symposium to address this division. The symposium examined the "New Federalism" as it relates to the Supreme Court, urban development, taxpayers, job training, and related topics. "Throughout the symposium the future evolution of the American federal system was debated," says the book's summary. "Yet whatever new idea or theory emerges, it is likely to continue to include the inevitable conflict between the allegiance to a national government and the respect for state and local loyalties."