Welfare, the Family, and Reproductive Behavior: Report of a Meeting (1998)

Chapter:Effects of Welfare on the Family

Get This Book
Visit NAP.edu/10766 to get more information about this book, to buy it in print, or to download it as a free PDF.
« Previous: Effects of Welfare on Marriage, Fertility, and Abortion
Page 13 Share Cite
Suggested Citation:"Effects of Welfare on the Family." Institute of Medicine and National Research Council. 1998. Welfare, the Family, and Reproductive Behavior: Report of a Meeting. Washington, DC: The National Academies Press. doi: 10.17226/6001.
×

tive behaviors may be harder to change in the short run than abortion choices. Another long-term change that could affect abortion choices is a trend toward making adoption easier and providing maternity homes and support for unwed mothers. As Wade Horn pointed out, such policies and programs could allow women to perceive more options and could result in more pregnant women choosing to carry a baby to term.

EFFECTS OF WELFARE ON THE FAMILY

Childbearing and childrearing decisions are inextricably linked (Rindfuss and Brewster, 1996). A discussion of the effects of welfare on fertility requires some consideration of how welfare affects child outcomes and how welfare (and other policy instruments), may affect fathers' decisions and involvement in childrearing. These are large topics in their own right,2 so the workshop discussion was necessarily selective.

Janet Currie selected for review eight large federal programs providing either cash transfers (AFDC, Earned Income Tax Credit) or in-kind benefits (housing assistance, food stamps, the Women, Infants, Children [WIC] feeding program, school lunch and breakfast, Medicaid, and Head Start) to poor families with children. She summarized studies of the impact of these programs on various child outcomes: health, schooling, and long-term outcomes (see Table 4). Her first conclusion was that, in general, the in-kind transfers providing direct benefits to children tend to have clearer and larger impacts than cash transfers or housing. Although benefits are generally fungible (food stamps, for example, can be resold, or they can be used to free up money for purchases of other things), families receiving benefits in-kind (food, housing, preschool programs, medical care) do seem in general to end up consuming more of those services than they would without the in-kind benefit.

The policy implication is that general-purpose cash benefits have less effect on children than do benefits targeted to children. Her second conclusion was that there are too many empty cells in the table; she noted a particular lack of studies of the long-term outcomes. Although the situation is a lot better than it was a decade ago, we know too little about the effects of these programs, singly and especially in their various combinations, on child outcomes.

It is difficult to make predictions about the effects of even large changes in programs, when so little is known about their impacts on parental behaviors, and when past studies have shown such large variation in impacts across subpopulations.

"There are 'striking and largely unexplained differences in the effects of some programs by race, ethnicity, and/or natality.'"

Much of the enthusiasm for increased work requirements is motivated by a belief that welfare teaches dependency in all sorts of ways to children growing up in welfare households. Greg Duncan listed the ways in which jobs and training programs are thought to change family life: daily routines are established, the family is put in touch with networks, both of general "social capital" and of specific information about jobs; self-esteem is raised. These effects are more relevant for older children than for preschoolers, he noted. All could be important, but very little research has been done on how the AFDC system or proposed alternatives actually affect family life. Neighborhood effects might matter, in addition to the household environment (Hill and O'Neill, 1994). A basic question, emphasized by both Lindsay Chase-Lansdale and William Darity, Jr., is whether the welfare system does indeed keep children out of poverty and whether proposed changes will increase the number of children in poverty.

The Family Support Act of 1988 required all states to provide AFDC in some forms to eligible two-parent families and to make serious efforts to establish paternity and to collect child support payments from absent fathers. But as Joseph Hotz argued, the implementation of these efforts has varied widely from state to state.

The great majority of never-married mothers have no child support awards. In 1991, there were just under 10 million women caring for children in the absence of fathers (including both divorced and never-married women). For poor women, only 39 percent had received child support awards, and only 70 percent of those who had received awards were receiving payments (Wiseman, 1996:611).

Those who do receive awards generally get much lower awards, on average, than divorced or separated mothers. But earnings of unmarried fathers tend to rise with age, just as for other men (Meyer, 1995), so it could make sense, according to Hotz, for initially low child support awards to be adjusted periodically. Brien and Willis (1996) have shown that, under the Wisconsin child

Next: Research and Evaluation Needs »
Welfare, the Family, and Reproductive Behavior: Report of a Meeting Get This Book
× 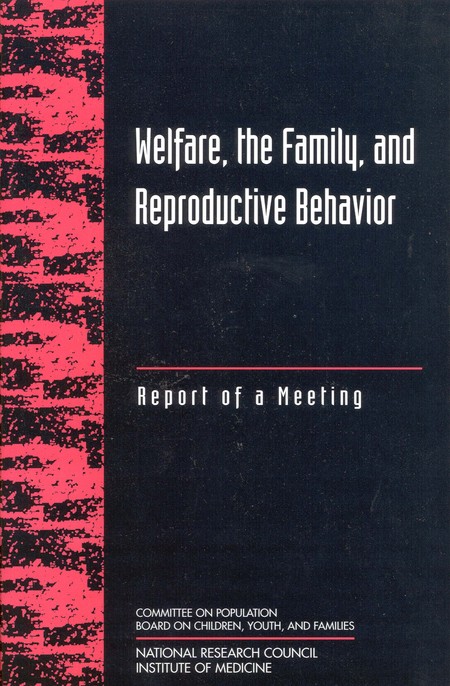 The design of welfare programs in an era of reform and devolution to the states must take into account the likely effects of programs on demographic behavior. In the past, most research on welfare has examined labor market issues, although there have also been some important evaluations of the effects of Aid to Families with Dependent Children on out-of-wedlock childbearing. Much less information is available on other issues equally central to the debate, including effects on abortion decisions, marriage and divorce, intrafamily relations, household formation, and living arrangements. This book of papers contains reviews and syntheses of existing evidence bearing on the demographic impacts of welfare and ideas for how to evaluate new state-level reforms.