Governance and Opportunity in Metropolitan America (1999)

Get This Book
Visit NAP.edu/10766 to get more information about this book, to buy it in print, or to download it as a free PDF.
Page i Share Cite
Suggested Citation:"Front Matter." Transportation Research Board and National Research Council. 1999. Governance and Opportunity in Metropolitan America. Washington, DC: The National Academies Press. doi: 10.17226/6038.
×

Governance and Opportunity in Metropolitan America

Committee on Improving the Future of U.S. Cities Through Improved Metropolitan Area Governance

This study was supported by the National Research Council.

Committee on Improving the Future of U.S. Cities Through Improved Metropolitan Area Governance 1996-1999

Division on Social and Economic Studies, Commission on Behavioral and Social Sciences and Education

Commission on Behavioral and Social Sciences and Education (through July 1998)

Commission on Behavioral and Social Sciences and Education (from August 1998)

The National Research Council was organized by the National Academy of Sciences in 1916 to associate the broad community of science and technology with the Academy's purposes of furthering knowledge and advising the federal government. Functioning in. accordance with general policies determined by the Academy, the Council has become the principal operating agency of both the National Academy of Sciences and the National Academy of Engineering in providing services to the government, the public, and the scientific and engineering communities. The Council is administered jointly by both Academies and the Institute of Medicine. Dr. Bruce Alberts and Dr. William A. Wulf are chairman and vice chairman, respectively, of the National Research Council.

The Committee on Improving the Future of U.S. Cities Through Improved Metropolitan Area Governance was charged with examining metropolitan problems and their relationship to metropolitan governance. Determining that the future of U.S. cities merited serious attention by the Academy, the Three Presidents' Committee of the National Research Council (NRC), composed of the presidents of the National Academy of Sciences, the National Academy of Engineering, and the Institute of Medicine, provided funds to support the study. The committee gratefully acknowledges additional support received from the Rockefeller Foundation for its information-gathering activities.

The committee's original scope of work and plan of action envisioned a focus on a small number of "problems of metropolitan areas" (transportation, environmental regulation, and residential segregation were suggested); the unifying concern was to be "the extent to which current governance structures contribute to improvements in these areas or exacerbate the problems." The committee's task was thus a logical extension of two previous NRC reports: Urban Change and Poverty (1988) was concerned with demographic and economic trends affecting urban areas and their central cities, and Inner-City Poverty in the United States (1990) focused more intensively on the extent and location of neighborhood poverty and the question of neighborhood effects.

It is important to be clear about how the committee formulated its task and what this report attempts and does not attempt to do. The National Research Council provided a general mandate to the committee, with the goal of opening up a new topic for examination that is socially important and could also lay the groundwork for further work in this area. Because the study was internally funded, the committee had considerable flexibility in interpreting this mandate. Charged to develop recommendations directed to the problems of American urban areas in relation to the question of governance, the committee made an early judgment to focus on inequality of opportunity in metropolitan areas, the disparities that result, the causes of these disparities, and the role of governance and the government system in contributing to and, potentially, in solving these problems.

The committee's report addresses these problems of inequality of opportunity in metropolitan areas through a review of existing research and knowledge, an assessment of the logic of alternative strategies that have been proposed, a review of research evaluating those that have been tried, and a set of recommendations for research and policy options that reflect its assessment of existing knowledge. The intended audience is the community of scholars and researchers concerned with urban areas and their functioning and informed policy makers who grapple with these issues.

The committee is composed of scholars and practitioners from a variety of relevant fields, including economics, political science, education, land use, transportation, the environment, and government. To inform its deliberations, the committee commissioned papers, held workshops, and participated in discussions with its Working Group on Race, Civic Consciousness, and Governance.

The committee benefited greatly from a set of papers it commissioned, which served as background for its discussions. These papers, by Ingrid Gould Ellen, William A. Fischel, Keith R. Ihlanfeldt, Michael A. Pagano, and Martin Wachs and Jennifer Dill, constitute the second part of this report.

This report has been reviewed in draft form by individuals chosen for their diverse perspectives and technical expertise, in accordance with procedures approved by the NRC's Report Review Committee. The purpose of this independent review is to provide candid and critical comments that will assist the institution in making the published report as sound as possible and to ensure that the report meets institutional standards for objectivity, evidence, and responsiveness to the study charge. The content of the review comments and draft manuscript remain confidential to protect the integrity of the deliberative process.

Next: Executive Summary »
Governance and Opportunity in Metropolitan America Get This Book
× 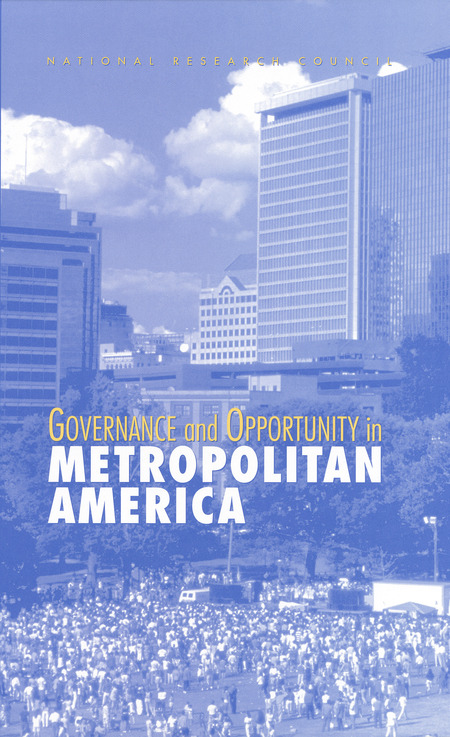 America's cities have symbolized the nation's prosperity, dynamism, and innovation. Even with the trend toward suburbanization, many central cities attract substantial new investment and employment. Within this profile of health, however, many urban areas are beset by problems of economic disparity, physical deterioration, and social distress.

This volume addresses the condition of the city from the perspective of the larger metropolitan region. It offers important, thought-provoking perspectives on the structure of metropolitan-level decisionmaking, the disadvantages faced by cities and city residents, and expanding economic opportunity to all residents in a metropolitan area. The book provides data, real-world examples, and analyses in key areas:

The book includes papers that provide in-depth examinations of zoning policy in relation to patterns of suburban development; regionalism in transportation and air quality; the geography of economic and social opportunity; social stratification in metropolitan areas; and fiscal and service disparities within metropolitan areas.