Get This Book
Visit NAP.edu/10766 to get more information about this book, to buy it in print, or to download it as a free PDF.
« Previous: Glossary
Page 49 Share Cite
Suggested Citation:"Plates 1-4." National Research Council. 1998. Exploring the Trans-Neptunian Solar System. Washington, DC: The National Academies Press. doi: 10.17226/6080.
× 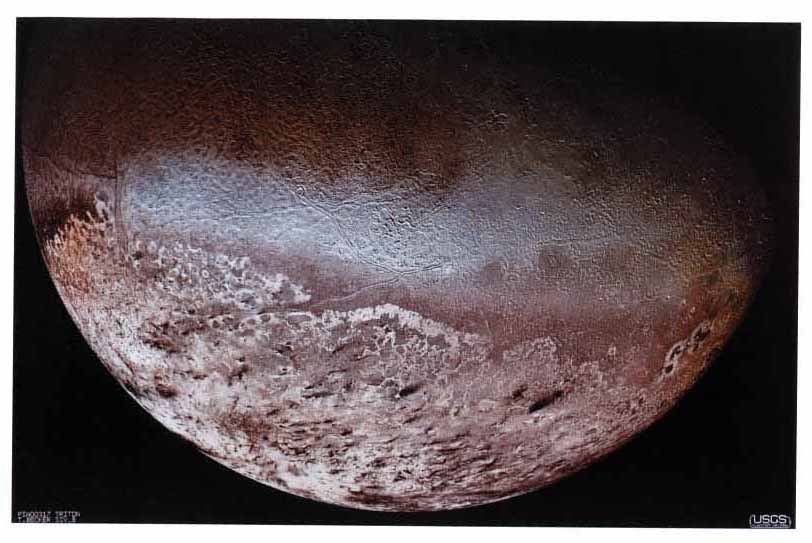 Voyager 2 image of Triton. This photomosaic provides an overview of the portion of Triton's surface seen at high resolution (1 km/pixel). The equator runs approximately through the center of the bright, bluish swath across the middle of the mosaic. Bright materials irregularly blanket most of the southern hemisphere, at the bottom. The darker plains consist of the rugged “cantaloupe” terrain, at the upper left, and a complex mix of smooth and knobbly plains, at the right. The bright material is interpreted to be deposits of solid nitrogen incorporating small amounts of methane. The bluish tint is characteristic of fresh frosts, while the reddish tint is interpreted as being due to partially irradiated methane. Image courtesy of A.S. McEwen, U.S. Geological Survey. 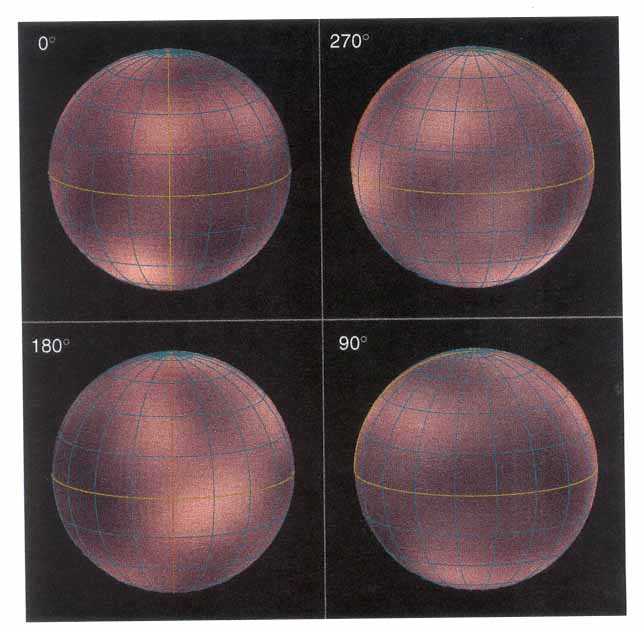 The European Space Agency's Faint Object Camera on the Hubble Space Telescope (HST) imaged most of the surface of Pluto, as it rotated through its 6.4-day period, in late June and early July 1994. The maps shown here are from a global map constructed through computer image processing performed on the Hubble data and rendered onto three-dimensional globes at 90° increments in longitude. The rendered color was derived from the rotationally averaged ground-based observations of Pluto. With a resolution corresponding to more than 600 km, HST discerns roughly 12 major “regions” where the surface is either bright or dark. These images show that Pluto is an unusually complex object, with more large-scale contrast than any planet except Earth. Some of the variations across Pluto's surface may be caused by topographic features such as basins or fresh impact craters. However, most of the surface features unveiled by HST, including the prominent northern polar cap, are likely produced by the complex distribution of frosts that migrate across Pluto's surface with its orbital and seasonal cycles and chemical by-products deposited out of Pluto's nitrogen-methane atmosphere. Image courtesy of Alan Stern, Southwest Research Institute; Marc Buie, Lowell Observatory; NASA; and ESA. 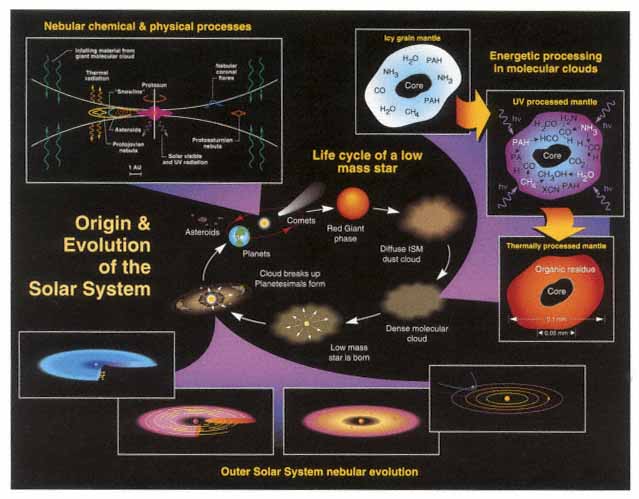 Schematic of the various stages of solar system origin and evolution. The central panel outlines the life cycle of a typical low-mass star. It shows, in particular, the intimate connection between the interstellar molecular clouds within which stars like the Sun condensed and the planetary systems formed by accretion within the protoplanetary disk surrounding the new star. The chemical elements created by nuclear reactions in the star's core and dispersed into the interstellar medium during the star's red giant phase become the raw material for new generations of stars and planetary systems. The three panels in the upper right illustrate how initially pristine icy grains can be energetically processed within dense molecular clouds to yield more chemically complex materials. The four lower panels outline various stages in the evolution of the planetary bodies of the outer solar system. They illustrate (from left to right) the evolution of the gas and dust forming the protoplanetary disks through the formation of planetesimals, the accretion of the cores of the major planets, and the subsequent dissipation of remnant nebular material and the ejection of any remaining planetesimals into the Kuiper Belt and Oort Cloud. The panel in the upper left shows some of the various physical and chemical processes that acted within the protoplanetary disk during the various stages in the formation of the planets. The resulting solar system contained a diversity of objects and regions, some of which, like the Kuiper Belt, are beginning to be explored. 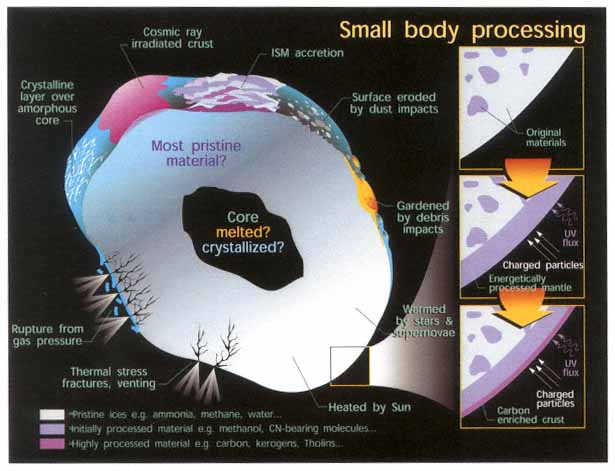 Small-body processing. This diagram illustrates the variety of processes that can occur on small bodies. These include heating events from external sources (e.g., the Sun), as well as internal events, provided the object can incorporate enough radiogenic components. At the right is a schematic of the influence of energetic processing that can alter the original materials and produce a carbon-enriched crust.

Exploring the Trans-Neptunian Solar System Get This Book
× 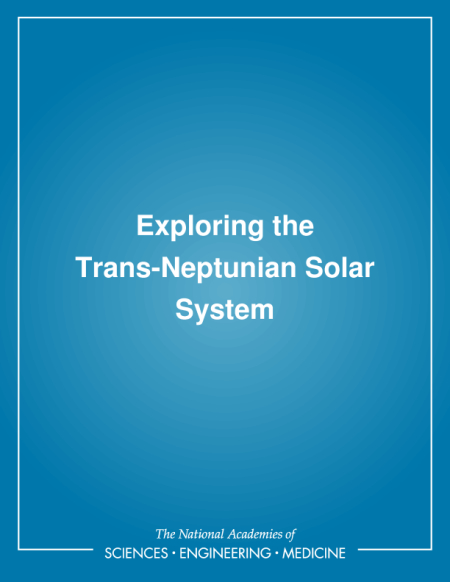 In the last decade, our knowledge of the outer solar system has been transformed as a result of the Voyager 2 encounter with Neptune and its satellite Triton and from Earth-based observations of the Pluto-Charon system. However, the planetary system does not simply end at the distance of Pluto and Neptune. In the past few years, dozens of bodies have been discovered in near-circular, low inclination orbits near or beyond the orbit of Neptune. These bodies are now believed to be directly related to each other and to Pluto, Charon, and Triton, and as a class they define and occupy the inner boundary of a hitherto unexplored component of the solar system, the trans-neptunian region. Exploring the Trans-Neptunian Solar System reviews current understanding of the trans-neptunian solar system and makes recommendations for the future exploration of this distant realm.