Get This Book
Visit NAP.edu/10766 to get more information about this book, to buy it in print, or to download it as a free PDF.
Page i Share Cite
Suggested Citation:"Front Matter." National Research Council. 1998. Evaluating the Biological Potential in Samples Returned from Planetary Satellites and Small Solar System Bodies: Framework for Decision Making. Washington, DC: The National Academies Press. doi: 10.17226/6281.
×

The National Research Council was organized by the National Academy of Sciences in 1916 to associate the broad community of science and technology with the Academy’s purposes of furthering knowledge and advising the federal government. Functioning in accordance with general policies determined by the Academy, the Council has become the principal operating agency of both the National Academy of Sciences and the National Academy of Engineering in providing services to the government, the public, and the scientific and engineering communities. The Council is administered jointly by both Academies and the Institute of Medicine. Dr. Bruce Alberts and Dr. William A. Wulf are chairman and vice chairman, respectively, of the National Research Council.

This study was supported by Contract No. NASW-96013 between the National Academy of Sciences and the National Aeronautics and Space Administration. Any opinions, findings, conclusions, or recommendations expressed in this publication are those of the author(s) and do not necessarily reflect the views of the organizations or agencies that provided support for this project.

Copyright © 1998 by the National Academy of Sciences. All rights reserved.

For the first time since the Apollo program, NASA has specific plans to bring samples to Earth from elsewhere in the solar system. The earliest mission, Stardust, is scheduled to be launched in 1999 and return approximately 7 years later with a collection of cometary and interplanetary material. Other missions in various stages of definition would gather bits from Mars, an asteroid, or the satellites of Jupiter.

Prudence demands giving proper attention to handling extraterrestrial samples so that they pose no risk to Earth's biosphere. At the same time, an unreasonable level of concern could needlessly escalate the cost of sample handling or obviate such missions altogether.

Since Mars is the place most often considered as a possible host of past or present microbial life forms and one from which samples will surely be returned within the next decade, it has received the greatest amount of attention, including a recent study by a task group of the Space Studies Board (National Research Council, 1997, Mars Sample Return: Issues and Recommendations, National Academy Press, Washington D.C.). The present report broadens the scope of consideration to encompass the other bodies in the solar system.

In addition, the report considers further research that would inform this issue and reduce areas of uncertainty. Learning how some of Earth's hardier microbes would fare under the extreme conditions of radiation and temperature can help increase our understanding of the sterilization processes that occur naturally in parts of the solar system.

Since NASA has plans to bring Mars rocks back to Earth within a decade, the proper procedures for handling the most suspect samples must be put in place. This report shows that the full machinery of containment will also be required for some material, but certainly not everything, collected in our neighborhood.

The National Research Council's Space Studies Board provides guidance to NASA on planetary protection, which is the effort to preserve conditions for future biological and organic exploration on planets and other solar system objects and to protect Earth and its biosphere from potential extraterrestrial sources of contamination. In 1997, the Space Studies Board produced the report Mars Sample Return: Issues and Recommendations, which assessed the potential for a viable exogenous biological entity to be included in a sample returned to Earth from Mars as well as the potential for large-scale effects if such an entity were inadvertently introduced into Earth's biosphere. The report provides justification for and recommendations on procedures for the quarantine of samples returned from Mars.

In response to NASA's request, the Space Studies Board convened the Task Group on Sample Return from Small Solar System Bodies to assess the potential for a living entity to be present in or on samples returned from small solar system bodies by addressing the following:

The task group met three times over an 11-month period, reviewed relevant reports, was briefed by representatives from NASA and expert researchers and practitioners on topics related to sample return, and held a workshop to obtain a wide spectrum of perspectives. The task group considered in some detail the following topics:

The central concern addressed by the task group in this report is the possibility that samples returned to Earth from small solar bodies might harbor living entities that could harm terrestrial living organisms or disrupt their ecosystems. The primary audience for the task group's report is NASA, those who have a stake in sample return missions and planetary protection, and the public at large.

The task group members wish to thank those individuals who made presentations at the task group meetings, including Sherwood Chang, NASA-Ames; Christopher Chyba, University of Arizona; Ben Clark, Lockheed-Martin; John Cronin, Arizona State University; James Ferris, Rensselaer Polytechnic Institute; Marina Fomenkova, University of California, San Diego; Ted Roush, San Francisco State University; and Perry Stabekis, Lockheed-Martin. Special thanks are given to John Rummel and Michael Meyer for serving as the project's points of contact at NASA and for their presentations to the task group.

This report has been reviewed by individuals chosen for their diverse perspectives and technical expertise, in accordance with procedures approved by the National Research Council's (NRC's) Report Review Committee. The purpose of this independent review is to provide candid and critical comments that will assist the authors and the NRC in making the published report as sound as possible and to ensure that the report meets institutional standards for objectivity, evidence, and responsiveness to the study charge. The content of the review comments and draft manuscript remain confidential to protect the integrity of the deliberative process. We wish to thank the following individuals for their participation in the review of this report:

Marsha I. Lester, University of Pennsylvania;

Although the individuals listed above provided many constructive comments and suggestions, responsibility for the final content of this report rests solely with the authoring task group and the NRC.

Next: Executive Summary »
Evaluating the Biological Potential in Samples Returned from Planetary Satellites and Small Solar System Bodies: Framework for Decision Making Get This Book
× 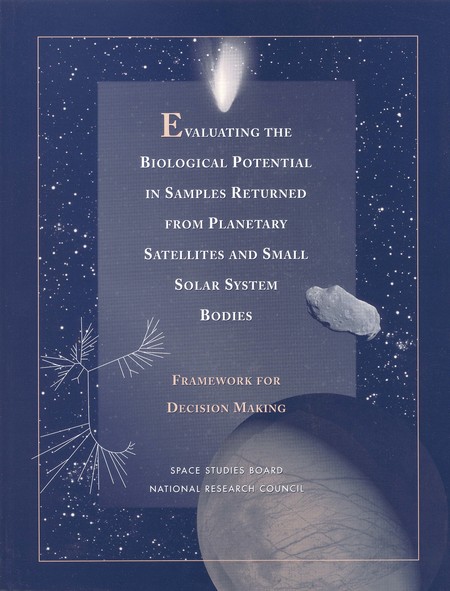 For the first time since the Apollo program, NASA and space agencies abroad have plans to bring samples to Earth from elsewhere in the solar system. There are missions in various stages of definition to gather material over the next decade from Mars, an asteroid, comets, the satellites of Jupiter, and the interplanetary dust. Some of these targets, most especially Jupiter's satellites Europa and Ganymede, now appear to have the potential for harboring living organisms.

This book considers the possibility that life may have originated or existed on a body from which a sample might be taken and the possibility that life still exists on the body either in active form or in a form that could be reactivated. It also addresses the potential hazard to terrestrial ecosystems from extraterrestrial life if it exists in a returned sample. Released at the time of the Internationl Committee on Space Research General Assembly, the book has already established the basis for plans for small body sample retruns in the international space research community.