Visit NAP.edu/10766 to get more information about this book, to buy it in print, or to download it as a free PDF.
Page i Share Cite
Suggested Citation:"Front Matter." National Research Council. 1999. U.S. Industry in 2000: Studies in Competitive Performance. Washington, DC: The National Academies Press. doi: 10.17226/6313.
×

NATIONAL ACADEMY PRESS · 2101 Constitution Ave., N.W. · Washington, D.C. 20418 NOTICE: The conference from which the papers in this publication were drawn was approved by the Governing Board of the National Research Council, whose members come from the councils of the National Academy of Sciences, the National Academy of Engineering, and the Institute of Medicine. The members of the board responsible for the project were chosen for their special competences and with regard for appropriate balance. This publication was supported by the National Aeronautics and Space Administration, the Na- tional Science Foundation, the Office of Industrial Technologies of the U.S. Department of Energy, the Alfred P. Sloan Foundation, Ralph Landau, and the Lockheed Martin Corporation. Any opinions, findings, conclusions, or recommendations expressed in this publication are those of the author(s) and do not necessarily reflect the view of the organizations or agencies that provided supoort for the project. Library of Congress Cataloging-in-Publication Data U.S. industry in 2000: studies in competitive performance / David C. Mowery, editor. p. cm. Papers presented at a conference held at the National Academy of Sciences in Washington, D.C., on Dec. 8-9, 1997. ISBN 0-309-06179-2 (pbk.) 1. Industries United States Forecasting Congresses. 2. Economic forecasting United States Congresses. 3. United States Economic conditions 1981 Congresses. I. Mowery, David C. II. National Research Council (U.S.). Board on Science, Technology, and Economic Policy. III. Title: US industry in 2000 HC106.82.U17 1999 338.0973'09'051 dc21 99-6102 Copyright 1999 by the National Academy of Sciences. All rights reserved. Cover: The emblem appearing on the cover of this publication is an illustration of the bronze medal- lion in the floor of the Great Hall in the National Academy of Sciences building in Washington, D.C. The medallion is the wellhead placed in the floor when the spectroscopic case over which the Fou- cault pendulum swings is lowered below floor level. The design is based on a map of the solar system published in 1661 by Andreas Cellarius Palatinus. The array of the planets is the Copernican system as know to Galileo. Printed in the United States of America

Preface In 1991 the National Academies of Sciences and Engineering established the Board on Science, Technology, and Economic Policy as a forum in which econo- mists, technologists, scientists, financial and management experts, and policymak- ers could broaden and deepen understanding of the relationships between science and technology and economic performance. In its first three years, the Board's activities focused on the adequacy and efficiency of public and private domestic investment in physical and human capital. The Board's first report, Investing for Productivity and Prosperity, underscored the need for higher rates of national saving and investment. Its principal recommendation was to shift the base for taxation from income to consumption. In the past two years, the Board has turned its attention to more microeco- nomic concerns technology policies broadly defined and their relationship to international trade relations, determinants of competitive performance in a wide range of manufacturing and service industries, and changes in patterns of R&D and innovation investments. A series of conferences, workshops, and reports, of which this volume is the third, comprises the latter body of STEP work which we are calling, U.S. Industry: Restructuring and Renewal, because it represents a broad assessment of U.S. industrial performance in an international context at a time of domestic economic confidence and optimism but uncertainty about the consequences of fundamental changes in the composition of the economy, pro- cesses of innovation, and economic troubles abroad. Previous publications under this title include Industrial Research and Innovation Indicators, the report of a workshop on measurement of industrial research and innovation, and Borderline Case: International Tax Policy, Corporate Research and Development and In- vestment, a collection of papers by leading tax scholars, practitioners, and policy v

v! U.S. INDUSTRYIN2000 analysts. A report of the STEP Board's conclusions from the project, Securing America's Industrial Strength, is being published simultaneously. This series of activities would not have been possible without the financial support of the Na- tional Aeronautics and Space Administration and National Science Foundation and the personal encouragement of Daniel Goldin, NASA Administrator. This volume was conceived by Ralph Landau, a founding member of the STEP Board. With the exception of the Introduction, the papers included in it were presented at a conference, "America's Industrial Resurgence: Sources and Prospects," held at the National Academy of Sciences in Washington, D.C., on December 8-9, 1997. The authors are members of multidisciplinary research teams studying economic performance and technological change at the industry level most of them projects sponsored by the Alfred P. Sloan Foundation. The group of industries examined does not represent a carefully selected sample rep- resentative of the economy but rather reflects a decision to capitalize on the work of these groups. Notable omissions are the natural resource extraction indus- tries petroleum and mining agriculture and forestry, and automobiles. On the other hand, the selection includes three "service" industries retail banking, trucking, and food retailing and thus addresses by far the largest and in many ways most dynamic sector of the economy. To help integrate this work, the Board asked David Mowery, professor at the Haas School of Business at the University of California at Berkeley, to develop a general framework to analyze the determinants of performance over the past 15 or 20 years. The single exception was an analysis of shifts in comparative advan- tage in the chemical industry over a 150-year period. Following two workshops in which the investigators shared their analysis with other industry experts, the resulting papers were discussed with representatives of the subject industries, interested government officials, and other scholars at the Washington conference. Commentators included Jeff Burke, Seagate Technology; Tim Cyrus, General Motors Powertrain Group; Linda Dworak, Garment Industry Development Cor- poration; Mike Eskew, United Parcel Service; Kenneth Flamm, The Brookings Institution; F.G. Jauss, U.S. Steel Corporation; Richard Manning, Pfizer, Inc.; Joy Nicholas, Food Marketing Institute; Dan Schutzer, Citicorp; James Sinnett, The Boeing Company; Larry Sumney, Semiconductor Research Corporation; and Ed Wasserman, E.I. du Pont de Nemours & Co. The labor market implications of structural and technological change in these industries were addressed by a panel including Howard Rosen, Minority Chief of Staff of the congressional Joint Eco- nomic Committee; Jared Bernstein, Economic Policy Institute; Craig Olson, Uni- versity of Wisconsin School of Business; and Thomas I. Palley, AFL-CIO. Addi tional funds for the conference and this publication were provided by the Office of Industrial Technologies, U.S. Department of Energy, the Sloan Foundation, Ralph Landau, and the Lockheed Martin Corporation. The Board is grateful to all of these participants and sponsors, but especially to David Mowery and Ralph Landau.

PREFACE Vi! The industries studied exhibit great diversity in structure and evolution as well as enormous "churning" that has taken a variety of forms, often negative for some regions and workers employment downsizing, shifts in location of opera- tion, and changes in the skill requirements of many jobs. Nevertheless, the gen- eral picture is one of stronger performance in the 1990s than in the early 1980s, attributable to a variety of factors including supportive public policies, competi- tion and openness to innovation, and changes in supplier and customer relation- ships factors that might not be as readily apparent if the analysis were of the macroeconomy or at the level of the firm. Vigorous foreign competition forced changes in manufacturing processes, organization, and strategy but then receded, making the performance of U.S. industries look even better. None of these favor- able conditions, least of all the latter, is permanent. The studies persuasively make the point that U.S. industries' superior performance in the past decade is not guaranteed to continue. For that reason among others, incidentally, the stud- ies underscore the importance of maintaining independent centers of industry expertise. This collection has been reviewed in draft form by individuals chosen for their diverse perspectives and technical expertise, in accordance with procedures approved by the NRC' s Report Review Committee. The purpose of this indepen- dent review is to provide candid and critical comments that will assist the institu- tion in making the published report as sound as possible and to ensure that the report meets institutional standards for objectivity, evidence, and responsiveness to the study charge. The review comments and draft manuscript remain confi- dential to protect the integrity of the deliberative process. We wish to thank the following individuals for their participation in the re- view of this report: Eileen Appelbaum, Economic Policy Institute; Thomas Bailey, Institute on Education and the Economy, Teachers College, Columbia University; France Cordova, University of California at Santa Barbara (review coordinator); Katherine Hughes, Institute on Education and the Economy, Teach- ers College, Columbia University; Anita McGahan, Graduate School of Business, Harvard University; and Richard Rosenbloom, Graduate School of Business, Harvard University While the individuals listed above have provided constructive comments and suggestions, responsibility for the final content of this report rests entirely with the authors, the STEP Board, and the institution. A. MICHAEL SPENCE Chairman (until June 30, 1998) DALE W. JORGENSON Chairman (from July 1, 1998) STEPHEN A. MERRILL Executive Director and Project Director

Next: 1 America's Industrial Resurgence (?): An Overview »
U.S. Industry in 2000: Studies in Competitive Performance Get This Book
× 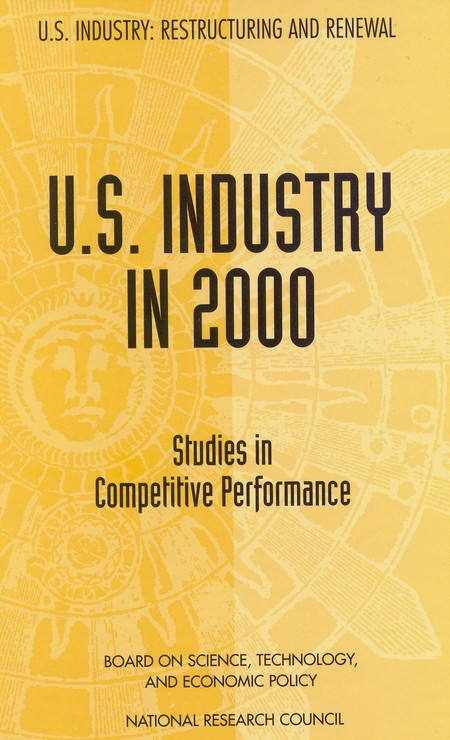 U.S. industry faced a gloomy outlook in the late 1980s. Then, industrial performance improved dramatically through the 1990s and appears pervasively brighter today. A look at any group of industries, however, reveals important differences in the factors behind the resurgence—in industry structure and strategy, research performance, and location of activities—as well as similarities in the national policy environment, impact of information technology, and other factors.

U.S. Industry in 2000 examines eleven key manufacturing and service industries and explores how they arrived at the present and what they face in the future. It assesses changing practices in research and innovation, technology adoption, and international operations.

Industry analyses shed light on how science and technology are applied in the marketplace, how workers fare as jobs require greater knowledge, and how U.S. firms responded to their chief competitors in Europe and Asia. The book will be important to a wide range of readers with a stake in U.S. industrial performance: corporate executives, investors, labor representatives, faculty and students in business and economics, and public policymakers.