Visit NAP.edu/10766 to get more information about this book, to buy it in print, or to download it as a free PDF.
« Previous: APPENDIX E
Page 169 Share
Suggested Citation:"APPENDIX F." Transportation Research Board. 1996. Capacity Analysis of Traffic-Actuated Intersections: Final Report. Washington, DC: The National Academies Press. doi: 10.17226/6347.
×

APPENDIX F DESCRIPTION OF DATA SETS USED FOR MODEL EVALUATION IN NCHRP PROJECT 3-48 The analytical models developed under NCHRP Project 348 are intended to predict signal timing and estimate delay at a signalized intersection with traffic-actuated operation. To verify and evaluate alternative models, several hypothetical data sets and one field data set were used In this study. For hypothetical data sets, the predicted signal timing and delay were compared with results from TRAF- NETSIM simulation. This appendix describes the intersection geometry, phase sequence, tragic volumes and the actuated control parameters for all data sets used for the mode! evaluation. The details and results of the evaluations are presented in separate sections ofthis report. lIYPOTEIETICAL DATA SETS To provide a general comparison oftraffic-actuated signal timing and delay prediction between HCM Chapter 9 Appendix II method and proposed analytical model, several hypothetical data sets based on four HCM Chanter 9 sample problems (SPI, SP3, SP4 and SP51 and seven hv~othetical examples fit ~ TT~^ AT'-~ TV'- A TT'-r TT'-~ 1 It__ · ~ · <~1, Am, Am, Am, Am, ~o and am/' were used. Chinese data sets were selected from a group of sample problem data sets prepared bv the Signalized Intersections Subcommittee ofthe Hi~hw.av in- - ~ ~ r--r~-~~ I ~~~~ ~~~~~~~~~~~~~~~~~~~~~~~~~~ ~~~~~~~~~~~~~~ ~~ ~ ~ ~ ~ J Capacity Committee. Some of the traffic and operational data were modified to increase the range of conditions included In this analysis. NETSIM was used as the evaluation too! for both signal timing and delay models. The WHICH data base manager program was used for the data input process. The ACT348 program, developed under NCEIRP Project 348 to implement the proposed models and produce the signal timing and delay, can be executed directly Dom WHICH. The equivalent Input file for NETSIM can also be created auto- maticaDy Tom WHICH. For arty input file, NETSIM defaults were adopted when specific data were not available. Base Intersection Layouts In order to intensively evaluate the proposed analytical models, possible practical intersection layouts have been considered. There are a total often base intersection layouts (SPI, SP3, SP4, =l, ~2, ~3, HE4, =5, HE6 and HE7) used In this study which are presented as follows. In HCM sample calculations, the geometry of HCM sample 5 (SP5) is similar to HCM sample ~ (SPl), so only the intersection layout of S ~ is shown in Figure If-. This is a one-lane street for both north-southbound approaches and a two-lane street for the east-westbound approaches. The intersection for HCM sample 3 shown in Figure F-2 is a major CBD junction of two arterial streets. Both facilities have ~ four lanes, with exclusive lePr-turn lanes provided at the intersection on all four approaches. Figure F-3 shows the geometry of HCM sample 4. This is a six-lane street versus a four-lane street. Each approach has an exclusive ledc-turn lane. The hypothetical intersections of ~l, HE2, HE3, HE4, YES, HE6 and ~7 are shown in Figures F-4 through F-IO, respectively. Appendix F: Page 1

k~^ +~1 EN 1 ~ 7 8 Figure F-17. Lagging dual left turns ~ >t ~ >; I 4; ~ , 1 3 4 ! ~ 7 8 Figure F-18. Leading and Lagging with dual left turns Note that, for the shared lane scenarios, only permitted left turns were used. Compound left turn protection was intensively evaluated at approaches with an exclusive left turn lane. The traffic volumes and actuated parameter range used in the hypothetical data sets are shown as follows: Traffic volumes per lane: Minimum green time: · - maximum green time: Detector length: Allowable gap: Ideal saturation flow rate: 50vph-350vph 50 vph - 800 vph 5 see- 15 see 10 see - 20 see 10 see- 30 see 30 see - 80 see 25 tic - 30 fit 2 see - 3.5 see 1800 vphgp! - 1900 vphgp} (left turn) (through plus right turn) (left tum) (through plus right turn) (led turn) (through plus right turn) (placed at the stopline) The summary of the characteristics of the sample data sets is shown in Table F-~. There are a total of 27 data sets, some of which have subordinate data sets. The file name with an extension ".WC~' indicates a WITCH input file. These two worksheets come Dom the output of the ACT3-48 pro gram. For the data set with subordinate data sets, only the first subordinate data set is shown because the others are similar to the first one. The phase sequences are determined by the control specifica- tion in WHICH. They fall into the category of eight different phase sequences as mentioned before. The specification and notation of the data set is addressed in the comment column in Table Fat. Data sets from I-21 were used in this report for evaluating the proposed signal timing prediction model. Data sets Tom ~ to 19 and 22 to 27 were used for comparing candidate delay models.  Appendix F: Page 5

WELD DATA To fi=her verify the analytical mode} for traffic-actuated signal timing prediction, a field study was performed at the intersection of Museum Road and North-south Drive on the University of Florida campus In Gainesville, Florida. In total, 32 hours of data were recorded over three weekdays. The study periods included the morning peak the May peak and the afternoon peak. The site was a four-legged intersection with one through lane and one exclusive 250-foot left turn bay on each approach. The intersection layout is shown in Figure F-19. At this intersection, standard dual-ring phasing was applied with protected plus permitted left turns. The idea saturation flow rate was assumed to be 1900 vehicles/hour. Pedestrian recall was set in the controller and the duration for WALK plus Flashing DON'T WALK was 22 seconds. The intergreen time (yellow plus all red) was 5 seconds. The allowable gap setting was 3.5 seconds for through movements and 2.5 seconds for left turns. Ah detectors were 25 feet in length placed at the stopline. The minimum green time was set at 16.5 seconds for through phases and 10 seconds for leR turns. The maximum Keen time was set at 45 seconds for through phases and 15 seconds for left turns on Museum Road. The corresponding maximum Keen time settings for through and leD turn phases for North-south Drive were 30 and 10 seconds, respectively. IS Orion SB t"'".2. ~2.-. \::: 1 ~ Cob 1 1- l~o \1 .-.N . . . IS Drive NB 111 -^ Cl: Figure F-19. Intersection configuration of Museum Road and North-south Drive on the campus of the University of Florida Appendix F: Page 8

Next: APPENDIX G »
Capacity Analysis of Traffic-Actuated Intersections: Final Report Get This Book
× 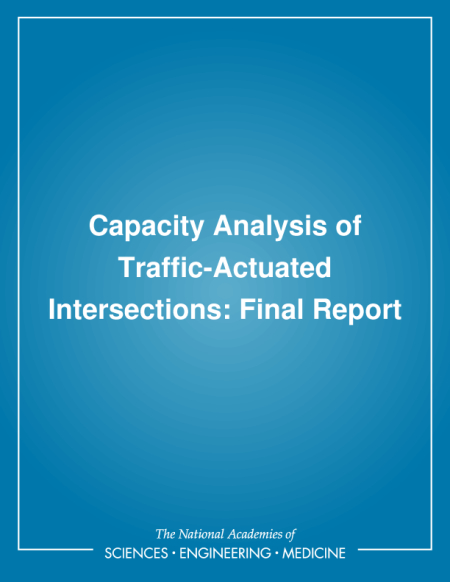