EXECUTIVE SUMMARY for LABORATORY DETERMINATION OF RESILIENT MODULUS FOR FLEXIBLE PAVEMENT DESIGN Practical resilient modulus laboratory test me~ods were developed for asphalt concrete, aggregate base and granular and cohesive subgrade materials. The findings of this study, including the proposed resilient modulus test methods, are based on extensive laboratory testing, round-robin studies of limited scope and statistical Monte CarIo pavement Sickness designs based on Be 1986 AASHTO Design Method. OPTIMUM RESILIENT MODULUS TESTING SYSTEM For production resilient modulus testing, a completely automated, modern electro-hydraulic loading and data acquisition system is a necessity to maximize the number of tests performed and to minimize the potential for testing and data reduction errors. A complete verification of the testing system is required even if the system is new. Verifying the proper operation of Be electronics and mechanical aspects of the testing system requires supervision by an engineer knowledgeable in these types of systems as well as the availability of a senior level laboratory technician. Full system calibration, including testing synthetic specimens having known resilient moduli, is absolutely essential to ensure reliable resilient modulus test results. Before resilient modulus testing is begun, laboratories need to develop a well-planned and carefully supervised program which includes using synthetic specimens for calibration. Some test equipment does not work as advertised, and technicians often have too little experience to identify and correct the source of problems. Also, not all laboratories carefully follow calibration and/or testing procedures. A rushed laboratory testing schedule frequently leads to problems. The test of reasonableness of measured resilient moduli was found to be all too frequently absent from laboratory test procedures. ASPHALT CONCRETE RESILIENT MODULUS TESTING MEIHODS AND PROCEDURES Existing methods were reviewed for empirically predicting the resilient modulus for asphalt concrete. The Asphalt Institute Method, corrected for locally used materials and testing devices, appears to offer a practical alternative to performing resilient modulus test on a routine basis. Different laboratory test methods. such as the repeated load biaxial test and the diametral test. apply different stress conditions to a specimen. As a result, the resilient moduli obtained from these different methods usually do not agree. The repeated load diametral test is recommended as the most practical, realistic method for evaluating the resilient modulus of asphalt concrete. An extensive resilient modulus testing program was carried out using the diametral test. All tests were conducted using a 0.l sec., haversine shaped loading pulse applied by a closed loop, electro V1

hydraulic testing system. Experiments were performed to identify the most accurate and reliable diametral testing device. Loading equipment evaluated in the study were as follows: (~) Retsina device, (2) MTS device, (3) Baladi's device and (43 SHRP Load Guide device. The following four deformation measuring devices were also studied: (~) stand alone EVDTs, (2) an extensometer mounted on the specimen, (3) a gage-point-mounted (GPM) setup and (43 a special combined measurement system using a surface mounted EVDT to measure vertical deformation and externally mounted transducers to measure horizontal deformation. Diametral resilient modulus tests were per foe on laboratory prepared asphalt concrete specimens having a coarse and medium gradation as well as on field cores and synthetic specimens. Temperatures of 41°F, 77°F and 104°F were used in these tests. in performing these tests, equipment calibration, including the use of synthetic specimens was found to be a critical aspect required to obtain reliable test results. Specimen rocking was also determined to be an important consideration in selecting an appropriate loading device. The extensive laboratory diametral tests on asphalt concrete specimens revealed that the SHRP EG device minimizes rocking of the specimen. A mountable extensometer device provides less variance and hence better repeatability within the five load cycles used for resilient modulus determination. Poisson's ratio is one of the most important parameters influencing the resilient modulus. The measurement system using a surface mounted EVDT to measure vertical deformation and externally mounted transducers to measure horizontal deformation has potential for determination of consistent and reasonable Poisson's ratio. Based on the statistical analysis of test results, suitable levels of the load amplitude and preconditioning cycles at different temperatures were determined. A new resilient modulus diametral test procedure was proposed based on these findings. BASE AND SUBGRADE RESILIENT MODULUS TESTING METHODS AND PROCEDURES The repeated load biaxial test is recommended to evaluate in the laboratory the resilient modulus of base, subbase and granular subgrade materials. A repeated load test performed on an unconfined specimen is recommended for cohesive subgrade soils. Axial deformation measurements should be made on the specimen. An optical extensometer, non-contact proximity gages and light sensitive EVDTs mounted on lightweight clamps can all be used . The optical extensometer, however, is highly recommended for measuring axial deformation. The test system must be carefully calibrated to minimize system compliance (i.e., extraneous deformation) and assure proper load alignment. Major Testing Issues. The following major resilient modulus test issues completely overshadow over test details which usually have relatively minor influence on He measured resilient modulus: (~) use of a fully automated loading and data acquisition system to minimize errors, (2) accurate measurement of axial deformation including end bedding effects of cohesive soils, (3) cohesive specimen aging effects, (4) environmentally induced changes in MR including moisture changes and (5) soil structure of compacted cohesive specimens. Failure to properly account for any of these major factors can easily lead to errors of 30 to 100% or more in He measured resilient modulus. These important testing issues, as well as less important testing details, are hilly considered in the report. . . V11

~- The optical extensometer can easily be used to accurately measure axial deformation of a granular specimen subjected to confining pressure by applying a vacuum pressure to Be inside of the specimen. This test eliminates He need to use a biaxial cell. Hence this test is both simple to set up and requires no special changes in equipment to use the optical extensometer. A simple quasi-static test can, if necessary, be used to satisfactorily measure the resilient modulus of granular materials. The quasi-static test does not require either a sophisticated testing system or data acquisition system. The coefficient of variation of resilient moduli, with careful equipment calibration, is as small as about If% if one specimen is used and 89Z~ for two specimens. The popular K-O resilient modulus mode! cannot always distinguish one material from another at the 95% confidence level. Therefore, the more accurate Uzan or UT-Austin models are recommended. Cohesive Soil Optimum Test Method. An unconfined repeated load test is proposed for both undisturbed and compacted cohesive subgrade specimens. The unconfined compression test is simple to perform and also allows He easy use of an optical extensometer since a biaxial cell is not required. Axial deformation can be measured direc~dy on He specimen using either an optical extensometer, cIamp-mounted EVDTs (except on soft specimens) or noncontact proximity gages. Axial deformation can also be measured between solid end platens if the specimen ends are either grounded or an empirical end correction is applied to He measured resilient modulus. To obtain reliable subgrade resilient moduli, the following factors must be properly handled: (~) accurate axial strain measurement including considering specimen end bedding effects which is usually not done at He present time, (2) specimen strength gain with time, (3) specimens must be representative of insitu soils encountered along the route, (4) moisture variations with time and (5) permanent deformation behavior. IMPORTANT DESIGN CONSIDERATIONS Environmental Moisture Cycle. The most realistic memos of pavement design, as suggested in the 1986 AASHTO Guide, is to analyze the pavement for a number of different time periods throughout the year. Because of varying moisture contents throughout the year, the resilient modulus (and also the resistance to permanent deformation) is continually changing. The difference in resilient modulus for dry and wet conditions can be as large as 100% or more and must be considered in design. To correct for varying moisture contents in the base and subgrade, empirical corrections can be applied to the resilient modulus obtained at a reference moisture content and density. Emoirical Resilient Modulus RelationshiDs for Use in Design. Resilient modulus testing at the level of sophistication needed to obtain satisfactory results, for most laboratories, is more suitable for a research project than for routine production type testing. A very attractive approach for obtaining resilient moduli for use in design, for at least most agencies, is to determine values of resilient modulus using generalized empirical relationships using statistically relevant, easy to measure physical properties of the material. Considering the large variation in resilient moduli along the route and important design changes in moisture with time, the use in design of empirical resilient modulus relationships is considered to be justified. A number of states have already developed generalized resilient modulus relationships for use in design, particularly for cohesive subgrade soils. viii 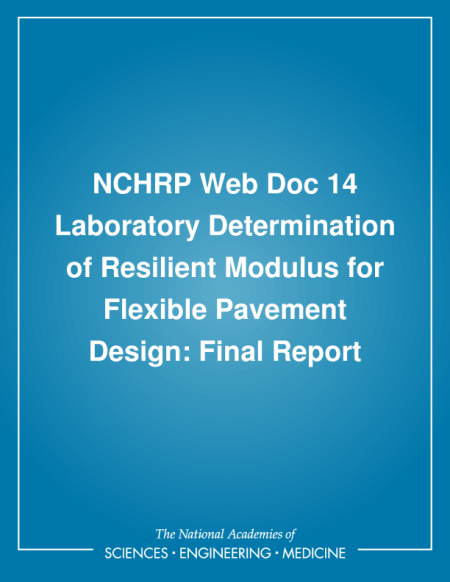