Nature's Numbers: Expanding the National Economic Accounts to Include the Environment (1999)

Get This Book
Visit NAP.edu/10766 to get more information about this book, to buy it in print, or to download it as a free PDF.
« Previous: Appendix D Glossary
Page 224 Share Cite
Suggested Citation:"Appendix E Biographical Sketches." National Research Council. 1999. Nature's Numbers: Expanding the National Economic Accounts to Include the Environment. Washington, DC: The National Academies Press. doi: 10.17226/6374.
×

WILLIAM D. NORDHAUS (Chair) is A. Whitney Griswold Professor of Economics at Yale University. He is on the staff of the Cowles Foundation and is a Research Associate of the National Bureau of Economic Research. He is a member of the Committee on National Statistics and has served on several National Research Council panels, including the Committee on Carbon Dioxide Assessment (Commission on Geosciences, Environment, and Resources), the Committee on Alternative Energy Research and Development Strategies (Commission on Engineering and Technical Systems), the Policy Implications of Greenhouse Warming Synthesis Panel and Adaptation Subpanel (Policy Division), and the Committee on the Human Dimensions of Global Change (Policy Division, Commission on Behavioral and Social Sciences and Education). He is a former member of the President's Council of Economic Advisers, is a senior advisor for the Brookings Institution Panel on Economic Activity, and served as Provost of Yale University from 1986 to 1988.

CLARK S. BINKLEY is Senior Vice President, Investment Strategy and Research, for the Hancock Timber Resource Group. He was formerly Dean of the Faculty of Forestry and Professor of Forest Resources Management at the University of British Columbia during the panel's deliberations. He holds a Ph.D. in forestry and environmental studies from Yale University, a master's degree in engineering from Harvard University, and an AM degree in applied mathematics from Harvard University. He has consulted with and acted as a member of several governmental

and private forest products groups. He is an expert in timberland valuation and has written on carbon sequesterization, forest policy, and international forest prices.

ANU DAS was formerly Research Assistant with the Committee on National Statistics. In addition to the Panel on Integrated Environmental and Economic Accounting, she worked with the Panel on Statistical Methods for Testing and Evaluating Defense Systems and with the Longitudinal Research on Children Workshop. She previously worked on studies related to health, aging, disability, and census. She holds a bachelor's degree in mathematics and a master's degree in computer and information science. She currently works for the International Monetary Fund.

GRAHAM DAVIS is Assistant Professor of Mineral Economics at the Colorado School of Mines. His research includes the valuation of mineral assets, and he is the recipient of an Environmental Protection Agency/National Science Foundation grant to investigate methods of incorporating these valuations into "green" national income accounting exercises. Before his academic career, he worked as a metallurgical engineer at mines in Namibia and Canada. He has an MBA in finance from the University of Cape Town and a Ph.D. in mineral economics from Pennsylvania State University. In 1996, Pennsylvania State University's College of Earth and Mineral Sciences elected him Centennial Fellow for his contributions to the field.

JOSHUA S. DICK is Senior Project Assistant with the Committee on National Statistics. In addition to working with the Panel on Integrated Environmental and Economic Accounting, he works with the Panel To Study the Research Program of the Economic Research Service (ERS), a Study to Review the Statistical Procedures for the Decennial Census, and a Study on Conceptual, Measurement, and Other Statistical Issues in Developing Cost-of-Living Indexes for Indexing Federal Programs. He holds a bachelor's degree in political science with honors from Florida Atlantic University and served as an intern for U.S. Senator Connie Mack. He is a member of Pi Sigma Alpha, the national political science honor society, and is an Eagle Scout with the Boy Scouts of America.

ROBERT EISNER was William R. Kenan Professor of Economics, Emeritus, at Northwestern University. He was a past president of the American Economic Association and a fellow of the American Academy of Arts and Sciences and the Econometric Society. He worked to extend the conventional National Income and Product Accounts and develop more compre-

hensive measures of output, market and nonmarket activity, investment, and the products of governments and households.

PETER M. FEATHER is employed by the U.S. Department of Agriculture's Economic Research Service as a research economist. He received his Ph.D. in applied economics in 1992 from the University of Minnesota. His research interests include nonmarket valuation methods, welfare measurement, and labor economics.

DANIEL HELLERSTEIN is Natural Resource Economist for the Economic Research Service of the U.S. Department of Agriculture. He received his Ph.D. from the Yale School of Forestry and Environmental Studies in 1989, He has published widely in the environmental economics literature, with a primary focus on the valuation of environmental benefits using travel-cost models. He is also the author of several publicly available software suites, including modeling packages used in the construction and econometric analysis of travel cost and other valuation models, Internet server software, and other utilities.

JAMES HRUBOVCAK is Economist with the Economic Research Service of the U.S. Department of Agriculture. He has conducted research in the areas of agricultural sustainability and environmental accounting. In addition, he has investigated factors affecting the capital structure of and investment in agriculture, with emphasis on the economics of taxation and the farm sector. He received his Ph.D. in economics from The George Washington University

EDWARD C. KOKKELENBERG, study director, is Associate Professor and Chairman of the Department of Economics, Binghamton University (SUNY). He joined Binghamton in 1980 after earning his Ph.D. in economics from Northwestern University. His teaching and publications have focused on energy, forecasting, the demand for capital and labor, productivity, and capacity utilization. He is a member of the American

BRIAN NEWSON, a mathematician and economist by training, is with the National Accounts Directorate at Eurostat (the Statistical Office of the European Union). He played a central role in the revision of the international System of National Accounts. He now works on developing environmental accounting in Europe.

HENRY M. PESKIN is President of Edgevale Associates, a consulting company. He was formerly on the staffs of the National Bureau of Economic Research, the Urban Institute, and the Institute for Defense Analysis. Most recently, he was a senior fellow at Resources for the Future. With training in chemical engineering, an undergraduate degree in political science, and a graduate degree in economics, he has written extensively on methods to expand the national economic accounts in order to better measure resource and environmental degradation. As a consultant to the World Bank and the U.S. Agency for International Development, he has surveyed environmental accounting practices in industrialized countries and has advised developing countries on the design and implementation of environmental accounting systems.

JOHN REILLY is Associate Director for the Joint Program on Science and Policy on Global Change at the Massachusetts Institute of Technology energy laboratory. He was Deputy Director of the Natural Resource and Environment Division of the U.S. Department of Agriculture's Economic Research Service during the writing of this report. He holds a Ph.D. in economics from the University of Pennsylvania. He has written numerous articles, chapters, and books in the areas of climate change, agriculture, and natural-resource economics.

ROBERT REPETTO is Tim Wirth Fellow in the Graduate School of Public Affairs at the University of Colorado at Denver. He is also an advisor at Stratus Environmental Consulting, Inc., in Boulder, Colorado. Before moving to Boulder, he was Vice President of the World Resources Institute (WRI), a nonprofit policy research center in Washington, D.C., and he remains affiliated with WRI as Senior Research Fellow. He is known for his writings and research on the interface between environment and economics and on measures to promote sustainable economic development. He is currently a member of the National Research Council's Board on Sustainable Development (Population Division) and recently completed a 3-year term on the Environmental Economics Advisory Committee of the Environmental Protection Agency's Science Advisory Board. He has been

awarded a Pew Fellowship in Marine Conservation for the period 1998-2000. He has been a Professor at the Harvard School of Public Health, a World Bank official working in Indonesia, an economic advisor in Pakistan, a Ford Foundation staff economist in India, and an economic analyst at the Federal Reserve Bank of New York.

JOHN E. TILTON is William J. Coulter Professor of Mineral Economics at the Colorado School of Mines. He is also a university fellow at Resources for the Future and a past president of the Mineral Economics and Management Society. His teaching and research interests over the past 25 years have focused on economic and public policy issues associated with the mineral industries. He has served as Vice-Chair of the Board on Mineral and Energy Resources and as a member of a number of other National Research Council boards and committees.

VICTORIA J. TSCHINKEL, a zoologist by training, is Senior Consultant for Strategic Environmental Management with Landers and Parsons, P.A. She served as Secretary of the Florida Department of Environmental Regulation from 1981 to 1987. She is currently a member of the Commission on Geosciences, Environment, and Resources; a corporate director for a major petroleum company; a director of the German Marshall Fund; a director of Resources for the Future; and a member of the Board of the University of Chicago Governors of Argonne National Laboratory. She is a

director of 1000 Friends of Florida and Florida Communities Trust. She has served on numerous committees of the National Research Council on a wide range of topics.

MARTIN L. WEITZMAN is Ernest E. Monrad Professor of Economics at Harvard University. Previously, he was Mitsui Professor of Economics at the Massachusetts Institute of Technology. He has been elected a fellow of the American Academy of Arts and Sciences and of the Econometric Society. He has written extensively on environmental economics and on biodiversity and was awarded the prize for publication of enduring merit from the Association for Environmental and Resource Economics.

Next: References »
Nature's Numbers: Expanding the National Economic Accounts to Include the Environment Get This Book
× 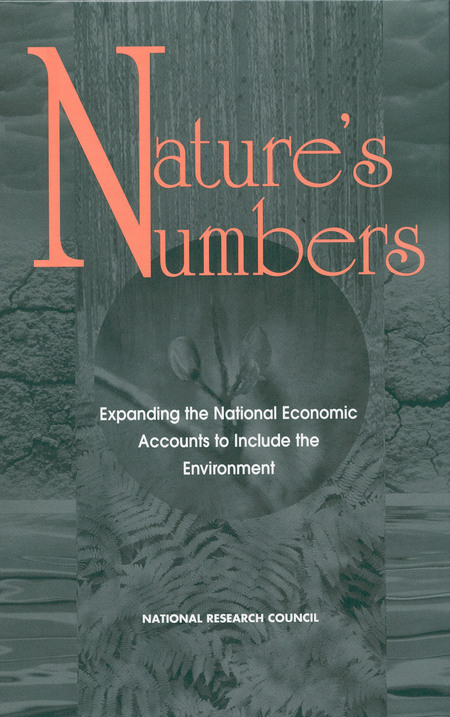 In order to really see the forest, what's the best way to count the trees? Understanding how the economy interacts with the environment has important implications for policy, regulatory, and business decisions. How should our national economic accounts recognize the increasing interest in and importance of the environment?

Nature's Numbers responds to concerns about how the United States should make these measurements. The book recommends how to incorporate environmental and other non-market measures into the nation's income and product accounts.

The panel explores alternative approaches to environmental accounting, including those used in other countries, and addresses thorny issues such as how to measure the stocks of natural resources and how to value non-market activities and assets. Specific applications to subsoil minerals, forests, and clean air show how the general principles can be applied.

The analysis and insights provided in this book will be of interest to economists, policymakers, environmental advocates, economics faculty, businesses based on natural resources, and managers concerned with the role of the environment in our economic affairs.