Separation Technologies for the Industries of the Future (1998)

Get This Book
Visit NAP.edu/10766 to get more information about this book, to buy it in print, or to download it as a free PDF.
« Previous: 7 Metal Casting Industry
Page 74 Share Cite
Suggested Citation:"8 Glass Industry." National Research Council. 1998. Separation Technologies for the Industries of the Future. Washington, DC: The National Academies Press. doi: 10.17226/6388.
×

All commercial glasses are based on silica. Other major oxide constituents include boric acid, alkali, alkaline earths, and aluminum oxide. Depending on the

characteristics of the finished product, numerous other oxides may be added. For many types of glass, 20 to 40 percent cullet (waste glass) is added. Cullet requires approximately 10 percent less energy to heat to the molten state (compared with virgin raw materials) and increases the efficiency of the melting process, thereby conserving energy. The use of cullet also reduces waste and raw material costs.

During the melting and fining process, raw materials are melted, gaseous impurities are removed from the molten glass, and chemical reactions occur to form the final glass compound. The major separation issue for this process is air emissions. As raw materials are fed into the furnace, volatile compounds in the raw materials and molten glass are released, and gases, such as nitrogen oxides, are formed. These gases entrain sulfur oxides and alkali ions, which are vaporized and carried out of the system. Fine particulates, ranging in size from 0.1 to 5 µm, are generated from raw material dust and volatile condensates (e.g., sulfates and borates). Approximately 0.5 to 2 pounds of particulates are produced per ton of glass.

These gases and fine particulates are difficult to collect, especially the fine particulates at higher temperatures. Methods currently in use include aqueous emission control devices, electrostatic precipitators, high energy scrubbers, bag-house filters, and selective noncatalytic reduction. Unfortunately, these air pollution control devices produce solid waste residue, wastewater, and/or require large amounts of energy. Some captured material (e.g., sulfates, borates) can be processed for recycling into the batch charge. Better methods for the separation and capture of gases and fine particulates at high temperatures would benefit the glass industry.

Another separation problem associated with the melting and fining process is the removal of glass from spent refractory materials. This is of particular concern when a high-lead glass has been melted in the furnace. An economical method of removing glass from furnace refractories would facilitate the recycling of these materials.

After leaving the furnace, molten glass for producing containers is mechanically formed by mold blowing, pressing, or casting. Once the glass is shaped, it is placed in an oven for controlled cooling or annealing, after which it is inspected and prepared for shipment. Damaged or defective glass is reused as in-house cullet. Lubricating oils used during the forming process, however, can cause problems with the quality of in-house cullet. These oils may leach from cullet piles, thus contaminating water, or they may increase particulate formation in the furnace. A method of separating lubricating oils from in-house cullet would be beneficial to the glass industry.

and the cullet contains numerous contaminants, such as dirt, gravel, paper, plastic, metal, and ceramics. Noncontainer glass, such as window panes, mirrors, light bulbs, drinking glasses, ovenware, and glass ceramics, is also a problem because it cannot be used to make container glass. Even a small percentage of contaminants can result in defective glass and can damage glass manufacturing equipment (GPI, 1997). The glass industry needs more efficient and cost-effective methods for sorting contaminants from postconsumer glass and for sorting different glass compositions from each other.

Once cullet has been sorted by composition and contaminants have been removed, the cullet must be sorted by color. The color purity required depends on the color of the glass being produced. For example, cullet used to produce green glass must contain less than 4 percent mixed glass, cullet used to produce brown glass must contain less than 2 percent mixed glass, and cullet used to produce clear glass must contain less than 1 percent mixed glass (GPI, 1997). The glass industry needs more efficient and cost-effective methods for separating cullet by color. Cullet is generally crushed before it is mixed with raw materials for melting. Separation methods to remove grinding media from ground glass particles would facilitate the recycling of cullet and the reuse of grinding materials in finishing and polishing operations.

Fiberglass manufacturers can use glass cullet that has not passed inspection for the container recycling industry. Currently, between 10 and 40 percent of the raw materials used by fiberglass insulation manufacturers is recycled glass. The fiberglass sector is the largest secondary market for postconsumer and industrial waste glass, using approximately 870 million pounds in 1993. Research is needed, however, to facilitate the recycling of fiberglass itself. An important separation issue for this segment is the removal or dissolution of organic coating materials on glass insulation fibers, which interferes with traditional melting technologies.

The production of specialty glasses often requires the use of solvents, such as acetone or acrylics, that end up in wastewater streams. Methods of separating solvents from wastewater would be beneficial to the specialty glass industry.

The reuse of cullet is also problematic for the specialty glass industry because the low volume of many specialty products does not justify recycling. Nevertheless, some parts of the industry are looking into the possibilities of recycling. The television glass industry, for example, is making efforts to recycle glass from used television sets and computer monitors. For this segment of the industry, separation issues include

The optical properties of materials, such as their color, induced fluorescence, and refractive index, can be used as a means of separation. A number of technologies already exist for improving the quality of cullet. Contaminants, such as paper, plastic, and metals, can be removed by hand picking, screening, and nonferrous metal separation techniques. Ceramics can be identified by an optical ceramic sorter, which uses infrared light to detect the ceramic's opacity, and separated from the cullet by air jets. A similar technology is used for separating cullet by color. Once materials are identified, the identification can be used to trigger pulsed air jets and physically separate them. Improvements to this technology would include increasing the hourly volume to make the process more cost-effective.

Oxygen has replaced air in a growing number of commercial combustion applications. Oxygen burns without producing significant amounts of nitrogen oxides, generates substantially fewer particulates, and can lower the quantity of natural gas used by as much as 25 percent. However, oxygen is more expensive than air and can cause hot spots in the melt, possibly damaging refractory materials. Oxygen is also more reactive than air and, therefore, more difficult to preheat. Research on lower cost methods of producing pure oxygen, methods of avoiding hot spots, waste heat recovery, and pretreating technologies would reduce emissions.

According to OIT's glass industry road map, cleaner processing will require improved sensors, measurement devices, instrumentation, and control technologies. Improving the environmental performance of current technologies will also require a better understanding of the fundamental mechanisms and chemistries of the glass manufacturing process. For example, the industry needs a better understanding of the formation and fate of emissions in current melting and refining technologies (Energetics, Inc., 1997).

Separation needs for the glass industry include:

Next: 9 Forest Products Industry »
Separation Technologies for the Industries of the Future Get This Book
× 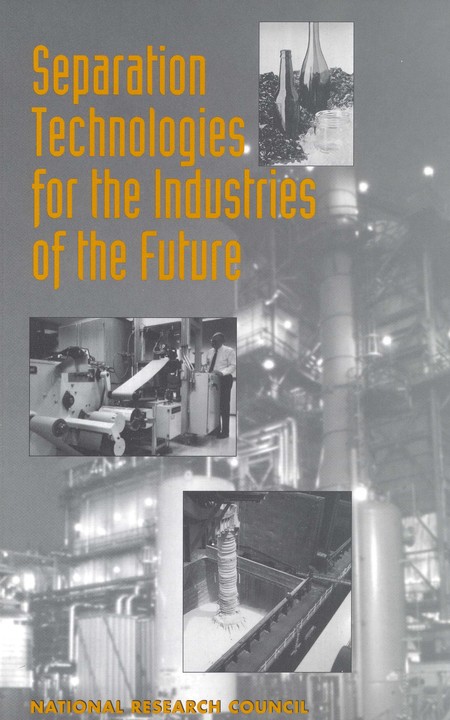 Separation processes—or processes that use physical, chemical, or electrical forces to isolate or concentrate selected constituents of a mixture—are essential to the chemical, petroleum refining, and materials processing industries.

In this volume, an expert panel reviews the separation process needs of seven industries and identifies technologies that hold promise for meeting these needs, as well as key technologies that could enable separations. In addition, the book recommends criteria for the selection of separations research projects for the Department of Energy's Office of Industrial Technology.