Infrastructure for the 21st Century: Framework for a Research Agenda (1987)

Visit NAP.edu/10766 to get more information about this book, to buy it in print, or to download it as a free PDF.
Page i Share Cite
Suggested Citation:"Front Matter." National Research Council. 1987. Infrastructure for the 21st Century: Framework for a Research Agenda. Washington, DC: The National Academies Press. doi: 10.17226/798.
×

Preface This report, In~astract~re for the 21st Centory: framework for a Research Agenda, was prepared at the request of the National Council on Public Works Improvement (NCPWI). NCPW! was created by congressional mandate as ~ ad hoc council having a tw~year life, with the my - ion to report to Congress and the President on the state of the nation's infrastructure. The mission has two purposes: (1) to improve understanding of the condition, safety, and capacity of the nation's public works facilities, and (2) to enhance the process of resource allocation. The probe associated with improving our public works in- frastructure deserve special attention. Various studies have been conducted which estunate the annual shortfall between investment requirements ~d available revenues to attain necessary system upgrades. These estunates vary from $17.4 billion (Congressional Budget Office, 1983) to $24.6 billion (Joint Econo~ruc Committee of Congress, 1984) to $71.7 billion (Associated General Contrac- tors of America, 1983), but all point to large annual shortfall and a need for action to bridge the shortfall. Technology opera a partial solution to some of the problems that face the nation within infrastructure systems. To help meet L'C

its Congressional mandate, the NCPW} asked the National Ret search Council to address three issues with regard to infrastructure technology: promising research areas for the technological improvement of infrastn~cture; factors governing the adoption or rejection of technological innovations; and, the means for developing and carrying out a national ret search agenda to foster innovative research for ~nfrastruc- ture systems. The charge to the Research Council clearly spanned its insti- tutional boundaries; the nature of the subject is not simply en- gineering or urban policy, but demands a spectrum of knowledge found in different units of the Research Council. Accordingly, the study was organized as a cross-institutional activity. The mem- bership of the study committee, the Committee on Infrastructure Innovation, was derived from nominees proposed by the applicable Research Council units including the Commission on Engineering and Technical Systems, the Transportation Research Board, and the Commission on Behavioral and Social Sciences and Education. Participation within these units came from the Marine Board, the National Materials Advisory Board, the Building Research Board, the Board on Geotechnical Engineering, the Water Science and Technology Board, and the Committee on National Urban Policy. The committee and pane} members were selected for their special expertise and experience in all modes of infrastructure, including highways, water supply, solid waste, mass transit, waster water treatment, energy utilities, water resources, air transport, and hazardous waste management. The group was diverse, with members drawn from government, academia, and industry. The committee met three times over a fin - month period as a full committee and several times in subgroups. One of these meet- ings was organized as a workshop, and included some 33 additional people who helped the committee greatly in refining and respond- ing to its task. At the outset, the committee recognized that its charge was broad and that the committee would have to work with several limitations, two of which would be time and resources. More importantly, the committee felt that a larger constituency than encompassed by the eleven committee members was needed to address some of the issues included under its charge. Thus, to x

create a comprehensive research agenda on infrastructure and to design an effective organization to serve as a focus and stimulus for that agenda, the active involvement of the affected constituen- cies representing transportation, solid and liquid waste treatment, water supply, corrununication~, power, and other components of the infrastructure system would be required. The committee never saw a realistic way to involve Al of these constituencies In its initial effort to define a research agenda on infrastructure. The committee faced a difficult task: to define an ambitious program in a subject for which definitions differ and for which there is no single constituency In government, industry, or acade~xua. believe a reasonable beginning toward this national focus has been made. It is the result of difficult, expert, and diligent work of a great many peopIc the committee itself, the workshop attendees, those who corresponded with the committee, the staff of the Na- tional Council on Public Works Improvement, and the staff of the National Research Council. Lawrence Dahmm, Chairman Committee on Infrastructure Innovation act

Next: Executive Summary »
Infrastructure for the 21st Century: Framework for a Research Agenda Get This Book
× 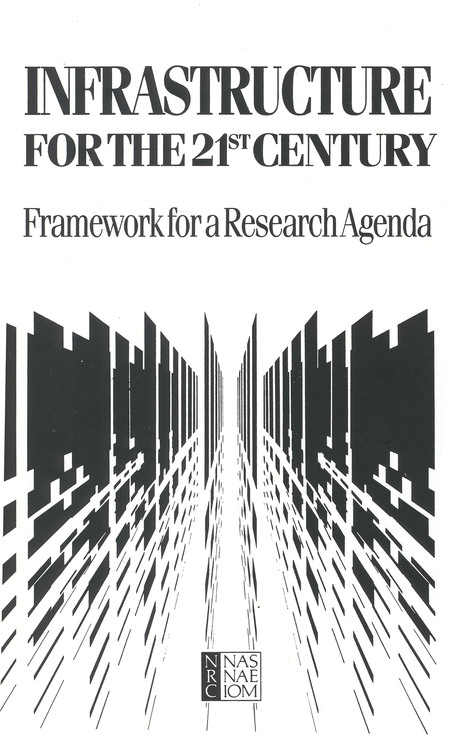 Buy Paperback | $45.00
MyNAP members save 10% online.
Login or Register to save!
Stay Connected!