Visit NAP.edu/10766 to get more information about this book, to buy it in print, or to download it as a free PDF.
Page i Share Cite
Suggested Citation:"Front Matter." National Research Council. 1985. Epidemiology and Air Pollution. Washington, DC: The National Academies Press. doi: 10.17226/841.
×

ACKNOWLEDGMENTS vi Acknowledgments Many persons provided the Committee and staff with helpful information, suggestions, and the benefits of their experience during preparation of this report. We wish especially to express our gratitude for contributions made by Edward Baker, Roger Detels, Jack Hackney, Carl Hayes, Kaye Kilburn, Brian Leaderer, Samuel Marcus, Jean McRae, Rene Mendes, Paul Morrow, Marvin Schneiderman, Kirk Smith, and Warren Muir. We also wish to thank Barbara Mandula, who helped organize the project in its early stages and contributed substantially to its completion; Danny Kao and Christopher Wendel, who also helped finish it; Edna Paulson and Victor Miller, of the Toxicology Information Center, who provided continual access to the literature; and Gunther Craun, of the Environmental Protection Agency (EPA), our project officer. Devra Lee Davis, Executive Director of the Board on Toxicology and Environmental Health Hazards, provided valuable assistance in review throughout this project, and Alvin G. Lazen, Executive Director of the Commission on Life Sciences, offered much helpful advice. Without the support of Bernard Goldstein and Roger Cortesi of EPA, the project would not have been possible. Without the editorial work of Norman Grossblatt, it would have been a great deal more difficult to read about; he edited the entire report with the utmost degree of efficiency and professional judgment. Finally, the extraordinary skill and unselfish dedication of James Lanear and Mary Ellen Scheckenbach were evident to all who witnessed or participated.

PREFACE vii Preface The Committee on the Epidemiology of Air Pollutants dealt with a difficult charge under severe time constraints. That it completed its task well and on time is a credit to both its members and its dedicated and outstanding National Research Council scientific staff colleagues. Dr. Peter Gann in particular assumed major responsibility for coordinating, translating, and negotiating ideas, opinions, and insights among and between Committee members, consultants, and responsible NRC executives. The Committee's report is about epidemiology, but is not written for epidemiologists. It is a written answer to a specific charge from EPA administrators. In the Committee's view, the report to the EPA administrators is likely to be of interest to a much wider audience of federal and state air pollution control program directors, as well as to a variety of scientists concerned with air and industrial pollution questions. These scientists will mostly be in other scientific disciplines and have a need either to work with epidemiologists or to use epidemiologic strategies. The Committee members met and shared a wide variety of opinions about the match between pertinent air pollution research questions and current epidemiologic concepts and strategies. These individuals had been chosen for their diversity of expertise, experience, and opinions, and they devised a work plan that would use this diversity to full advantage. The Committee established a common base of state-of-the-art knowledge through the circulation and discussion of background papers prepared by its own experts. It then implemented its functional plan that depended upon meetings of small ad hoc working groups of members. These interdisciplinary working groups developed conceptual and operational approaches to assigned segments of the work at hand. The work was carried out in three phases, which moved from the most general to the most specific subject matter and from development of consensus to the preparation of the first drafts of chapters of the report. The composition and leadership of the groups were deliberately changed as work progressed. Every effort was made to concentrate attention on critical issues and ideas that had not been fully explored or reviewed in the recent literature and to avoid either discussing or writing about subjects for which good recent reviews were available. Some of the Committee's working concepts and guidelines mentioned in the report itself are worth highlighting here. It concentrated on long-term respiratory morbidity in relation to ambient air pollution. This was an expedient choice based on past and present research priorities and without reference to any changes in the relative importance of short-term respiratory effects and short- and long-term effects in other organ systems as smoking habits change. It concerned itself more

PREFACE viii with public than with personal health and more with morbidity than with mortality. This was another decision taken to expedite and focus the Committee's effort. It does not imply that clinical observations and mortality data should be disregarded by future investigators. The full Committee agreed upon the most important research questions in air pollution and used them to test the practicality of its conclusions and recommendations. Some of this work is included in the report to illustrate ways in which epidemiologic methods can be applied to current air pollution research questions. The Committee's conceptual approach is a little different from the usual. It used a working concept of ambient air as âthe air breathed in 24 hoursâ and ambient pollution as âthe pollutants in breathed air.â In its thinking, it did not try to separate that part of the air breathed in and out each day by an average man or woman that comes from indoor, outdoor, or occupational sources. This definition accepted a very heterogeneous exposure to pollutants, pollutant mixtures, and their concentrations. The synergistic as well as additive effects of mixtures of pollutants were an important facet of this heterogeneity. Another working concept made explicit by the Committee is that irritants like cigarette smoke reach the lungs in the medium of breathed air, which can potentiate or reduce their biological impact. A public health perspective is maintained throughout the report with reference to attributable risk and to effects that are harder to distinguish among individuals than among populations. Finally, the Committee conducted its own deliberations about research strategies and methods keeping in mind total sources of bias in any epidemiologic air pollution research project. The report itself was prepared and edited by Committee members before it was sent to consultants and reviewers. The distributed responsibilities for writing put an additional burden on the entire staff of the Committee. The report could not have been completed in time without their uniform and continual responsiveness and patience. Maureen Henderson Chairman Committee on the Epidemiology of Air Pollutants

Next: Executive Summary »
Epidemiology and Air Pollution Get This Book
× 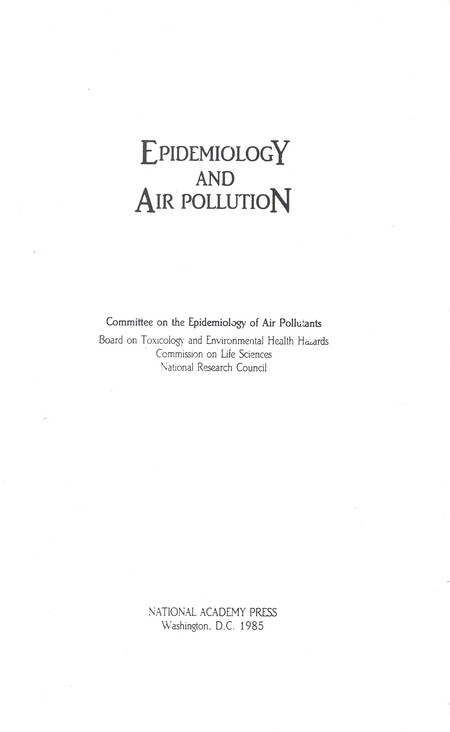