Visit NAP.edu/10766 to get more information about this book, to buy it in print, or to download it as a free PDF.
« Previous: References
Page 232 Share Cite
Suggested Citation:"INTRODUCTION." National Research Council. 1986. The Earth's Electrical Environment. Washington, DC: The National Academies Press. doi: 10.17226/898.
×

TELLURIC CURRENTS: THE NATURAL ENVIRONMENT AND INTERACTIONS WITH MAN-MADE SYSTEMS 232 16 Telluric Currents: The Natural Environment and Interactions with Man-Made Systems Louis J. Lanzerotti AT&T Bell Laboratories Giovanni P. Gregori Istituto Di Fisica Dell'Atmosfera, Rome INTRODUCTION Telluric currents consist of both the natural electric currents flowing within the Earth, including the oceans, and the electric currents originating from man-made systems. Telluric currents could also be considered to include geodynamo currents, i.e., the electric currents that are presumed to flow in the Earth's core and are responsible for the generation of the ''permanent" geomagnetic field. This review excludes geodynamo considerations from its purview. There has been an evolution (see Appendix) in the terminology in the English-language scientific literature related to telluric currents. A common former term used for telluric currents has been "Earth currents," a term that was widely used by Chapman and Bartels (1940) in their classic work, whereas Price (1967) preferred "telluric currents." A difference between the two terms can be recognized in reading historical papers: an impression is obtained that Earth's currents was the name applied to the natural currents (or, more properly, voltages) that are measured between two electrodes which are grounded at some distance apart. Independent of the cause, the observed current was termed an Earth's current. It later became evident that electric currents also flow in seawater. Therefore, the term telluric currents can be interpreted to include currents flowing both within the solid Earth and within the seas and oceans. However, we note that Earth currents and ocean currents do not form independent electric-current systems. On the contrary, leakage currents exist between continental areas and oceans (see, e.g., references in Gregori and Lanzerotti, 1982; Jones, 1983). In the early French and Italian scientific literature on the subject, however, the term telluric (derived from the Latin tellus, for Earth) was always used (e.g., Blavier, 1884; Battelli, 1888; Moureaux, 1896). The fundamental causes of telluric currents are now believed to be understood. They are produced either through electromagnetic induction by the time-varying, external-origin geomagnetic field or whenever a conducting body (such as seawater) moves (because of tides or other reason) across the Earth's permanent magnetic field. Both causes produce telluric currents, which, in turn, produce magnetic fields of their ownâfields that add to the external origin geomagnetic field and produce a feedback on the ionosphere current system (a feedback that, however, is negligible; see, e.g., Malin, 1970). The complexities associated with telluric currents arise from the complexities in the external sources and in the conductivity structure of the Earth itself. Such complexities have led earlier workers to make statements such as "the simple laws of electromagnetic induction do

TELLURIC CURRENTS: THE NATURAL ENVIRONMENT AND INTERACTIONS WITH MAN-MADE SYSTEMS 233 not fully explain the cause of geoelectric and geomagnetic activity" (Sanders, 1961), while Winckler et al., (1959), in discussing a 2650-V drop across a transatlantic cable produced during a magnetic storm (see below) concluded " â¦ either the current circuit [in the Atlantic] is in the horizontal plane or the currents are not the result of the induced emf." The mathematical modeling of telluric currents, unlike the understanding of their physical causes, is still far from a satisfactory solution. As far as Earth currents are concerned, the investigations have been for the most part carried out on a local or limited regional scale. In contrast, the understanding of oceanic telluric currents (which cover a considerable fraction of the Earth's surface) has, since the Ashour (1950) estimate of their decay time in an ocean (order of a few hours), undergone substantial progress. The state of the art of ocean-current modeling now takes into account coastlines, although the ocean bottom is usually assumed flatâ; either nonconducting (although with a conducting mantle; see e.g., Parkinson, 1975; Hobbs and Brignall, 1976; Hobbs and Dawes, 1980; Beamish et al., 1980; Fainberg, 1980, and references therein) or conducting (Hewson-Browne, 1981; Hewson-Browne and Kendall, 1981; Kendall and Quinney, 1983). The ocean currents and their related geomagnetic effects have been investigated by, for example, Barber and Longuet- Higgins (1948), Fraser (1965), Peckover (1973), Klein et al., (1975), and Semevskiy et al. (1978). Malin (1970, 1973), in considering the lunar tidal harmonic component M2 (which is the most important one both in the atmosphere and in the sea, with a period of half a lunar day), succeeded in separating the effect of direct electromagnetic induction from the ionosphere from the currents produced by oceanic tidal flow. He assumed that the geomagnetic variation associated with the tidal component should always be observed, independent of local time, whereas the ionosphere component should be negligible at midnight. In fact, he found that at Irkutsk, the geomagnetic observatory farthest from any ocean, the ocean-produced effect is negligible, unlike the situation at several other observatories closer to a coast, where the ocean component is present. No equivalently sophisticated modeling, even for long-period geomagnetic variations, can usually be found for Earth currents. This situation exists principally because of the frustrating indeterminacies introduced by local Earth conductivity anomalies. The basic difficulty arises because of the nonuniqueness of the "inversion problem," that is, the nonuniqueness of the evaluation of the underground conductivity structure in terms of the surface geoelectromagnetic recordings. Therefore, the problem is usually tackled in terms of the "forward problem": an external-origin electromagnetic field is assumed to impinge on an underground conducting structure of given geometrical shape, with only the conductivities left to be optimized by a numerical fitting of the model with the actual observational records. The procedure can be worked out only for reasonably simple geometrical shapes (Porstendorfer, 1976) for the conducting bodies, which implies substantial limitations to any attempt to extend such investigations to wider spatial scales (see e.g., Rokityansky, 1982; Hohmann, 1983; Parker, 1983; Varentsov, 1983). In terms of planetary-scale currents, Gish (1936a, 1936b) presented the results of Figure 16.1, which he deduced for the daytime western hemisphere from diurnal variation (24-h period) recordings of orthogonal Earth current measurements collected during the second International Polar Year (1932-1933) at a number of sites around the world. The directions of current flow were determined by taking the vector sum of the N-S and E-W currents measured at the various sites. Large errors could be expected because of the sparse number of stations and the need, therefore, for large interpolations. A more recent picture has been provided by Matsushita and Maeda (1965a, 1965b; see also Matsushita, 1967) from analyses of the worldwide geomagnetic field on a planetary scale. These authors performed a standard separation (by means of Gauss' spherical harmonic expansion) of the external-and internal-origin field. Some of the results are presented in Figure 16.2. Notice the obvious, substantial differences compared to the currents of Figure 16.1. However, even the more recent work is obviously unable to recognize the effects, where important, of localized anomalous conductors, such as mid-oceanic ridges, or even the differences between ocean basins and continents. In fact, spherical harmonics vary too smoothly to be able to account for such localized features, particularly if a reasonably limited number of terms is used in the expansion (for recent reviews of spherical harmonic techniques, see Winch, 1981; Fainberg, 1983). The first 75 to 100 years of Earth current work produced considerable debate as to causes and disagreements among researchers as to the magnitude of the effect at given times. Gish (1936a, 1936b) noted that better agreement between independent measurements often occurred when relatively long lengths of wire were used. Today it is clear that such a situation could easily arise from experimental procedures such as improper grounding of a wire and an insufficiently high impedance in the measuring system (e.g., see Hessler, 1974). For example, in the work of Airy (1868) the wires were grounded to water pipes, which themselves obviously

Next: The Physical Problem: Hydrology, Geology, Geothermics, and Tectonics »
The Earth's Electrical Environment Get This Book
× 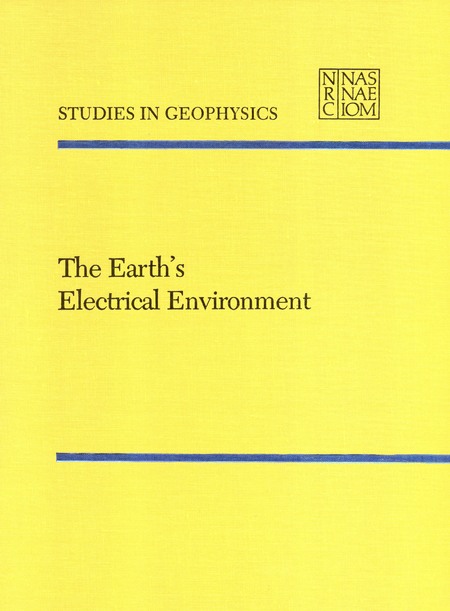 This latest addition to the Studies in Geophysics series explores in scientific detail the phenomenon of lightning, cloud, and thunderstorm electricity, and global and regional electrical processes. Consisting of 16 papers by outstanding experts in a number of fields, this volume compiles and reviews many recent advances in such research areas as meteorology, chemistry, electrical engineering, and physics and projects how new knowledge could be applied to benefit mankind.