Visit NAP.edu/10766 to get more information about this book, to buy it in print, or to download it as a free PDF.
Page i Share Cite
Suggested Citation:"Front Matter." National Research Council. 1986. A Relationship Restored: Trends in U.S.-China Educational Exchanges, 1978-1984. Washington, DC: The National Academies Press. doi: 10.17226/899.
×

A Relationship Restored Irends in U. S.-China Eclucational Exchanges, 1978-1981 David M. Lampton with Joyce A. Madancy and Kristen M. Williams for The Committee on Scholarly Communication with the People's Republic of China NATIONAL ACADEMY PRESS Washington, D.C. 1986 t

National Academy Press 2101 Constitution Ave., NW Washington, DC 20418 NOTICE: The project that is the subject of this report was sponsored by the Committee on Scholarly Communication with the People's Republic of China. Those responsible for the report were chosen for their special competences and with regard for appropriate balance. The report has been reviewed by a group other than the authors. This study was made possible by funds provided by the Bureau of Educational and Cultural Affairs of the United States Information Agency under the authority of the Fulbright-Hays Act of 1961 and by the Ford Foundation. The Committee on Scholarly Communication with the People's Republic of China (CSCPRC) is jointly sponsored by the American Council of Learned Societies, the Social Science Research Council, and the National Academy of Sciences. The Academy provides an administrative base for the CSCPRC. Since the normalization of diplomatic relations between the United States ant] China in 1979, the CSCPRC has developed programs with the Chinese Academy of Sciences (CAS), the Chinese Academy of Social Sciences (CASS), and the State Education Commission, in addition to those with the China Association for Science and Technology (CAST), with whom CSCPRC began exchanges in 1972. Current activities include a program for Ameri- can graduate students and postdoctoral scholars to carry out long-term study or research in affiliation with Chinese universities and research institutes; a short-term reciprocal exchange of senior-level Chinese and American scholars; a bilateral conference program; and an exchange of joint working groups in selected fields. CSCPRC programs are funded by the National Science Foundation, the U.S. Informa- tion Agency, the National Endowment for the Humanities, the U.S. Department of Edu- cation, the Ford Foundation, the Henry Luce Foundation, the John D. and Catherine T. MacArthur Foundation, the Andrew W. Mellon Foundation, the Starr Foundation, and select corporations. Library of Congress Catalog Card Number 86-61028 ISBN 0-309-03678-X Printed in the United States of America

Foreword One result of the resumption of relations between the United States and the People's Republic of China has been the development of exten- sive academic exchange programs. Thousands of Chinese students and scholars are studying and pursuing research at American colleges and universities, and many of them are returning to their homeland to play important roles in China's modernization programs. American students and scholars have been going to China in increasing numbers for study and research. Their efforts are expanding our knowledge of Chinese culture and society, and contributing to the social and natural sciences more generally. This report embraces five major aims: (1) to describe these academic exchange relationships, (2) to analyze the nature of the exchanges, (3) to assess their impact, (4) to focus attention on issues and problems, and (5) to make policy recommendations. The Steering Committee determined the initial outline and broad directions of the report and worked closely with Dr. David M. Lampton and his capable staff, who have prepared successive drafts of the report for our review. The Steering Committee therefore assumes responsibil- ity for the report. The Steering Committee believes that this report will be of broad interest to Americans and Chinese and that it will enhance efforts to improve and further develop academic ties between our two countries. George Beckmann Chairman, Steering Committee

Acknowledgments This study was made possible by funds provided by the United States Information Agency (USIA) and the Ford Foundation. Scholars, college and university administrators, foundation officials, and policymakers in both the United States and China need basic infor- mation about the magnitude, character, and impact of Sino-American academic exchanges between 1978 and 1984. Equally important, the academic relationship between China and the United States is changing so rapidly that it is time to step back and address some of the basic policy issues that have arisen. Therefore, in late 1983, the Committee on Scholarly Communication with the People's Republic of China (CSCPRC) constituted a Study Steering Committee chaired by Univer- silty of Washington Provost George Beckmann, with the membership listed on page iii of this volume. A team was assembled to undertake the research and writing. The following report is the fruit of that labor. The research and writing team is greatly indebted to George Beckmann and the other members of the Steering Committee for providing essential guidance. We are indebted to the many individuals and organizations that cooperated in the preparation of this study even though it is not possible to thank each one individually here. We must, however, express our gratitude to everyone at the universities, colleges, foundations, and professional associations who responded to our questionnaires. We par- ticularly wish to acknowledge the assistance of those universities where Kyna Rubin of the CSCPRC conducted interviews: Appalachian State vii

· ·  V111 ACKNOWLEDGMENTS University, Hofstra University, Oberlin College, Stanford University, the University of California at Berkeley, the University of Minnesota, and the University of Pittsburgh. Halsey L. Beemer, Jr., executive direc- tor of the International Advisory Panel of the Chinese University Devel- opment Project, was of great assistance in providing information concerning World Bank activities in China. Linda Reed at the National Association for Foreign Student Affairs in Washington, D.C., provided essential lists of names and guidance as we developed our survey ques- tionnaires. In addition, Mary Ernst at the Council for International Exchange of Scholars compiled much of the information on Fulbright participants. Our analysis of the impacts of academic exchanges on specific fields of study would have been impossible without the commissioned papers prepared by Joseph Birman of the City College of New York, Bruce A. Bolt of the University of California at Berkeley, Ronald Glaser of Ohio State University, Terry Sicular of Stanford University, and Sylvan Witt- wer of Michigan State University. We would also like to thank Mary B. Bullock, staff director of the CSCPRG, and Michel C. Oksenberg of the University of Michigan for making available to us the draft chapters in their forthcoming volume on Sino-American exchanges. We appreciate the cooperation of contributors to that volume as well. Cooperation in this undertaking was not limited to the private sector. Many U.S. government agencies and the dedicated individuals who work for them provided essential assistance. In particular, we thank Louise Crane, James Huskey, Joseph Simpson, and Gordon Tubbs of the USIA for their efforts on our behalf. Gene B. Marshall, Lynn Noah, Leon Slawecki, and Karl Olsson of the U.S. Embassy in Beijing each greatly facilitated our work, as did Peter Chase and James Keith of the U. S. Department of State in Washington, D. C. Finally, Ann I. Schneider of the Department of Education provided invaluable statisti- cal information on Title VI and National Defense Foreign Language fellowships. In the course of this study, some questions arose that only Chinese authorities could answer. We wish to thank China's Ministry of Educa- tion (which became the State Education Commission in 1985) and Chi- na's representatives in Washington, D.C., for their assistance in providing specific statistical and policy information. To the staff of the CSCPRC and the National Academy of Sciences' Office of International Affairs, who endured nearly two years of dislo- cation on our behalf, we express our particular appreciation. Special thanks are due Mary B. Bullock and Victor Rabinowitch for their patience, guidance, and encouragement. Patricia Tsuchitani played an

ACKNOWLEDGMENTS especially important role in this study, and we acknowledge her help with gratitude. Peggy Blumenthal and Tyrene White both played criti- cal roles in the early stages of the study, particularly in questionnaire design and preliminary analysis. Chuck Rexroad at the National Acad- emy of Sciences' Office of Automation Services helped design and implement our data analysis system and our archive of statistical infor- mation on the exchanges. We wish to express particular appreciation to Susan Walton, who edited the entire manuscript superbly and with good cheer. Finally, to Dale R. Corson, President Emeritus of Cornell University, we express our thanks for his advice and wise counsel. David M. Lampton Project Director 1: .x

Technology Transfer: Issues for the Future, 175 Future Opportunities for Cumulative and Cooperative Research, 177 Involvement in Scientific, Economic, and Technical Change in China, 177 Notes, 179 APPENDIXES A. Tables A-1 Through A-33 B. C. Institutions Responding to Asian Studies Questionnaire D. National Key Institutions E. · ~ Institutions Responding to University Questionnaire · · ~ Multivariate Analysis of the Determinants of Financial Aid Given to J-1 Visa Holders by the Chinese Government and American Universities F. Responding American Philanthropic Organizations, Professional Associations, and Other Exchange Organizations G. Protocols and Memoranda of Understanding Under the U.S.-PRC Agreement on Cooperation in Science and Technology H. CSCPRC Programs, 1972-1985 I. World Bank Group Education Projects in China I. Chinese Language Study Programs in the PRC . K. L. ~ ~ , ~ Authors of Commissioned Papers . Restricted Classes and Conferences GLOSSARY INDEX . . · · . . . . . . . . . . . CONTENTS 181 216 223 225 227 231 233 239 242 244 247 248 251 255

Next: Executive Summary »
A Relationship Restored: Trends in U.S.-China Educational Exchanges, 1978-1984 Get This Book
× 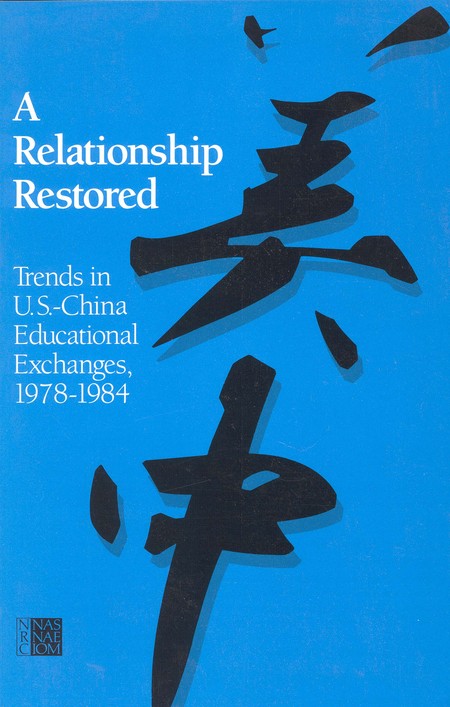 In what The Wall Street Journal calls "the first comprehensive analysis of Sino-American educational exchanges," this volume provides information on the numbers and attributes of American and Chinese students and scholars who have moved between China and the United States since 1978. This book not only supplies quantitative data on their fields of study, length of stay, and financial resources, but also discusses such qualitative issues as the problems students and scholars have encountered in carrying out their work, the adequacy of their preparation, the "reabsorption" process that students and scholars from China face upon their return home, and the impact of the exchange process on fields of study in both countries.