Visit NAP.edu/10766 to get more information about this book, to buy it in print, or to download it as a free PDF.
« Previous: B 8: Methanol
Page 169 Share Cite
Suggested Citation:"B 9: Octamethvltrisiloxane." National Research Council. 1994. Spacecraft Maximum Allowable Concentrations for Selected Airborne Contaminants: Volume 1. Washington, DC: The National Academies Press. doi: 10.17226/9062.
×

170 SMACS FOR SELECTED AIRBORNE CONTAMINANTS OCCURRENCE AND USE MOM is one of a series of compounds known as silicones. They are used as lubricants, hydraulic oils, heat transfer media, and dielectric oils; in rubber for electrical coatings, for molding, and as release agents for the food industry, metal-working applications, and rubbers, plastics, and ceramics; as water repellents for textiles, paper, masonry, and concrete; and in cosmetic and pharmaceutical formulations. A specialty product known as "silly putty" has unusual rheological properties that have made it popular as a toy for children. Medicinally, silicones have been used as antifrothing agents (antiflatulent; bronchial antifoam) and as dermal im- plants for soft tissue augmentation. MOM is used in making silicone oils or fluids designed to withstand extremes of temperature and as a foam suppressant in petroleum lubricat- ing oil. It was detected in the Skylab 4 spacecraft atmosphere at con- centrations of 105 to 138 ppb (Liebich et al., 1975). PHARMACOKINETICS AND METABOLISM No pharmacokinetic and metabolism papers were found in the literature for MOM specifically. However, some studies have been done on medi- cal-grade polydimethylsiloxane fluids. Bruggeman et al. (1984) reported on the absorption and retention of high-molecular-weight poly- dimethylsiloxanes in fish. In contrast to polychlorinated biphenyls, only very small amounts of the silicones were retained by fish after 6 w of feeding. The authors had not expected such low retention based on octanol:water partitioning coefficients. Apparently, rapid evaporation of the lower molecular weight components (including MOM) from the test food prevented a measurement of the "magnification factor" (concentration in fish/concentration in food). Because hexamethyldisiloxane (HMOS) is toxic and irritating (Rowe et al., 1948), it is clearly absorbed to some extent. It is not clear whether MOM would be absorbed during an inhala- tion exposure. Ingestion of massive amounts of silicone fluids in the rat appears to cause no local or systemic effects (Ashley et al., 1967), suggesting that the material was not absorbed. Tissue histiocytes can phagocytize silicone and migrate to other organs with it (Rees et al., 1970; Travis et al., 1985; Achauer, 1983).

OCTAMETHYLTRISILOXANE 171 TOXICITY SUMMARY A summary of the early toxicity studies performed with silicone oils can be found in a review by McGregor (1954). Rowe et al. (1948) state that "the silicones (methyl and mixed methyl and phenyl polysiloxanes) as a class are very low in toxicity and present no significant handling prob- lems." Massive feeding of animals resulted only in a laxative action similar to mineral oil (Barondes et al., 1950). There was no irritation to the skin and only mild transitory irritation to the eyes. Injections of ani- mals intramuscularly produced no reaction and led to the suggestion of the oils as nonaqueous vehicles for administration of drugs (McNamara et al., 1950). The vapor pressures of most siloxane polymers are too low to present a problem as an airborne vapor (Flaningam, 1986). If one looks at the lower boiling HMDS (boiling point, 99.5Â°C), guinea pigs and rats exposed repeatedly for 7-h periods to 4400 ppm showed no signs of discomfort, but the concentration was disagreeable to humans (Rowe et al. 1948). Expo- sure of the animals to HMDS at 40,000 ppm caused death in 15-20 min due to respiratory failure. Feeding studies with methylsiloxanes have been reported in rats (Rowe et al., 1950) and dogs (Child et al., 1951). The rats were fed a diet con- taining 0.3% methylpolysiloxane oils (DC Antifoam A) for 2 y. No adverse effects were observed based on growth, mortality, gross appear- ance and behavior, hematology, blood urea nitrogen, organ weights, hepatic lipid, and histopathology of tissues. The dogs were fed the same material at 3 g/d/kg body weight for 6 mo and also showed no ill effects. A more recent review of the toxicity of silicone oils (Clark et al., 1989) indicates that medical-grade silicones are near-inert compounds. Animal studies (mice, rats, guinea pigs, rabbits, dogs, and monkeys), including ingestion studies up to 20 g/kg, showed no ill effects (Ashley et al., 1967; Hawthorne et al., 1970; Rees et al., 1970). In humans, cosmetic injections of silicone oils were reported to cause no tissue reaction when small amounts of medical-grade silicone were used. The oral toxicity studies cited above were performed with a mixture of methyl and phenyl siloxanes. No data on the toxicity of pure MDM were found. However, the National Toxicology Program has selected this compound as a candidate for a 2-y carcinogenesis assay, reflecting a growing interest in the potential toxicity of polymers.

172 SMACS FOR SELECTED AIRBORNE CONTAMINANTS EXPOSURE LIMITS No limits were found to have been set by other organizations. RATIONALE The most pertinent toxicity data are reported by Rowe et al. (1948) for HMDS and dodecamethylpentasiloxane (DMPS). Structurally, these two compounds bracket MDM and provide the basis for setting SMACs from structure-activity relationships (SARs). Both HMDS and DMPS were tested by single doses given by intraperitoneal injection, intradermal injection, subcutaneous injection, and oral gavage. The findings are shown in Table 9-1. TABLE 9-1 HMDS and DMPS Data Route Response Response {S~ies) Dosa~e to HMDS to DMPS Oral (rat) 10 mL/kg 0 of7 died 0 of 3 died, slight laxative Oral (rat) 30 mL/kg 0 of7 died 0 of 6 died, moderate laxative Oral (rat) 50 mL/kg 1 of 10 died (CNS 3 of 3 died depression) Intraperitoneal 0.1-10 Some deaths, local No effect (rat) mL/kg irritation, adhesion Intradermal 0.1 mL fuflammation, edema, Blebs, no local reaction (rabbit) necrosis Subcutaneous 0.1 mL Irritation, necrosis No effect (rabbit) It is clear from this table that except for the laxative effect of DMPS by oral administration, HMDS is more toxic. This effect is not relevant to the inhalation route of administration because the effect is induced by local "lubrication" of the gastrointestinal tract. More rats died after oral admin- istration of DMPS than HMDS; however, that occurred only at the extreme dosage of 50 mL/kg and is not pertinent to the inhalation route. Inhalation data are available for repeated exposures of rats and guinea

OCTAMETHYLTRISILOXANE 173 pigs to HMDS; however, no inhalation data are available on DMPS. For HMDS it was reported that 15 7-h exposures of rats to 4400 ppm only caused 10% decreases in the weights of liver and kidney (Rowe et al., 1948). Histological changes were not found in these organs or any of the others examined in this limited study. It was also reported that 20 7-h exposures of guinea pigs to 4400 ppm caused only a 10% decrease in body weight without effect on organ weights or histopathology. Changes in body weight or organ weight of this magnitude, in the absence of other changes, are not considered adverse effects. Hence, to avoid possible liver or kidney effects, 4400 ppm is considered to be a no-observed-adverse-effect level (NOAEL) for repeated exposures of guinea pigs or rats to HMDS. Unfortunately, no inhalation data are available on DMPS, so it is not possible to form a complete picture of SARs. Based on the other routes of administration, it can be concluded that DMPS is very unlikely to be as toxic by inhalation as HMDS. However, because the SAR is not complete for the inhalation route, the inhalation NOAEL estimate for HMDS (4400 ppm) is reduced by a factor of 3 to estimate a NOAEL for MDM, the compound of interest. The 7-d SMAC for MDM is calculated using that factor and others as shown below: 7-d SMAC = 4400 ppm x 113 x 1110 x (15 x 7 h)/(7 x 24 h) = 92 ppm. (SAR) (species) (time factors) Since a clear target organ or mechanism of toxic action is not known for these compounds, it is not apparent how to extrapolate to longer exposures. The conservative approach is to use Haber's rule to give 30- and 180-d SMACs of 21and3.6 ppm, respectively. The short-term SMACs may be estimated from the acute inhalation data on HMDS. For that compound, a 30-min exposure to 25,000 ppm caused no clinical effects or deaths. A NOAEL for a 1-h exposure can be esti- mated as follows: 1-h SMAC = 25,000 ppm x 113 x 1110 x 30/60 = 420 ppm. (SAR) (species) (time) The 24-h SMAC should be between that value and the 7-d SMAC

Next: B 10: Trimethvlsilanol »
Spacecraft Maximum Allowable Concentrations for Selected Airborne Contaminants: Volume 1 Get This Book
× 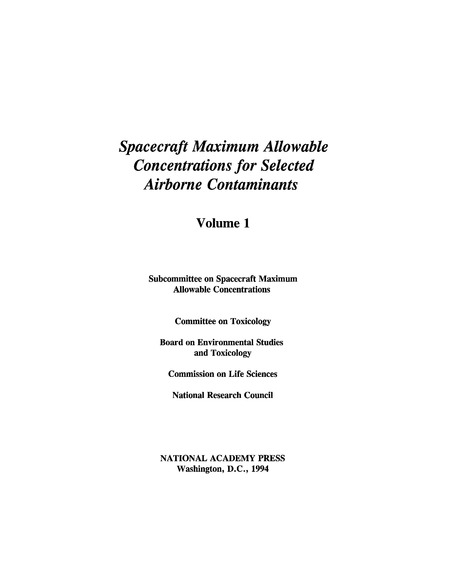