Drought Management and Its Impact on Public Water Systems: Report on a Colloquium Sponsored by the Water Science and Technology Board (1986)

Visit NAP.edu/10766 to get more information about this book, to buy it in print, or to download it as a free PDF.
Page i Share Cite
Suggested Citation:"Front Matter." National Research Council. 1986. Drought Management and Its Impact on Public Water Systems: Report on a Colloquium Sponsored by the Water Science and Technology Board. Washington, DC: The National Academies Press. doi: 10.17226/907.
×

Drought Management and Its Impact on Public Water Systems Report on a Colloquium Sponsored by the Water Science and Technology Board September 5, ~ 985 Colloquium ~ of a Series Water Science and Technology Board Commission on Engineering and Technical Systems Commission on Physical Sciences, Mathematics, and Resources National Research Council NATIONAL ACADEMY PRESS Washington, D.C. 1986

PREFACE The Water Science and Technology Board Colloquia focus attention and debate on emerging Is sues in water science, technology, and policy. These colloquia provide forums to encourage discussion and debate of certain issues which the board believes should be addressed by the scientific and engineering communities. Clearly, by initiating this discussion, the board seeks to provoke individuals to consider such issues and to stimulate research on these topics. The first colloquium addressed drought management and its impact on public water systems. The inquiry began with attempts to define drought, and ranged from the need to know more of cause and effect and improved forecasting, to the legal procedures required to implement various management alternatives. Individuals noted for their expertise in areas of drought management were invited by the board to present their views and insights on this subject at a meeting of 50 participants in Boulder, Colorado, on September 5, 1985. It is apparent that drought preparedness has suffered from neglect. Historically, research efforts have focused on problems associated with water excess rather than water deficiency. Droughts may be infrequent, or of short duration, but they can have serious and long-lasting effects on a community. In the absence of adequate preparation, a drought may cause serious disruption for water users. Analyses of records of previous droughts implies that this information is not effectively communicated or understood by successive generations of water professionals or the public. The recent drought conditions in the northeastern United v

States have focused attention on the need for water conservation and planning for future water needs. There also is a great need to educate the public about the advantages and disadvantages of proposed alternative courses of action. The colloquium keynote address delivered by Gilbert White, and presentations made by Edward Clyde, attorney; John Dracup, University of California, Los Angeles; Ben Dziegielewski, Southern Illinois University at Carbondale; and Duane Georgeson, Los Angeles Department of Water and Power provide much of the substance of this report. It was a pleasure to have had the opportunity to chair this colloquium and to synthesize the discussion contained in the report. The Water Science and Technology Board acknowledges the contributions of the participants in the colloquium and is especially grateful to those who made formal presentations. Finally, special recognition is due to Walter R. Lynn, the board's first chairman, whose idea it was to initiate this series of colloquia in the interest of water science, technology, and policy. Robert L. Smith, Chairman Colloquium on Drought Management and its Impact on Public Water Systems April 1986 V1

Next: Overview and Conclusions »
Drought Management and Its Impact on Public Water Systems: Report on a Colloquium Sponsored by the Water Science and Technology Board Get This Book
× 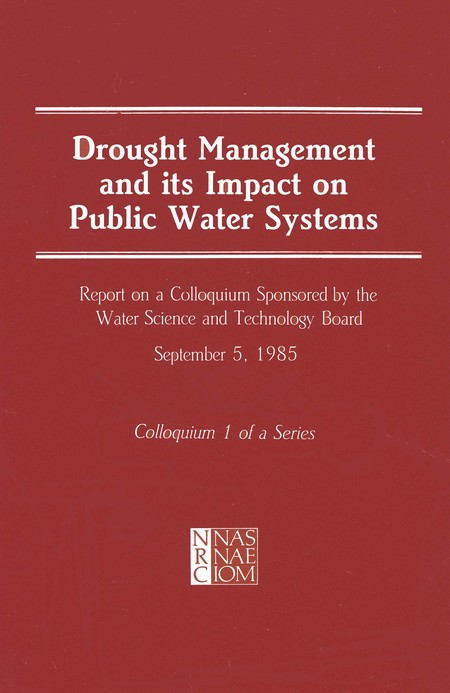 Based on a colloquium sponsored by the Water Science and Technology Board, this book addresses the need for research toward the problems of water management during drought episodes. It covers such topics as the causes and occurrence of drought, drought management options, acceptable risks for public systems, and legal and institutional aspects of drought management.